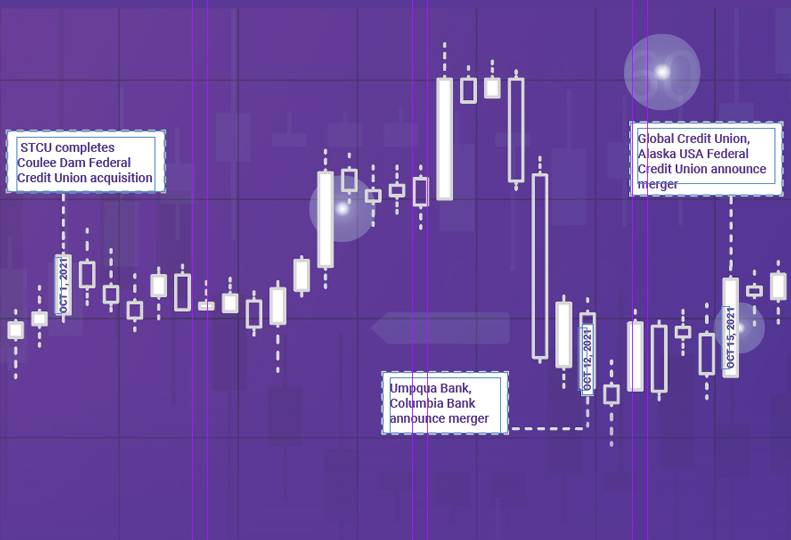 Last month, a handful of credit unions and banks with a presence here announced two mergers and completed another. It’s part of a pattern of increasing consolidation in both the credit union and banking industries, some industry leaders here say.

“The trends we’re seeing here in the region are national trends,” Forsyth says. “This is part of a broader consolidation in the finance industry. You’re going to have fewer institutions with more market share.”

Ezra Eckhardt, president and CEO of STCU, says the credit union has been involved in more acquisitions in recent years than it had been for more than a decade.

“STCU had three bank or credit union mergers prior to that, but the last of those had been maybe 17 years before,” Eckhardt says.

Opportunities for acquisitions have occurred more frequently in recent years, he says.

“The growth in total deposits in the marketplace has put a little bit of pressure on the capital position of many of the credit unions,” Eckhardt says. In other words, financial institutions have been inundated with liquid assets due to lack of spending and government stimulus measures during the COVID-19 pandemic, which puts their asset ratios at risk.

Forsyth says that for credit unions in particular, competition has been heating up in recent years.

“There’s a lot of competition and a lot of pressure for smaller credit unions to merge with larger ones, just in terms of the ability to continue to provide services to their customers,” Forsyth says. “We’ve seen that in the traditional banking sector for a long time. You have competitive pressures where it’s harder and harder for smaller institutions to compete.”

Charlotte Nemec, president and CEO of Canopy Credit Union, says watching credit unions be acquired is daunting for small credit unions such as Canopy, which has about $181 million in total assets.

“I heard the news … about Alaska USA and Global, and I just thought, how is this going to work for us? The bigs just keep getting bigger,” Nemec says.

“It’s hard, because we don’t have the economy of scale,” Nemec says. “Everything from our vendor relationships to what we pay our employees hits our bottom line a lot harder than it hits the big boys.”

Forsyth says smaller credit unions often struggle if they try to offer more services in an attempt to remain competitive.

“The problem is, for some of the smaller credit unions, trying to broaden services increases costs in a way that may be difficult to maintain,” Forsyth says.

“At least in Eastern Washington, some of these smaller communities aren’t growing much,” Forsyth says. “That may be another pressure for smaller credit unions serving rural areas to look for a larger partner.”

Eckhardt says most of STCU’s 156,000-plus members are in Spokane County and Kootenai County.

“We’ve looked for opportunities to expand that presence outside of the two-county space,” Eckhardt says. “We’re looking to create a more scalable network across Eastern Washington and North Idaho.”

Smaller institutions that capture a solid foothold in their market risk attracting the attention of larger, acquisition-hungry banks.

“If you’re very successful, then you become an attractive acquisition for a larger bank, and at that point, it’s pretty hard for the shareholders of the small, successful bank to say no to a good acquisition price,” Forsyth says.