Projects will complete CU’s overhaul of its offices 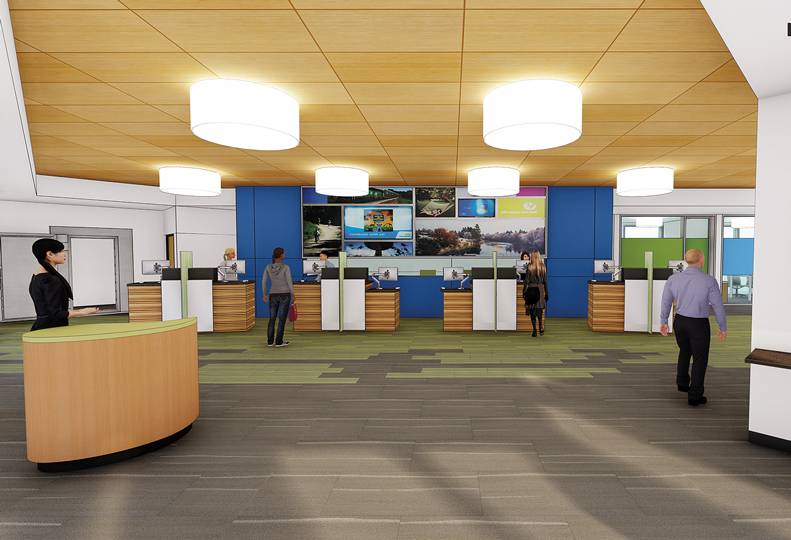 -Bernardo|Wills Architects PC
The Lyons Avenue branch, first built in 1970, will be converted into the Numerica Credit Union’s open-concept design. Many of its other offices already have been retrofitted with this look.

Numerica Credit Union plans to renovate two of its Spokane branches this year.

Chelsea Maguire, content and communications manager at Spokane Valley-based Numerica, says the credit union’s branches at 303 E. Lyons, on the North Side, and at 2202 E. 29th, on the South Hill, are the last two in the Spokane-North Idaho area to be renovated in an overhaul of Numerica’s branch locations toward open concept designs.

“We’ve been focusing heavily on the relationship building that we can do with our members whenever we interact with them,” Maguire says. “If you need a little extra time or you’re working on a bigger transaction, we also have more private stations that we call hoteling stations.”

Work on the Lyons branch, which was constructed in 1970, is set to start this week, Maguire says. The renovation of the 4,900-square-foot building is expected to wrap up by January and will cost about $900,000.

“For the Lyons branch, we’re doing a complete overhaul of the interior,” Maguire says. “The entire lobby will be closed during that first phase of construction, and then the second phase will focus heavily on the drive-thru.”

Renovations at the 4,400-square-foot 29th Avenue branch, constructed in 2001, are expected to begin in June, and likely will be completed by March 2022, Maguire says. Similar work will be done at both branches, so the cost for both is expected to be about the same.

Spokane-based Bernardo|Wills Architects PC designed the renovations. Leone & Keeble Inc., also of Spokane, is the contractor on both projects.

Maguire says each renovation will be completed in two phases, beginning with the lobby and ending with the drive-thru.

“Numerica made the decision, when we created this new template for our branches, to remove the drive-thru tellers,” Maguire says. “We have replaced that with enhanced ATMs that can handle almost any daily transaction that people need.”