Structure to be across Monroe from YMCA 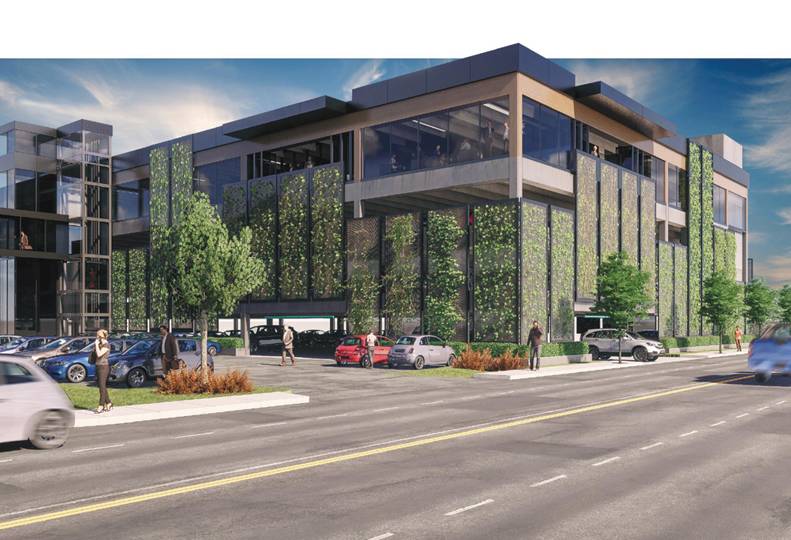 -Uptic Studios Inc.
As designed, the Monroe Court II building will be five stories tall and have three levels of parking space and two levels of office space. A construction start date hasn’t been determined yet.

A $10 million office building is envisioned along the 900 block of north Monroe Street, north of downtown Spokane.

Spokane-based architectural design firm Uptic Studios Inc. is the project architect. The site currently is a parking lot at 901 N. Monroe, next to the Monroe Court building and across the street from the Central Spokane. The Spokane County Assessor’s office lists the Monroe Court Ltd. Partnership as the property owner.

Matthew Collins, who owns Uptic, declines to comment on whether Dewood is involved in the project, citing the developer’s desire to remain anonymous.

The proposed structure would have 200 parking spaces with about 30,000 square feet of office space. Collins says the project has drawn interest from potential tenants, and the issue of providing parking was important to those parties.

A construction start date has yet to be determined.

“Prior to the pandemic, he wanted to get into ground this year,” Collins says, who adds some of the proposed tenants have existing “parking needs,” which may make getting construction started this year a higher priority.

At the center of the cluster of older-model, concrete-heavy designed buildings is the Spokane Public Safety Building, which houses Spokane Municipal Court, the Spokane Police Department, and Spokane County Sheriff’s Department offices.

Collins says the goal is to create an aesthetically appealing building in a heavily urban location.

In an effort to introduce some greenery to an area largely void of green space, Uptic Studios has designed the building with “green streams,” he says.

“They’re basically vertical, vegetative gardens that would run along the building’s exterior,” he says. “We’re excited about the project. It’s one that we think could certainly add a lot to that area.”