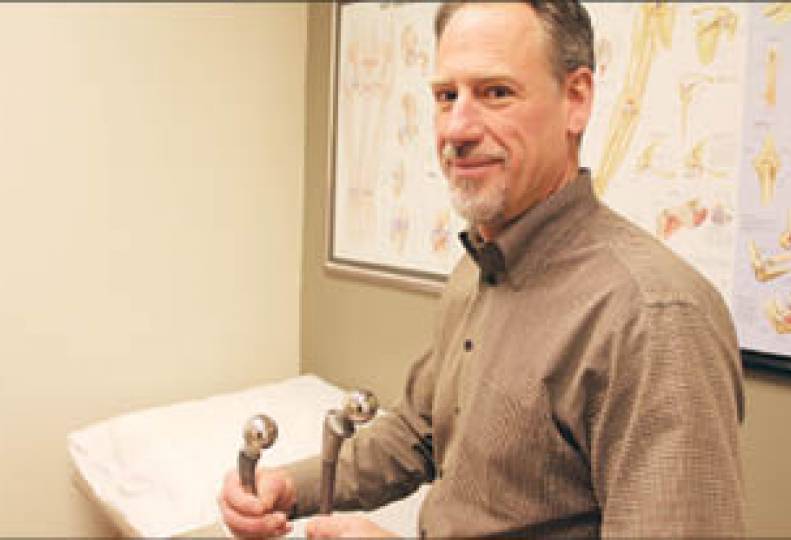 Scott, who specializes in arthritis surgery and total joint replacement, is involved in a clinical study using the device measuring changes in density of the femur bone, he says. One year into the two-year study, he says preliminary results are suggesting the device, known as the Apex ARC Stem, preserves more of the femoral bone.

Scott says he hopes to continue to test the longevity of the device in patients after the study is completed. He says he uses a bone-density scan known as DXA to help show the progression of osteoporosis, a common occurrence with hip-replacement surgery.

The ARC Stem is manufactured by Omnilife Science Inc., an East Taunton, Mass.-based company that designs and manufactures orthopedic devices.

Instead of weight being distributed further down the femur as with a more traditional hip replacement, the ARC stem places the load closer to the top of the bone, or stem, allowing weight to rest more naturally on top of the bone. Scott theorizes that the more natural load-bearing implant will decrease the likelihood of osteoporosis forming after hip-replacement surgery. The hope, he says, is that the femur bone will remain healthier for a longer period of time.

"In theory, this could last longer because it's loading the femur bone differently," says Scott, founder of the Spokane Joint Replacement Center, located in the Orthopaedic Specialty Clinic of Spokane, at 785 E. Holland.

Hip-replacement surgery using the ARC stem is designed to be a more bone-conserving procedure, Scott says.

"There's been a push to remove as little bone as possible," he says. "The less bone you remove, the more bone is available if a revision surgery is needed."

In a traditional hip-replacement surgery, the ball and most of the stem of the femur are removed. The hip replacement device, which can be made of different materials such as metal, ceramic, or plastic, is anchored by inserting it into the femur.

With the ARC stem, the surgeon performs the same procedure of removing the ball and stem, but more of the stem is reserved, and more of the femur bone is left intact, Scott says.

"In the case with the younger patients, there's a desire to make it last as long as possible," Scott says. Hip-replacement patients typically are older than 50, he says, but he has seen patients requiring surgery who are in their 20s.

Although the criterion for hip replacement varies depending on the patient, Scott says severe arthritis in the hip and decreased mobility and function typically are indicators of when surgery might be warranted. He says patients also have to be in stable health.

A hip replacement normally begins to wear out after 10 years, Scott says. The ARC stem is believed to last just as long, he says, but because less bone is removed during the initial surgery, the replacement surgery is believed to be less difficult to perform.

"Hip replacement is generally very successful," Scott says, adding that it's a surgery that has been shown in studies to improve the quality of life for people with hip problems.

Scott says the recovery time for a hip replacement varies from patient to patient, but that patients typically are up and walking the same day as the surgery.

"Younger and healthier patients bounce back so quickly," Scott says.

Scott says he performs between 200 and 300 hip surgeries annually. He estimates 30 to 40 doctors nationally are using the ARC stem. He says he plans to present his bone-density study findings at national and international arthroplasty meetings and publishing them in peer-reviewed journals.

Scott says there has been some concern about some hip-replacement products, pointing to those that used metal-on-metal joints.

He says that type of hip replacement construction has a chance of releasing metal ions, which could lead to the hip surgery failing, requiring revision surgery.

Some products, such as several manufactured by Stryker Orthopaedics, a medical technologies company based in Michigan, were recalled voluntarily by the company earlier this year. In a recall notice issued by the company, it said two of its hip-replacement models posed a risk for the device to wear out and corrode, leading to pain and swelling of the tissue around the implant.

Metal-on-metal parts by DePuy Orthopaedics and Zimmer Inc. were recalled in earlier years, equating to between 10,000 and 15,000 products nationally, Scott says.

Scott says he hasn't used any of the recalled products. The joints he uses, although by the same manufacturers, weren't the same models, he says. He says although unfortunate, these recalls represent a very small portion, about 1 percent, of total hip replacements performed in the U.S.