Pair of developers leave their tracks across West Plains 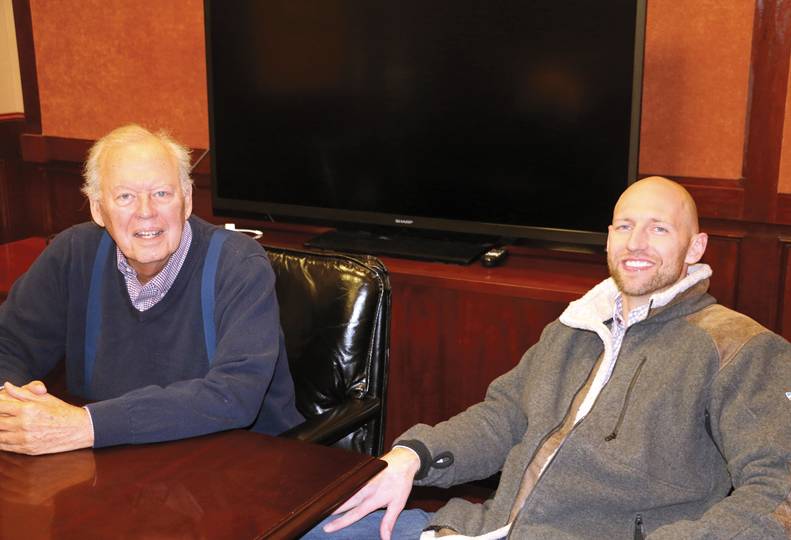 -Kevin Blocker
Veteran Spokane-area developer Dick Edwards, left, and son, Kevin, have been involved heavily in development in the Spokane area, specifically on the West Plains.

It wasn’t what was in Airway Heights that drew Spokane-area investor Dick Edwards to buy large chunks of land on the West Plains through the years.

It’s what surrounded the area that caught his eye.

“It was the interstate, a pair of interchanges, and the airport,” says Pete Thompson, who is Edwards’ long-time business partner.

“Dick is the king of the West Plains,” Thompson says. “He was the one with the vision, and I and many others have had the fortune of riding along with him.”

Born in rural northwest Arkansas, Edwards moved to Spokane from Northern California in the mid-1970s.

Prior to settling here, Edwards, who holds an MBA and undergraduate degree in civil engineering from the University of San Francisco, worked for the California Department of Transportation, which he says helped shape his perspective on real estate.

“We began buying land west of Spokane because there wasn’t any competition to buy it,” Edwards says of he and his silent investors.

They formed limited liability companies with names such as Jolt Development and Big Cigar.

Jolt was started for the sole purpose of acquiring 125 acres several years ago. They decided on the name Jolt because they bought the land from the Spokane-based electric cooperative Inland Power & Light Co., Edwards says with a laugh.

Last year, the investors sold the land to Spokane developer Harlan Douglass for close to $12 million for development of a 1.4-million-square-foot industrial complex to be named Douglass Commerce Park, at 5400 S. Thomas Mallen Road, just east of Amazon’s fulfillment center.

Thompson, who is 76, is a commercial real estate broker for Berkshire Hathaway HomeServices First Look Real Estate, at 421 N. Mullan, in Spokane Valley.

Despite the fact Edwards and Thompson are both approaching 80, neither one of them show any signs of slowing down.

“A lot of guys play golf,” Edwards says. “But I don’t know how to play golf.”

Edwards’ and Thompson’s names are synonymous among business circles on the West Plains.

While the pair is credited largely with the development that is now taking place at a dizzying pace west of Spokane, Thompson says Edwards had a vision of the West Plains that few, if anyone else, actually had.

“Dick has spent innumerable hours bringing his vision to the West Plains; I’ve just been riding the train with him,” Thompson says.

He credits Edwards with having the foresight to work with both the cities of Airway Heights and Spokane to bring infrastructure to vast tracts of land before development occurred.

“The growth on the West Plains is exactly what Dick had envisioned when he arrived here,” Thompson claims. “If you’re in government or business on the West Plains, then you owe a debt of gratitude to Dick Edwards.”

From the sale of the land now occupied by Petro Stopping Center, at 10506 W. Aero Road, to Caterpillar Inc.’s Spokane Distribution Center, at 9610 W. Hallett Road, to the 125 acres sold last year to Douglass, there’s a high probability Edwards and Thompson played a key role in helping to execute development of those properties.

Kevin Edwards says, “Dick and Pete spent so much time, energy, and effort promoting the West Plains because they believed being close to an airport would translate into growth. (They) have probably been a part of about 75% to 80% of the largest transactions that have occurred out there.”

Kevin Edwards says he understands why his father and Thompson continue to do business. He says commercial real estate can be addictive.

“(Developer and Spokane sports team owner) Bobby Brett told me that once you start drinking the Kool-Aid, it’s over, and it’s so true.” Kevin Edwards says. “It’s like hunting to them.”

While there may be an element of that present, those who’ve known Edwards the longest say there’s more to him than the thrill of the hunt.

Thompson says he and Dick Edwards still own half of a 16-acre parcel of land on the West Plains they acquired in 1989 for $1.2 million.

“Dick is patient ... he’s still just waiting for the right opportunity for both buyer and seller,” he says.

Tom Tilford, who is 76, graduated from Gonzaga University with Thompson before meeting Dick Edwards in 1976. Not long after they met, Tilford became a silent investor in many Edwards-led projects.

“He conducts his business in the same fashion he conducts his life,” Tilford says. “I think he’s sacrificed a lot of opportunities for more profit because he always looks to make the deal that’s fair to both sides.”