Researcher's breakthrough explained biochemistry behind the shift to slumber 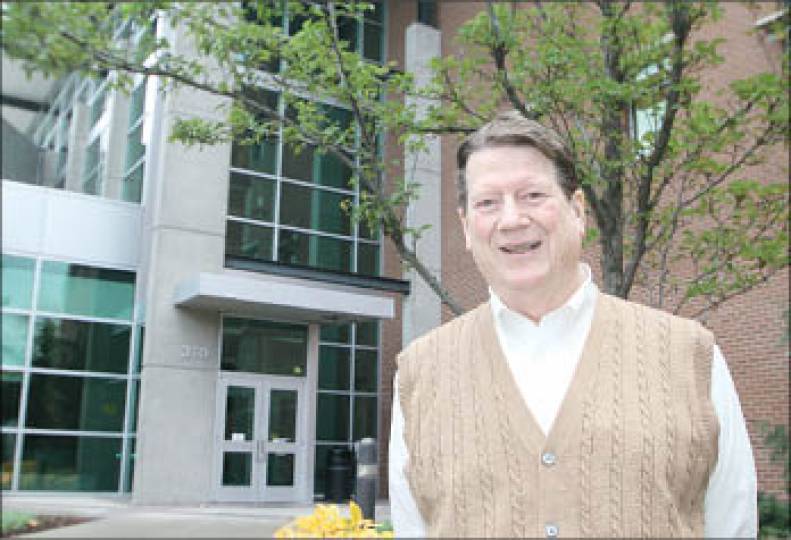 -—Staff photo by Treva Lind
Washington State University professor and neuroscientist Jim Krueger says the interaction between sleep and infectious disease is one of his focuses.

While doctors often suggest plenty of sleep alongside medicine when people get sick, little scientific evidence exists for the reasons why a rest remedy tends to speed recovery.

Jim Krueger, a Washington State University professor and neuroscientist based in Spokane, is delving deeper into understanding the science behind slumber. With the WSU Sleep and Performance Research Center and the WWAMI medical education program, he focuses on the biochemical triggers in the brain that allow sleep to happen—and how it relates to illness recovery.

Krueger recently was elected to be one of 184 members of the Washington State Academy of Sciences, a scientific organization available to advise the governor and legislators on science policy in the state. While four other WSU scientists also are on the board, he is the only Spokane member.

His research centers on the biochemical regulation of sleep, the interaction between sleep and infectious disease, and how the brain is organized to produce sleep. Two years ago, he discovered the biochemical mechanism through which the brain switches from a wakeful state to a sleeping state.

Discover Magazine cited the finding as one of the 100 top stories of 2010 because of the impacts it can have on drugs for treating insomnia and other sleep disorders. The Institute of Medicine of the National Academies estimates that sleep disorders affect between 50 million and 70 million Americans.

Krueger, who was the lead author on the sleep mechanism research, says scientists have long known that brain activity is linked to sleep. The discovery at WSU, however, identified a specific mechanism, or a cascade of chemical transmitters and proteins. It opens the door to more detailed understanding of the sleep process.

Specifically, Krueger and colleagues discovered the key role of a molecule called ATP, the fundamental energy currency of cells, which is released by active brain cells while people are awake to start the molecular events leading to sleep.

The repeated firing of neurons, or nerve cells, in the brain during waking hours causes them to release small amounts of ATP between cells, Krueger says. The ATP binds to receptors responsible for cell processing and the release of cytokines, which are small signaling proteins involved in sleep regulation, as well as many other functions. Krueger says two important released cytokines involved in sleep regulation are called tumor necrosis factor (TNF) and interleukin-1.

By documenting a link between ATP and those substances, the research found a way in which the brain keeps track of activity and ultimately switches from a wakeful state to a sleeping state.

"If you add up all these small events, the brain can keep track of how long you've been awake," Krueger says. Further study is needed, however, to get a more detailed understanding of the process, he adds. "It's difficult because there are a lot of different types of the ATP receptors, at least 15 to 20 of them."

The finding supports the notion that sleep doesn't involve the whole brain, a view held by Krueger and other scientists, but rather just parts of the brain most active during the day. Other parts of the brain can remain relatively alert even after sleep commences.

In researching the link between sleep and infectious diseases, Krueger says the questions center on why people feel the need to sleep more than usual in early phases of an infection, and the biochemical network in play when that happens.

While people for centuries have recognized feeling sleepy and fatigued when they are sick, he says it wasn't until around 1988 that scientists first tried to measure that relationship.

"Every one of those diseases has increases in circulating tumor necrosis factor," Krueger says. "In rheumatoid arthritis and insomnia, we know if you reduce the levels of TNF, you reverse the sleepiness, and the feelings of sleepiness and fatigue go away. There's strong evidence of that in animals."

He adds, "We think sleep helps us recover from inflammatory disease. Grandma always told us to get rest and recuperate. Even our doctor will tell us to rest and relax if we're sick. There's little scientific evidence why that is."

"The bottom line is during the initial phases of the infection, chances are you're going to sleep more," he says. "What's driving the sleep response? What internal molecules are turning on?"

Krueger adds that the complexities of the brain biochemical network as these changes occur will take years to understand. His work into sleep research, he says, already has spanned 38 years.

"With cytokines, there are a lot of them," he says. "Those molecules are not only involved in immune response but also involved in regulating sleep, learning and memory, appetite, lots of things. The complexity, I can't pretend to say we know it all."

However, unlocking the patterns can help scientists and medical professionals better understand and improve medicines to take, or conversely, what pills shouldn't be taken if they block sleepiness and cause a longer recovery time. Krueger's research on sleep and the brain involves mice, including the link between their sleep and recovery from infection.

He says other colleagues at the WSU Sleep and Performance Research Center are pursuing different kinds of sleep research involving people and tracking their sleeping patterns, such as law enforcement officers and how that relates to work performance.

Several years ago, in a previous study, Krueger says he and another researcher studied a comparison of rabbits and how much they slept, or didn't, while dealing with infection.

He adds, "Maybe it's the underlying molecules, and sleep is just a factor. Sleep is very difficult to isolate because so many things change in the body when you're sleeping." Body temperature, heart rate, and kidney function are among some of those changes.

Krueger says, "We're going to be stuck with this conundrum for some time. Grandma is probably correct that we need to sleep more when we're sick, but we can do correlating studies on why that is, and we are."

He also says that most researchers believe sleep is related to what is called brain plasticity, which is the ability of the brain to adapt and rearrange itself.

"Your brain changes constantly," Krueger says. "The brain you go to bed with is different than the brain you wake up with. Large amounts of molecules change over the course of 24 hours. When you sleep, a large number of neuron connections change. They also change while you are awake."

He adds, "As scientists, we think sleep is involved in regulating just how fast and much the neuron connections change. When you're awake and learning, you don't want to have a brain that's not adaptive. We think sleep is playing a critical role in that. It's a way of bringing your brain back to an equilibrium where you can adapt to daily learning, and respond to environmental challenges."

Krueger joined WSU in 1997. He previously was a faculty member at the University of Tennessee, and before that, an instructor at Harvard Medical School. He holds a doctorate in physiology from the University of Pennsylvania. He currently is located in the WSU Health Sciences Building on the Riverpoint Campus but is scheduled to move into the new WSU Biomedical and Health Sciences Building now under construction there.