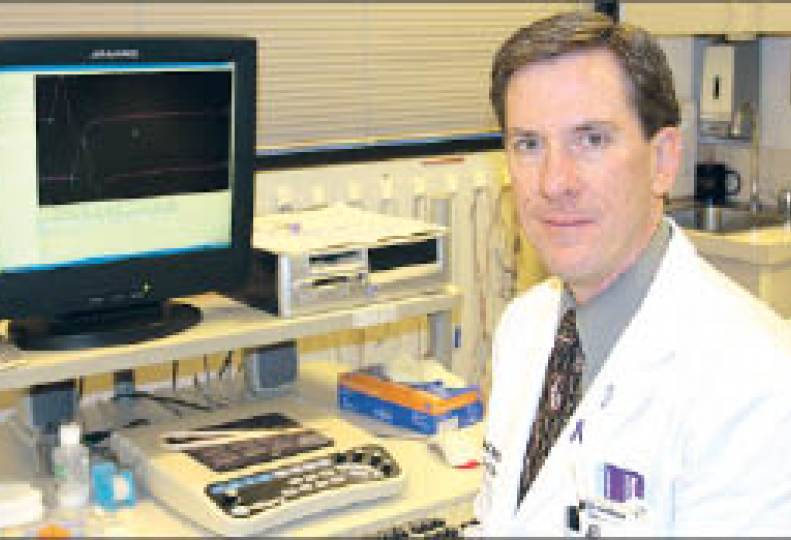 -—Photo by Chey Scott
Neurologist Dr. Scott Carlson says the lab at Rockwood Clinic was the 13th in the U.S. to receive the national credential. Now, he says, 30 medical centers have the accreditation.

stic laboratory, which performs up to 1,200 tests annually to diagnose a range of chronic and treatable health conditions, says it earlier this year became the first facility of its kind here to receive a recently developed accreditation.

At the time, lab director Scott Carlson says, it was the 13th lab in the U.S. to receive the accreditation from the American Association of Neuromuscular and Electrodiagnostic Medicine.

The lab is located inside Rockwood's neurology center at 400 E. Fifth, and Carlson, a neurologist, says that the tests performed there diagnose a range of both neurological and muscular diseases. Such diseases can cause symptoms such as numbness, weakness, muscle cramping, or pain.

Neurological diseases that can be identified using the electrodiagnostic equipment include carpal tunnel syndrome; multiple sclerosis; and polyneuropathy, a nerve dysfunction that often afflicts people with diabetes; among many others, Carlson says.

A disorder that affects both the muscular and nervous system and that he says the tests can identify is Lou Gehrig's disease, also referred to as ALS, which stands for amyotrophic lateral sclerosis.

Tests to pinpoint a nervous system disease or disorder, such as carpal tunnel syndrome, are called nerve conduction studies. The diagnostic procedure is administered by attaching an electrode to the affected area of a patient's body, and that electrode then transmits information about the nerve's electrical impulses to a computer, Carlson says.

During that testing procedure, small, nearly painless electric shocks are directed at the site of a nerve, and the computer then measures the nerve's reaction speed and the magnitude of its response, he says.

"The result is going to be a diagnosis, and it will tell the severity of the problem and the type of problem that exists," Carlson says.

To test for a muscular disease using the electrodiagnostic equipment, a procedure referred to as electromyography, he says a small wire electrode is placed directly into the patient's affected muscle tissue. That miniscule wire then transmits the electrical activity of the muscle back to the computer to record its movement, he says.

Testing for either neurological or muscular disorders can take between 15 minutes and 75 minutes, Carlson says, adding that the time it takes to gather the data depends upon the patient's specific symptoms.

Usually, an electrodiagnostic procedure to identify the presence of carpal tunnel syndrome would take the least amount of time, while a patient who might have a more serious muscular or neurological condition that's affecting multiple areas of the body could require more extensive tests.

Carlson says that about half of the patients who come to Rockwood's main electrodiagnostic lab have been referred there by primary care physicians. Those patients then would be treated by their primary doctor based on the test results collected and analyzed by Carlson or one of the clinic's other six specialist doctors.

The other half of the lab's patients come there because they're been referred by their primary doctor but might then receive treatments from Carlson or one of the clinic's other neurology center providers, who all specialize in that area of medicine, he says.

Carlson says the American Association of Neuromuscular & Electrodiagnostic Medicine only within the last year or so began offering accreditation of electrodiagnostic testing facilities, and Rockwood applied not long after that endorsement became available.

"The (accrediting association) just decided it was valuable, and they recognized there is a lot of variability in this area of testing," Carlson says.

He says recent findings published in the peer-reviewed journal Muscle & Nerve show that in a majority of instances in which a patient receives an electrodiagnostic test, the results are inconclusive or not medically useful. In general, the published study points out, electrodiagnostic tests sometimes are administered needlessly.

Those findings point to the importance of the new accreditation standards offered by the association, Carlson says, because of that probability for a wide range in quality of electrodiagnostic tests among different providers and clinics. A varying quality of electrodiagnostic test results can affect the subsequent diagnosis and recommended treatment a patient then would receive based on his or her test results, he says.

"A patient might say, 'I have pain in my wrist,' and so the physician sends the patient to do nerve studies, and the doctor who performed those studies didn't find anything, whereas another lab that might have had more training might find something," Carlson says.

He adds that, in other instances, electrodiagnostic test results can come back and it's unclear as to what the patient's condition is.

Carlson refers again back to the example of carpal tunnel syndrome. It involves pressure on the median nerve, a main nerve in the wrist, and that pressure can lead to numbness, tingling, weakness, or muscle damage in the hand and fingers.

"We see patients who have surgery and never get better because they might have never had a pinched nerve, and it's really tendonitis or arthritis," he says. "This test proves that there is a pinched nerve and shows how bad it is, and tells us if they are a good candidate for surgery."

Because many people acquire carpal tunnel from prolonged, work-related typing activities, Carlson says that in some cases that the Washington state Department of Labor & Industries will cover the condition's treatment costs.

Such treatment usually involves surgery. Carlson says, though, that he believes the new electrodiagnostic lab accreditation standards could factor into L&I's coverage of those claims, and that patients who are seeking surgery to treat carpal tunnel eventually might be required by the state to be tested for the condition only at an accredited facility.

Rockwood has one other electrodiagnostic testing facility that the clinic uses as an auxiliary, he says, but he adds that Rockwood didn't apply for accreditation of that facility because it's not used as much as the main lab.

Carlson says that he is one of about 10 physicians in the Spokane area who perform electrodiagnostic tests, and there are a total of eight such labs here.