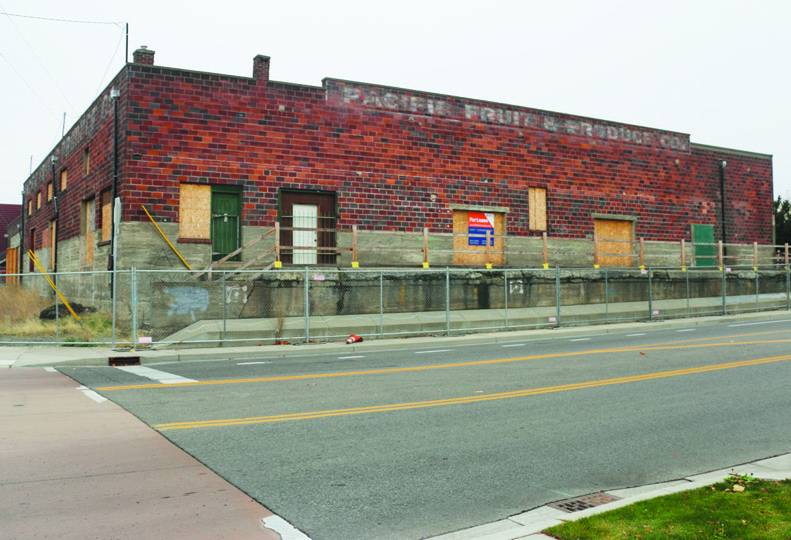 -—LeAnn Bjerken
The old Pacific Fruit & Produce building in Spokane’s University District is expected to be redeveloped into mixed-use space.

Predevelopment plans on file with the City of Spokane show a $500,000 renovation is in store for the former Pacific Fruit & Produce warehouse building at 102 E. Main.

The project also includes the addition of off-street parking on the north side of the site, as well as a new sidewalk, a bike lane, and a landscape buffer.

Spokane-based HDG Architecture is designing the project, for which plans show construction is scheduled to begin next March.

The Journal reported in June of 2016 that the building was planned to be converted into a restaurant and entertainment venue as part of a larger development plan by Seattle-based Jensen Byrd Development LLC, which is headed by Dean Allen, CEO of McKinstry Spokane LLC, and Wally Trace, of Seattle-based Trace Real Estate Services.

The company had been selected by Washington State University to redevelop the historic Jensen-Byrd building and surrounding properties on the WSU Spokane campus east of downtown.

At that time, McKinstry spokeswoman Kim Pearman-Gillman had told the Journal that Jensen Byrd Development planned to begin construction in 2017 on a $45 million, 300,000-square-foot, mixed-use development.

However, in June of last year, Washington State University halted ground-lease negotiations with Jensen Byrd Development in order to develop a new master plan for the WSU Spokane campus.

Pearman-Gillman couldn’t be reached immediately for comment on the current project, but city records list the building as being owned by Jensen Byrd Project LLC.

Lars Gilberts, U District CEO, confirmed that the original plan for the building was part of the larger development plan McKinstry had created with Washington State University.

“I do know that building is no longer part of that previous plan,” he says. “However, I’m sure the owner or developer is cognizant of what’s happening in the area and has a plan in mind that will meet current needs as well as adapt with future use.”

Current projects underway in the area include the $15.4 million University District Gateway Bridge, which will serve as a link between the U District, the East Central neighborhood, and the lower South Hill medical district.

Near the south landing of the bridge, Avista Development is constructing the $50 million, four-story Catalyst building that will be occupied in part by Eastern Washington University.

Gilberts says he can’t comment further on the plans for the former produce warehouse, but he says the pace of development work in the U District will pick up in 2019.

“We’re in the process of updating our strategic master plan,” he says. “This time around we’re looking at ways to continue developing the district in relation to the areas around it.”

Gilberts says the City of Spokane also is updating its development plans for downtown and the southern portion of the U District.

“Our goal with this new master plan is to promote innovation and connectivity to other districts, while still respecting existing ownerships and uses,” says Gilberts. “This plan will help both the city and private developers to better understand what’s possible and what’s supported and allow for developments that offer opportunities for everyone.”