Approaching 80, Brockett still has his mind on law 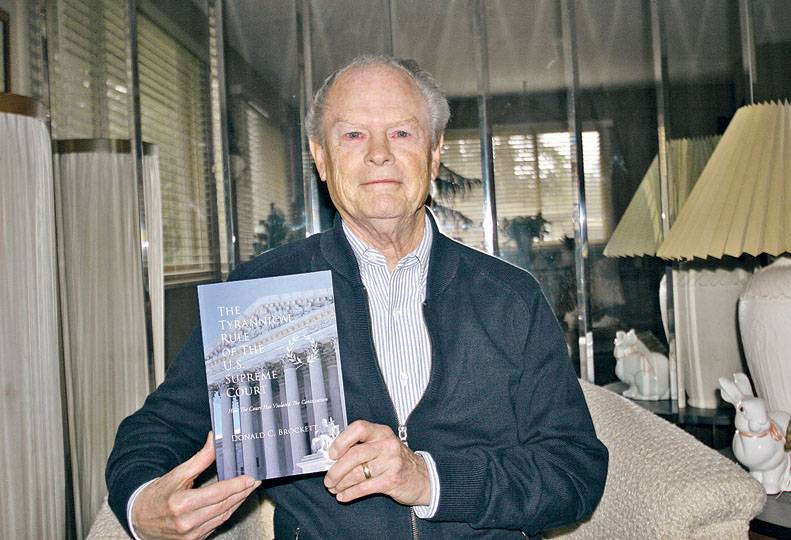 Donald C. Brockett spent 33 years working in the Spokane County Prosecutor’s Office, 25 of those as the office’s lead attorney. He’s argued cases at nearly every judicial level, including before the U.S. Supreme Court in the mid-1970s.

Now, Brockett is trying to make his case as a self-published author. What he’s doing is analogous to retired professional athletes moving to sports broadcast and commentary fields, although he acknowledges some readers may find his observations of the nation’s highest court in his first book to be overly harsh.

Last year, through a company he’s formed call Critical Books Publications LLC, he self-published a book titled, “The Tyrannical Rule of the U.S. Supreme Court—How the Court Has Violated the Constitution.”

Brockett founded the limited liability company in August and established www.criticalbookspublications.com to sell the book, which was released in December at $18.50. As a self-publisher, Brockett is responsible for the $3.95-per-copy printing cost. It costs him $10 per month to maintain the website. To date, he has sold seven copies of the book.

He is considering focusing his next book project on criminal law, while possibly touching on his years as a prosecutor.

Brockett’s overarching premise in his recently released book is that the U.S. Supreme Court has made rulings that improperly reflect court members’ political leanings and have altered the balance of power in the country.

Early in the book, Brockett writes, “We have replaced a rule by the kings and queens of England with a rule by the Supreme Court. When the Court decides what the clauses mean in the Constitution, that meaning can change with the whims of a particular group then sitting on the Court and certainly can change most dramatically when the members of the Court change.”

Brockett goes on to ask rhetorically in the book, “How has this one branch of the federal government, meant to be the least powerful, made some of the most important decisions on how you should lead your life?”

In an interview at his northwest Spokane home, Brockett said, “I’ve always been kind of an avid writer, especially as it related to preparing cases. Today I’m just concerned about the public’s general lack of understanding of civics. I want people to think. Think about government. Government is not supposed to work for us; it’s supposed to leave us alone. All I want to do is raise questions.”

Brockett was born in Chicago in 1936. His family moved to Southern California, and then to Spokane in 1947. Brockett says his parents saw pictures of Spokane, and combined with health issues he was experiencing at the time, believed a climate with four seasons would be beneficial for him.

He graduated from Lewis & Clark High School in 1954, took pre-law courses at Gonzaga University, and graduated from the law school there in 1961. That same year, he began working as a deputy prosecutor in the prosecutor’s office and married his wife, Jean. The couple have four living children, 10 grandchildren and 13 great-grandchildren. A daughter, Lisa, was killed in a plane crash in 1987.

Brockett was appointed the county’s top prosecutor in 1969, elected to the office the following year, and then re-elected five times. His office won thousands of felony convictions in a quarter century, including of serial rapist Kevin Coe, still arguably viewed as the city’s most recognized criminal.

It was a fulfilling career, but Brockett, even though he turns 80 this year, acknowledges that he still struggles with the daily routine of retirement.

“When we’re working, we think we can’t wait until it ends,” he says. “But if your life is your work and then the work ends, well … you need to do some thinking. The truth is, I invested my life in my work. As an attorney, as prosecutor, I was a problem solver.”

“One of my sons says, ‘Dad, relax, you’ve done enough,’ ’’ Brockett says. “But the relaxing part is not that easy to come by.”

Brockett says he thought he was retiring from law practice when he chose not to run for a seventh term as Spokane County prosecutor in 1994. He developed colon cancer not long after retiring, but he beat the cancer after nine months of chemotherapy, and it has never returned.

However, two years went by after retiring and Brockett found himself gradually moving back into the courtroom. Initially, he was helping other attorneys prepare cases, but he soon went into private practice, which lasted for the next seven years. Altogether, he spent more than five decades practicing law.

In a March 1997 story in The Spokesman-Review, Brockett was quoted as saying, “I was getting bored, sitting around reading books. There’s only so many days you can play golf.”

During his career, Brockett tried cases in Spokane County Superior and District Court, as well as U.S. District Court He was also appointed special U.S. Assistant Attorney in the prosecution of the leader of a biker gang in Spokane, also prosecuting him for the murder of a police officer. Brockett prosecuted three death penalty cases and handled all appeals in the Washington State Court of Appeals’ Spokane-based Division III and before the Washington State Supreme Court.

He also argued cases at the federal Ninth Circuit Court of Appeals and one at the nation’s highest court. Before the U.S. Supreme Court, he argued and won a case defending the Spokane County treasurer in a civil rights lawsuit.

After the 1981 conviction of Kevin Coe, known as the “South Hill rapist,” Coe’s mother, Ruth Coe, tried to hire a hit man to kill Brockett and then Superior Court Judge George Shields. Police said Ruth Coe agreed to pay an undercover officer $4,000 to carry out the killings.

Kevin Coe was convicted of four counts of first-degree rape after a three-year string of more than 30 assaults panicked the community. Ruth Coe, who was in her early 60s at the time, was prosecuted and sentenced to jail for 90 days.

Despite a long, high-profile legal career, the office in Brockett’s home offers little evidence of it. On one wall there hangs a framed certificate acknowledging his appearance before the U.S. Supreme Court. If there are any remnants of his 25 years as the county’s top prosecutor, they’re tucked away from view.

What Brockett displays, however, is a continued passion for the law and a concern about how it’s being applied.

“The Supreme Court wasn’t meant to be a political entity,” Brockett says adamantly. “It shouldn’t be a liberal court. It shouldn’t be a conservative court. It’s supposed to be body of nine, qualified decision makers who can effectively interpret the law.”

Brockett says attempting to market his first book has been challenging. He’s listed it on Amazon, and has been in conversations with other electronic publishing companies and with Costco Wholesale Corp. So far there haven’t been any bites, he says.

In the meantime, Brockett says he will continue to do what he enjoys most, spending time with his family while staying current on the law.