Dynamic could hamper lending demand, though 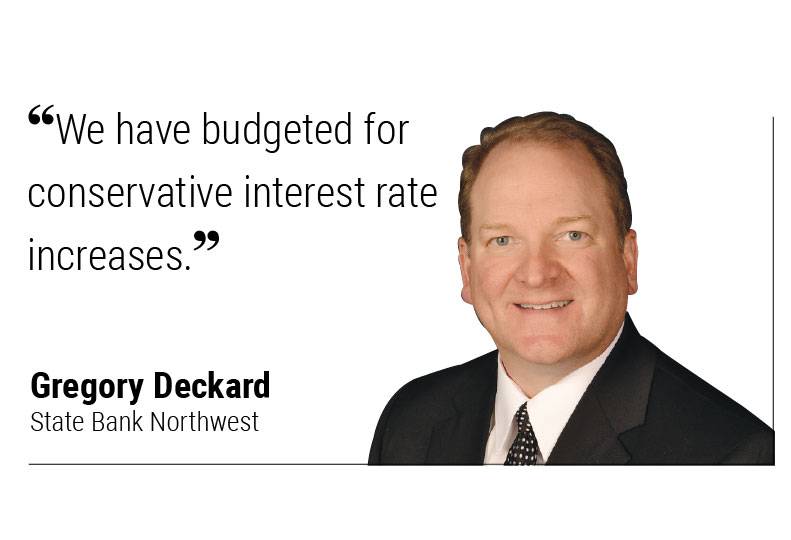 Anticipated federal funds interest rate hikes are expected to foster an environment of growth and diversified investment among banks.

“It’s a little overdue, given that it’s taken one tool out of the federal reserve’s toolbox, in terms of what to do with rates. There’s only one direction for them to go,” Deckard says. “We have budgeted for conservative interest rate increases.”

On March 16, the Federal Reserve announced a quarter-point hike in the federal funds rate, the interest rate at which banks trade funds with each other.

Deckard says at the end of 2021, most signs pointed to three interest rate hikes anticipated this year. Since then, some forecasters have predicted the Fed will raise rates up to seven times this year.

“In the short term, with our overnight cash yields, the bank will see an immediate increase in our net interest margin,” he says. “The industry as a whole, my bank included, is just flush with cash, sitting there and earning near zero rates. Any increase in the interest rate is going to bring in more interest revenue to the bank. Loans that are adjustable will increase over time.”

“How much it will increase will depend on a combination of factors, including—but not limited to—how quickly the Federal Reserve raises rates, loan demand, and deposit growth,” Scranton says.

Loan revenue at Washington Trust has been trending upward, he says.

“2020 was clearly helped from the surge in loan volume due to the Paycheck Protection Program, but 2021 ended with revenue from loans up 2.5% compared to 2020,” Scranton says. “That is solid growth given the fact that 2020 was distorted by the PPP loan volume and 2021 saw most of the PPP loans paid off.”

As loan rates and bank revenues rise, deposit ex–penses also rise, though at a slower rate. Scranton says he’s not concerned about deposits.

“Nobody’s be–ing very aggressive in raising rates dramatically on the deposit side, because they have plenty of deposits already,” Scranton says.

Deckard is concerned the Fed may raise interest rates too much or too quickly.

“The Fed has put themselves in a precarious position in trying to control inflation, and rising interest rates is one of the tools, but it’s how fast and how much they’re going to raise rates that creates uncertainty and creates some concern on my part for what the overall impact to the economy is going to be—especially on housing affordability, small businesses, and farmers.”

At Washington Trust, Scranton says the bank’s home loan center will be the first part of the bank to feel rate increases.

“People may start dropping out of the market because they believe that they cannot afford the payments at a higher mortgage rate,” Scranton says. “We would see our revenue from our mortgage production in a rising rate environment start to level off and not rise as much, because the volume of loans starts to drop off.”

Scranton also is concerned about the impacts of rate increases on the bank’s wealth management division.

Deckard believes banks will be more likely to diversify as rates increase.

“As the short-term rates rise, yields on things like municipal bonds and mortgage-backed securities will rise, so banks will become more active in purchasing securities,” Deckard says. “I think you’ll see banks moving from cash into more of a securities portfolio, with that extra liquidity. Sitting on this liquidity, seeing the loan demand that’s out there, and having cash available to purchase investments, with interest rates rising, we’re in a position to restructure the balance sheet.”

“Your loan payment really doesn’t change a huge amount if you go from a 3 1/2% mortgage rate to a 5% mortgage rate, so we’re spending a lot more time trying to help educate those clients,” Scranton contends. “(Borrowers) should not panic and assume that they cannot buy a house now without finding out how much their payment will change.”

Scranton says people have become used to the low interest rate environment of recent years, so increased rates may come as a shock to some.

“For the last 15 years, since the financial crisis … interest rates have been falling or been stable at a low level, and you get used to doing things a certain way in that environment,” Scranton says. “We’re trying to educate and work with our customers so they know what a rising rate environment could look like and make sure they plan for that.”

Scranton says Washington Trust has been trying to help clients find alternative mortgage options, such as the 10/1 adjustable-rate mortgage option, in which a rate is locked for 10 years, after which time the rate adjusts annually.

“The main thing we’ve been trying to emphasize ... is that now’s not the time to be taking on a bunch of debt and hoping that interest rates will go back down so you can have a chance to pay that debt off cheaper,” Scranton says.