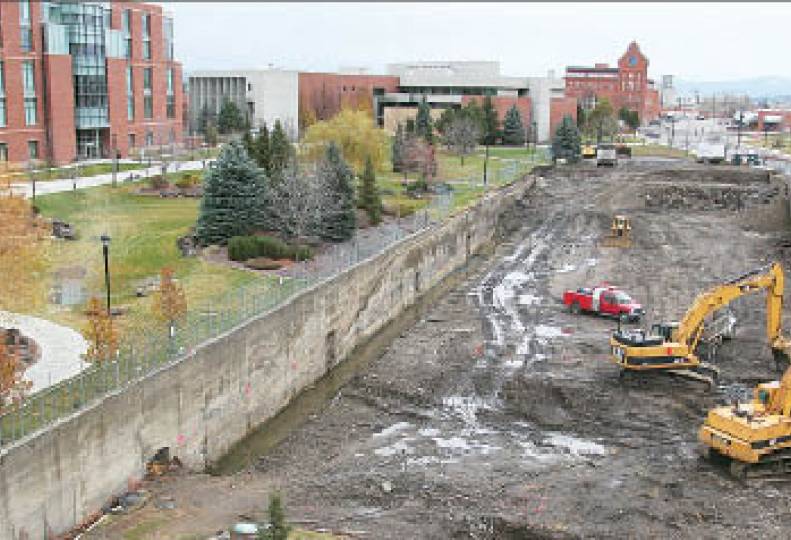 -—Staff photo by Treva Lind
Excavation work makes way for foundation work at the site for the new Washington State University Biomedical and Health Sciences Building, on the Riverpoint Campus. Crews are expected to work there through the winter.

Graham Construction & Management Inc., of Spokane, expects to start work this month on a $715,000 contract to build the footings and foundation of the Washington State University Biomedical and Health Sciences Building on the Riverpoint Campus.

Bob Askins, a vice president at Graham, the general contractor and construction manager on the project, says excavation work at the site started around Labor Day and the site now is ready for concrete pouring to begin. Crews are expected to work on the footings and foundation through the winter.

Askins says Graham also expects to seek structural steel fabrication subcontractor bids this month for a portion of the project that's expected to start next spring and to cost about $1.8 million.

"We expect to be erecting steel by March or April," Askins says. "We'll put a tower crane up before Christmas."

The state Legislature approved $35 million for the first half of the building's funding. The construction cost for erecting the core and shell of the building is about $32 million, Askins says.

Red Diamond Construction Inc., of Spokane Valley, is the subcontractor that recently completed excavation work at the building site, located on the north side of Spokane Falls Boulevard, just east of the Intercollegiate College of Nursing.

Askins says the excavation work involved cleanup of contaminated ash that was moved to the site during the construction of the nearby Sirti building in the late 1990s and put into what was a former railroad underpass trench. The ash came from an old municipal incinerator, Askins adds.

Workers unearthed some unusual finds, including "a lot of pharmacy bottles that had been manufactured in Spokane."

He says the bottles are planned to be used in a display at the new building once it's completed, since the facility will house a proposed new medical school, as well as WSU's College of Pharmacy, which will move to the new building from the university's Pullman campus.