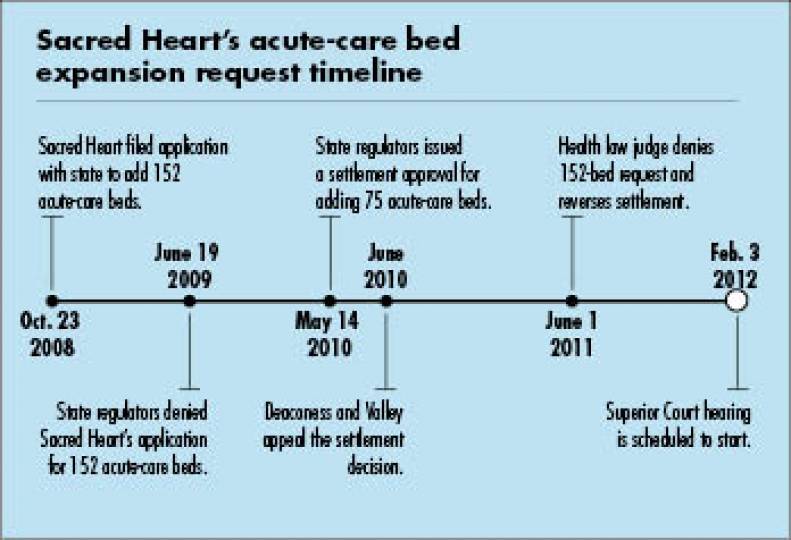 A hearing is scheduled for Feb. 3 in Spokane County Superior Court on a Sacred Heart appeal of a Washington state administrative law judge's rulings issued against the hospital this past summer. The judge denied the hospital's request to add 152 acute-care beds and also reversed a state regulative settlement that would have allowed at least 75 new beds.

Sacred Heart originally submitted a certificate of need application to the state for the 152-bed expansion on Oct. 23, 2008.

In June 2010, competitors Deaconess Hospital and Valley Hospital appealed a settlement reached between Washington state regulators and Sacred Heart to add 75 adult acute-care beds, if 25 beds were transferred from Providence Holy Family Hospital. Deaconess and Valley Hospital accused Sacred Heart and state officials of holding secret meetings that led to an agreement and asserted that the settlement disregarded the state's own methodology for determining how many acute-care beds a community needs.

Following a cross-appeal in which Sacred Heart reasserted its overall proposal to add up to 152 beds, the issues were debated during an adjudicative hearing earlier this year before John Kuntz, a state Department of Health law judge.

In June, Sacred Heart filed in Spokane County Superior Court a petition for judicial review of Kuntz's decision, asserting that it has had to turn away patients from certain care units because rooms are full.

The hospital also contended in the petition that the issues raised by Deaconess and Valley in their appeals were "meritless," and asserted that the Department of Health's decision through its adjudicative service unit was outside its statutory authority and unsupported by substantial evidence. The filing also said the ruling failed to decide all issues needing resolution.

The hospital asked the court to reinstate the 75-bed settlement, and approve a certificate allowing up to 77 additional beds to bring the total to 152 new beds.

"Sacred Heart, the leading tertiary hospital in Eastern Washington, is full," the petition asserted. "All of its licensed beds are set up and available. Most of Sacred Heart's care units were at times closed to new patients during the six months prior to the application."

The hospital's petition added that, "Sacred Heart must often divert patients to hospitals in Seattle or Portland because no Eastern Washington hospital provides the needed specialized service."

"Nothing's changed," Robb says. "We're anticipating the hearing date briefings that are expected to be filed end of year and the hearing in February. We'll continue to be in the process and moving forward."

In Kuntz's June 1 decision, he said Sacred Heart didn't prove by a preponderance of the evidence that its application met the certificate of need criteria, and that the department in its settlement action didn't use an accurate bed count methodology. He further said that Holy Family wasn't a party to the proceedings and shouldn't be required to transfer beds.