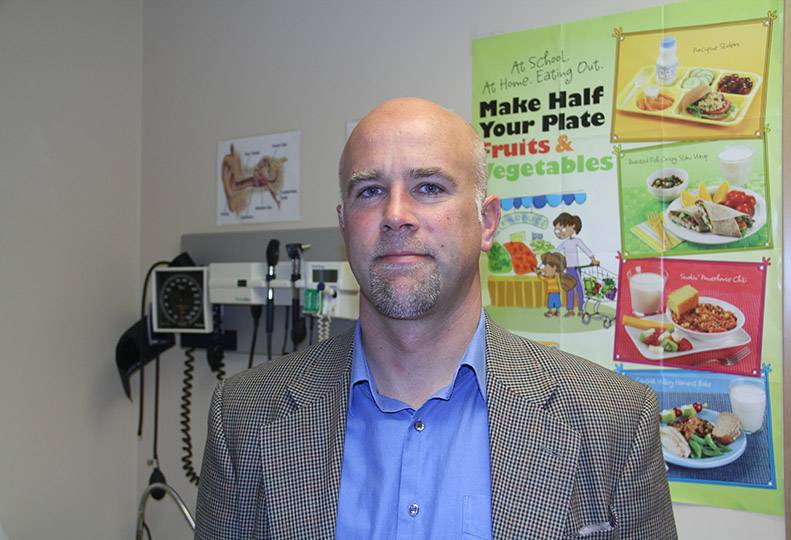 Sunset Health Center, a school-based pilot program in Airway Heights aimed at providing onsite health care to children, is touted to be the first of its type in Spokane County, but the organization that arranged initial funding for it hopes there will be many more.

CHAS Chief Operating Officer Aaron Wilson says that since opening, the Sunset health center has seen 200 individual patients and has logged about 400 total visits. All of those patients are enrolled in the Cheney School District or are siblings of a student, Wilson says.

The health center currently employs a physician's assistant and medical assistant, who both work part time during school hours, and a licensed clinical social worker who works one day a week, Wilson says. The social worker offers counseling services to students. He says of the patients it sees, about 12 percent are for behavioral health issues.

The health center has been performing well since it opened, but the biggest hurdle it faces in the future is securing funding, Wilson says.

"The issue for these centers is they don't make money," he says.

The health center has an operating budget for the 2012-2013 school year of $67,500. A majority of that—$61,500—comes from private grants, while the rest is provided through patient fees, says John Browne, CHAS' director of operations.

"We would love to be able to expand. The challenge is securing capital funding," Wilson says.

Situated behind the elementary school at 12824 W. 12th in Airway Heights, the health center operates out of half of one of three classroom modules next to the playground. The 900-square-foot space has a waiting area, three exam rooms, a back office space, and bathroom.

The clinic has capabilities to run tests on blood and urine and contracts with Pathology Associates Medical Laboratories, a lab based here owned by Providence Health & Services and Catholic Health Initiatives.

The health center, which opened last April, operates during the school year and is closed during breaks.

"We're a resource primarily for this school, but also Cheney School District at large," Wilson says, adding that the clinic also treats siblings of students at Sunset and receives referrals from other schools within the district. It recently extended its hours on Thursdays to 4 p.m. from 2 p.m. to enable students from other schools to visit.

School-based health centers in Washington state mostly are located in the Seattle area, with the Walla Walla-based Lincoln Health Center being the only one besides Sunset east of the Cascade Mountains, Brown says.

Wilson says some families have made the health center their primary care provider, but that poses a problem when the school closes during summer and spring breaks. He says one option it's looking at to address the problem is transferring patients to other CHAS locations during the summer, such as the clinic on Maple Street. Sunset Health Center uses the same electronic record system as CHAS clinics, meaning all records are available at the other clinics.

One of the key benefits of the health center is that it "starts students from a young age to expect to get health care," says Stephen Brown, vice president of the School Health Care Association of Spokane County. Having a school-based health center can get children in the habit of seeing a physician regularly, particularly when distance or time is an issue for parents, he says.

Brown says the association is eyeing creating other school-based health centers in Spokane County, but it's currently gathering data that it plans to use to seek grants to fund the program in the future. Brown says it doesn't have a specific number of school-based health centers it would like to set up, but the idea is to pair them with schools with the highest needs in the county.

"We're definitely looking hard at Rogers (High School) as the next location," Brown says, adding "I don't think we envision one in every school."

For Brown and Wilson, although the health center concept is beneficial, one of the biggest struggles it's facing is funding.

Brown says Seattle, which is no stranger to the school-based health center, funds its endeavor through a city levy it just renewed for seven years. It has funded the health centers since the early 1990s and now has health centers in 10 public high schools and four middle schools.

Brown says the association will continue to weigh other funding sources, including a city or county levy, as well as state funding if the program receives enough support.

"We don't see another one being created until we get some sort of sustainable funding," Brown says.

It looked at data such as free and reduced lunch rates, health care options near the schools, obesity rates, and mental health needs to narrow down which districts would benefit the most. The association narrowed its selection down to seven schools, and held focus groups with parents and teachers.

Brown says Sunset was chosen as the pilot location because prior to Rockwood Airway Heights Clinic opening a facility there at 10414 W. U.S. Highway 2 in Airway Heights, it was nine miles from the nearest health center, and had a 75 percent free and reduced lunch rate.

"They may have the health insurance now, but they may not be able to take time off work," Brown says.

Having a health center on the same campus as a school enables students to go to a doctor's appointment, without necessarily having parents miss work.

"The idea is if it's co-located at the school, it's easier to get the kids there," Wilson says, adding the health center sees patients on a sliding fee for service, even if they don't have insurance.

Brown says the health care laws also will require coverage for mental health, adding that about one in five children have a mental health or behavioral problem.

"I think that's one of the big benefits that are often overlooked," Brown says adding there might be an increased chance students will seek out a counselor with school-based health centers on grounds.

Of the role of the school nurse, which many schools employ, Wilson says the health center can supplement the nurse's role.

Brown says nurses can act like an in-house referral system, with the nurse being the first point of contact for students typically.

"People may assume a school nurse is enough," Brown says, adding that school nurses still are limited in what they may be able to do onsite.

The School Health Care Association of Spokane County was formerly an advisory committee of Communities in Schools of Spokane County, another nonprofit here that focuses on providing children in the county support to stay in school. Mike Wiser, who currently works with CHAS as a public policy and development coordinator, is a board member for the association, and led the organization after it spun off from Communities in Schools in 2010.