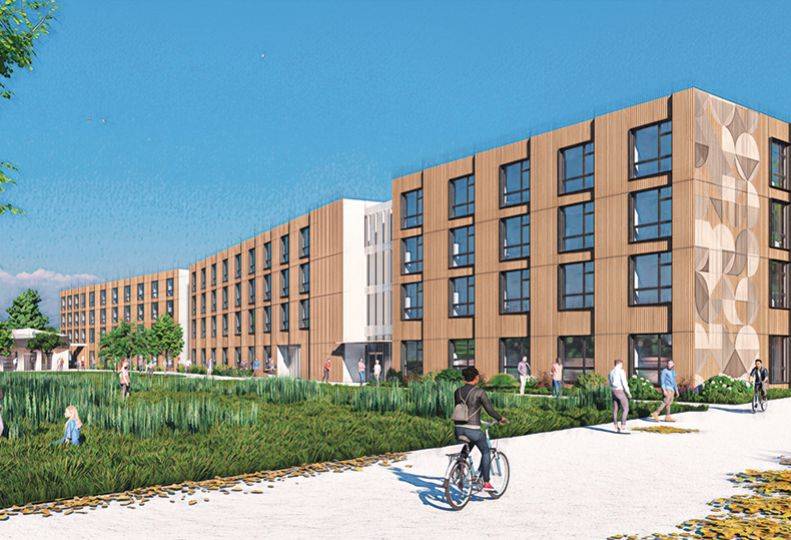 -—Mithun Inc.
Construction of this $25 million apartment complex could start next spring, with an anticipated summer 2024 completion.

The development has an estimated construction value of $25 million, which could change as the project nears construction, he adds.

“The fact that it’s within an opportunity zone as well as a tax-exemption zone really made the economics more viable in that location,” McKinstry says.

A contractor likely will be selected next month, says McKinstry, who isn’t affiliated with mechanical contractor McKinstry Co.

“We’ve been looking for almost a decade for the right opportunity in Spokane,” he says. “We’ve done a lot of workforce housing for the missing middle—health care workers, civil servants, teachers. We’ve also done a lot of student housing and felt Iron Bridge is an opportunity for us to bring our Spectrum brand of housing to students and other young professionals in the market.”

The apartments will be a mix of open studios, and one-, two-, and three-bedroom units, and the site will have vehicle and bicycle parking. A basketball half-court, fitness center, and a clubhouse also are planned as property amenities.

A preliminary site plan shows the total square footage of the building will be about 102,500, with about 25,000 square feet on each floor.

McKinstry says, “We found there’s a lot of great synergy with health care partners in terms of their need for workforce housing.”

Construction is expected to begin next spring and be completed in summer 2024.

McKinstry says the project is in alignment with Spectrum’s goal to bring affordable housing to the Spokane area.

“We hope this is the start of a lot of things we can do in Spokane to have a long-term presence and make long-term partnerships there.”

Whipple Consulting Engineers Inc., of Spokane Valley, has filed a pre-development conference application for the 9,200-square-foot apartment project, which has an estimated construction cost of $3 million.

Rebecca and Kenton Cox, of Spokane, bought the land in 2005 for $140,000, according to Spokane County Assessor’s records.

In the Garden Springs area, a new three-story, 32-unit apartment building is planned at 1520 S. Rustle, according to city of Spokane building permit information.

Trek Architecture, of Spokane, is designing the 9,000-square-foot apartment building, and Spokane Valley-based T.W. Clark Construction LLC is the contractor. The Spokane office of DCI Engineers is providing engineering services.