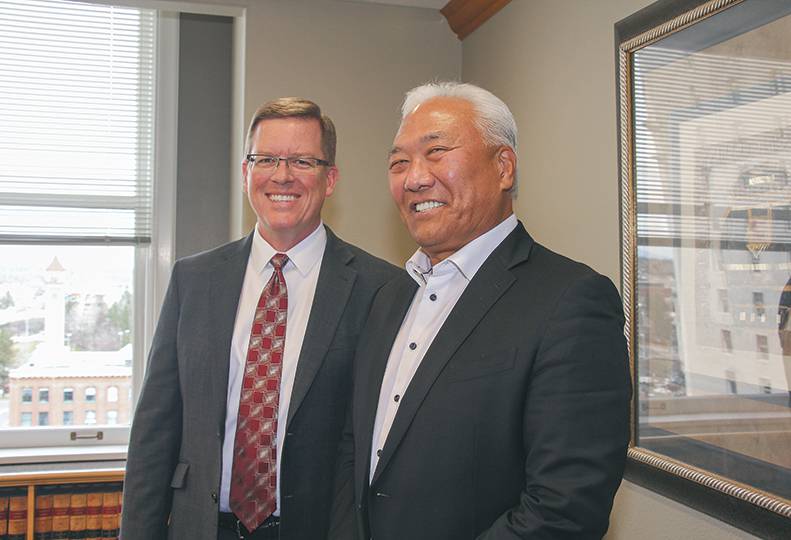 -Erica Bullock
George Ahrend, left, and Mark Kamitomo are joining Luvera Law Firm, as the West Side firm expands into the Spokane market.

The term “of counsel” can have different meanings depending on the law firm, and Gellatly says that Ahrend and Kamitomo are employees of Luvera.

Representatives of Luvera, an assumed name for Beninger & Gellatly PS, say advantages of the Spokane expansion include greater resources and experienced attorneys who can go up against powerful and well-funded companies, government entities, or individuals.

Luvera Law Firm was founded in 1993 by attorney Paul Luvera and his wife, Lita Barnett-Luvera, who was the firm’s managing partner. The Luveras retired from the practice in 2014.

The expansion brings the total number of lawyers at Luvera Law Firm to 10. A support staff of 12 additional employees also works for the firm.

Kamitomo and Ahrend are the only attorneys in Luvera’s Spokane office and work with one staff member there. The office occupies about 2,500 square feet on the 10th floor of the Paulsen Building, at 421 W. Riverside, where the Markam Group’s offices are currently located while the practice draws to a close.

The Luvera law office specializes in catastrophic personal injury claims, and Gellatly says it has helped litigate millions of dollars in settlements and jury awards for plaintiffs.

Kamitomo says, “There are several cases in Spokane that we’re working on right now, and having the combined resources of additional lawyers really makes a difference. We’re representing the estate of a really well-known oral surgeon right now. .... We also have a catastrophic injury case in the northern part of the state where a gentleman lost both of his legs as a result of an auto versus pedestrian accident.”

Both are complex cases, he says, “So, it’s nice to have more lawyers to shoulder that burden.”

Gellatly says Luvera handles most of its cases on its own but has aligned with other law firms, including the Markam Group and Ahrend Law Firm, in past matters.

“We’re pretty selective with the lawyers we consult or associate with,” he says.

Both Kamitomo and Ahrend’s former practices will close after ongoing litigation at the firms wrap up.

Kamitomo says, “There are a few cases left out of the state of Washington and I’m going to wrap those up as the Markam Group.”

Ahrend adds that he’s going through a similar process of concluding the ongoing legal matters at Ahrend Law Firm.

Gellatly says personal injury law is an important area of practice because it’s a way for companies to be held accountable for their actions and for injured people to get justice.

Luvera Law Firm is representing the family of Alan Justad, a former city of Seattle planning official who was killed in the 2019 tower crane collapse in Seattle’s South Lake Union. A jury in King County has rendered a $150 million verdict last week against three tower crane companies for the collapse that killed four people and injured three, according to a Luvera press release.

The jury found Omega Morgan Sarens LLC, of Hillsboro, Oregon, and Northwest Tower Crane Service Inc., of Des Moines, Washington, primarily responsible for failing to take basic precautions to keep structural pins in place and monitor wind conditions, which reached speeds of over 45 mph at the time of the accident.

The third company Morrow Equipment Co., of Salem, Oregon, was assigned 25% of damages by the jury, with 30% to Omega Morgan, and 45% to Northwest Tower Crane, according to a report from the Puget Sound Business Journal.

Kamitomo says the work the law firm provides has brought about the implementation of important policy changes as well as monetary recovery for its clients.

Gellatly says, Luvera represented a Spokane family in a suit against Alaska Airlines last year. A jury ruled in favor of the family and ordered the airline to pay over $3 million for the wrongful death of a 75-year-old woman. As a result of the case, the airline announced it has changed its communications policies to increase passenger safety and help prevent a similar situation from happening again, he says.

Kamitomo adds, “One of the things we can’t do, of course, is give somebody back their life. If they’ve lost their life or if somebody’s been brain damaged or lost a limb, you can’t give that back. But monetary recovery, which is really the only thing we can do, can make a difference.”