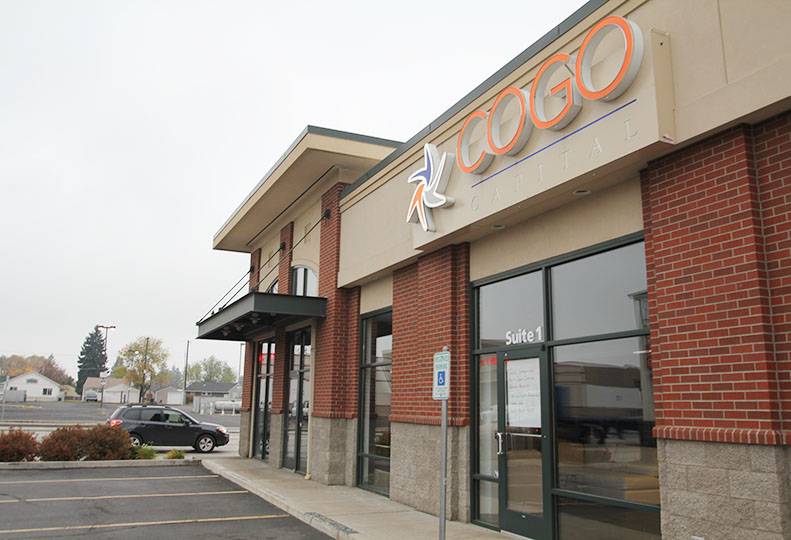 -—Mike McLean
A sign on the door of the former Cogo Capital office, on Spokane’s North Side, says the space is used for training, but company CEO Lee Arnold says the branch closed due to lack of traction.

The Washington state Department of Financial Institutions has issued a notice of violation against Secured Investment Corp., the Coeur d’Alene-based parent company of a private-money lender that had been doing business here as Cogo Capital Spokane LLC.

While Secured Investment says it has made changes in its lender-borrower referral program and is in compliance, the state says the issue has yet to be resolved. Barring some sort of settlement, Secured Investments is on notice that the state intends to issue a cease-and-desist order against the program.

The notice is a statement of charges and of intent to issue an order for Secured Investment to stop offering unregistered business opportunities in Washington state, says Suzanne Sarason, chief enforcement officer for DFI’s Securities Division. The program in dispute charges participants a fee to join a lender-borrower referral program, Sarason says.

As of last week, a hand-printed sign posted on the locked door of Cogo Capital’s former Spokane office said the space has been converted to a training facility and lists a toll-free number for loan inquiries.

“Cogo Capital isn’t getting the interest or traction we had hoped from the Spokane market,” says Arnold, who is based in Coeur d’Alene. “It didn’t make sense to have it in Spokane, when we essentially were closing the same deals across the country internally here.”

“At this time, Cogo Capital doesn’t have operations in Spokane, although we’re still interested in lending money to anybody in Spokane looking to buy, fix, and sell real estate,” he says. “Now we’re just based out of one location in Coeur d’Alene.”

Regarding the DFI notice, Sarason says the securities division contends Secured Investment has violated the state’s Business Opportunity Fraud Act by offering business opportunities in Washington without registering with the state and filing required disclosure information.

For a fee of $997, Secured Investment offered people the opportunity to earn money by referring prospective borrowers and lenders to its private-money loan business, Sarason says.

“These changes have been implemented, and the affiliate program is in full compliance,” Bjornson says.

Sarason says as of last week, Secured Investment hadn’t registered a business opportunity under that name or under the name of Private Money Exchange.

“The registration would be about what they will do in the future,” Sarason says. “There would still have to be some resolution for what happened in the past.”

DFI says Secured Investment has collected nearly $22,000 from Washington state residents who have bought into the referral program.

Private Money Exchange continues to do business in Washington, Powell says, adding, however, “The program has been modified so it doesn’t fit the definition of business opportunity, so no registration is required.”

Secured Investment canceled weekly real estate webinars two years ago, and some purchasers have yet to receive any of the promised promotional materials or business cards, DFI alleges.

The state agency also alleges Arnold has claimed that the average deal pays participants in the referral program $1,500, although Secured Investment failed to provide purchasers with documentation to back up that claim.

DFI also says, “Lee Arnold guarantees purchasers that if they do not double their initial payment of $997 within 12 months, then Secured Investment Corp. will write the purchaser a check for $1,994.”

The guarantee, however, fails to disclose how Secured Investment would finance refunds, the agency says.

Secured Investment also fails to disclose the percentage of purchasers who make money off the referral program, DFI says.

Sarason says business opportunity sellers also are required to disclose litigation history, and Lee Arnold has failed to disclose his.

Litigation involving Arnold includes a 2009 civil suit in Utah in which he was named as a defendant in a complaint alleging misappropriation of funds, the notice states, adding that the parties settled the case out of court in 2012.

“Both Lee Arnold and Secured Investment Corp have failed to disclose to purchasers this past litigation and would have been required to list it in a business opportunity disclosure document,” DFI says.

Arnold claims the Utah suit was filed by investors who lost value in their investments due to the nationwide dive in the real estate market during the recession. He says the parties settled when he deeded properties over to the plaintiffs.

Arnold says the DFI’s issue with Secured Investment has to do with the product and pricing more than the company.

He contends the Business Opportunity Fraud Act applies only to opportunities with a buy-in cost of $300 or more. The lender-borrower referral program represents less than $100 of the total Private Money Exchange buy-in, making it exempt from the act, he asserts.

Arnold says DFI issued the notice of charges “without calling us about the reality.” He adds, “It could have been cleared with a simple phone call. We never had any impression that Washington state didn’t like or didn’t deem it appropriate.”

Sarason says Secured Investment has requested a hearing to present its defense and also has waived its right to have the hearing within 90 days of receiving the notice.

“Since we’re thinking about working out a settlement, we didn’t want to set a hearing right away,” she says.

That doesn’t mean that Secured Investment can continue offering unregistered business opportunities in the meantime, because DFI already has determined that the program violates the Business Opportunity Fraud Act, she says.

Secured Investment opened its first retail branch under the Cogo Capital brand here in 2012, followed by branches in Coeur d’Alene and Southern California.

Earlier this year, the Spokane branch manager told the Journal three people were employed in the office and Cogo Capital expected to hire three more people here this year.

At that time, Cogo Capital’s training office was at Secured Investment’s headquarters building at 1121 E. Mullan in Coeur d’Alene.

As of last week, Secured Investment, had an A rating with the Spokane-based Better Business Bureau of Eastern Washington, North Idaho & Montana on a scale ranging from A-plus to F.

The BBB website lists four complaints lodged against the company in the last three years, and Secured Investment has presented offers of resolution for all of them, the nonprofit says.