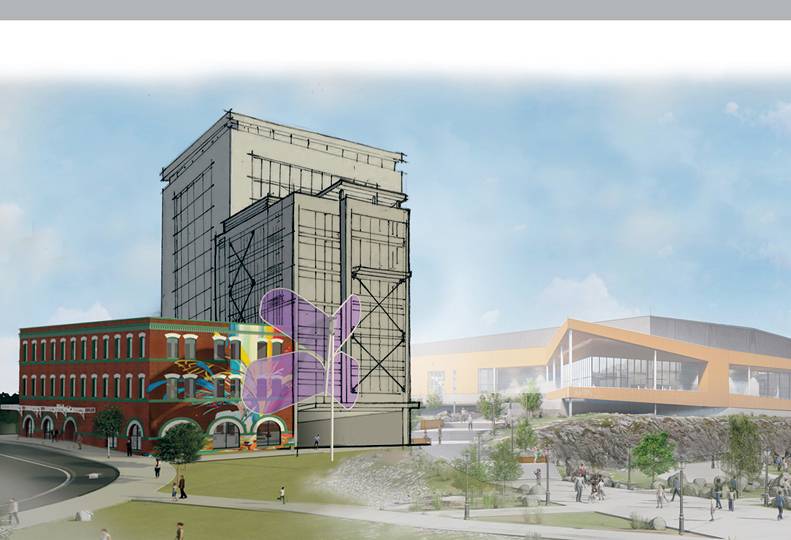 -—Bernardo|Wills Architects PC
Selkirk Development LLC hopes to attract $30 million in investment to get its Papillon project off the ground.

Spokane-based development company Selkirk Development LLC has set its sights on a new, two-tower project that founder and CEO Sheldon Jackson hopes will set a new standard for development in Spokane.

“We don’t want to overbuild the market,” he says.

In total, the project is estimated to have nearly 500,000 square feet of space. Jackson says the estimated construction cost could reach $80 million, depending on the final plan.

The north tower will be the larger of the two towers, with seven floors totaling 178,500 square feet sitting atop a five-story, 468-stall parking garage. The tower could have an additional 50,400 square feet if Selkirk adds two more floors.

The buildings are planned to be a mix of office, residential, retail, and restaurant space.

Alex Ekins, partner at Selkirk, adds that the company is designing the project with the future in mind, so the parking levels will be built flat, rather than inclined.

“As time progresses and perhaps the level of individual parking, individual car ownership demand lessens … those floors from the top down can be converted into actual functional space,” he says.

The timeline is contingent, however, on meeting capital raising goals.

Plans show the south tower will have six stories totaling 36,000 square feet and is planned to be connected to the existing building at 908 N. Howard, known locally as the Ram Building, that was renamed the Papillon earlier this year.

The first floor will be open and have a public walkway connecting the Riverfront Park Promenade to the planned Cataldo Alley. Ekins says the west end of Cataldo Avenue, which was vacated recently, will be converted into a public market and events space that will run between the north tower and the future Sportsplex.

It will be landscaped, he adds, in an effort to create symmetry between the park and the development.

The project is ideally located, Ekins notes, with the planned Sportsplex immediately east, the renovated promenade, the planned kids Discovery Park, and center court for Hoopfest currently underway to the south, and the Spokane Arena to the west.

Once built, tenants will have an unobstructed 360-degree view of Spokane, he adds.

The company plans on eliminating any visual barriers between the Sportsplex project and the Papillon Towers through landscaping and development to convert the area between the buildings into usable public space, Jackson says.

“Without looking at the buildings themselves, I think the most important part of this project is the connectivity, so our goal is to blur the line between public and private,” he adds.

Jackson says the development company also has decided to put a large venue and event space on the roof of the North Tower. The floor will be enclosed in glass to allow for full view of downtown Spokane and the park, he says. It will be landscaped with lots of vegetation, he adds.

The company already has begun working with a catering and venue company that is planned to operate the event space.

“We’re probably more excited about that roof than anything so far,” he adds with a laugh.

Bellevue-based Swinerton Inc. and Spokane-based Yost Gallagher Construction LLC are the contractors on the project. Bernardo|Wills Architects PC, also of Spokane, is designing it.

Selkirk purchased the half-acre property in June for $1.24 million.

They add the project wouldn’t be possible without cooperation from Canopy Credit Union, which is located east of the planned north tower. A portion of the tower will be located on Canopy’s property, Jackson says.

Ekins adds that originally the project was going to be staged, but the designation of downtown Spokane as an opportunity zone—where the parcel is located—opens the possibility that the project can be done all at once.

Opportunity Zones are designated census tracts, typically in low-income neighborhoods, where investors can earn federal tax breaks by investing capital gains into real estate and other business property. Those investments are made through special funds, called qualified Opportunity Funds, and are meant to spur economic growth.

Such zones were established as part of the federal 2017 Tax Cuts and Jobs Act.

Selkirk, in partnership with HC Global, has established a Papillon investment fund. The company is looking to raise $30 million from investors seeking to reinvest earnings from capital gains. It has already reached 10% of its goal, Jackson adds.

Capital gains are profits made from the sale of a bond, stock, real estate, or other assets. Opportunity zone programs let investors roll capital gains over from other investments and allow investors to avoid capital gains taxes for 10 years.

Jackson adds that because of the interest from conventional investors in the project, the company has decided to split the fund to allow for that type of investment in addition to the opportunity zone fund.

Selkirk has hired a Denver-based legal team to help with the fund, he adds, as well as Seattle-based accounting firm Moss Adams, which has a Spokane office, to manage the fund and investments.

Jackson asserts the company already has begun receiving inquiries from companies about leasing space in the towers. He also has discussed leasing space with six food and beverage vendors for the first floor of the south tower in the open walkway public area as well, he says.

Selkirk has renamed the former Ram building Papillon, which is the French word for butterfly, in honor of the recently refurbished Expo ‘74 Butterfly.

The company also has hired local artist Ben Joyce to paint the mural on the side of the building facing the promenade that integrates its history with the Spokane River and the butterflies, he adds.

“We saw the writing on the wall of how retail was going to slowly diminish, and urbanism was taking over. We embrace that; we never embrace sprawl,” he says.

It shifted to urban mixed-use projects around 2007, Ekins adds.

Since that shift, the company has redeveloped the Dormitory, at 1516 W. Riverside; the West Downtown Midcentury, at 1526 W. Riverside; the former Bloomsday Building, at 1610 W. Riverside, in which Selkirk is headquartered; SoDo Offices, at 309 W. Second; Fresh Soul, at 3029 E. Fifth; and the ongoing Browne’s Addition Mixed-use project under construction at 1614 W. Riverside.

The Browne’s Addition project will feature an upscale restaurant on the main floor, Ekins says, for which a tenant has already been secured. The rest of the space will be residential and office. That project is set to be completed in summer 2020.