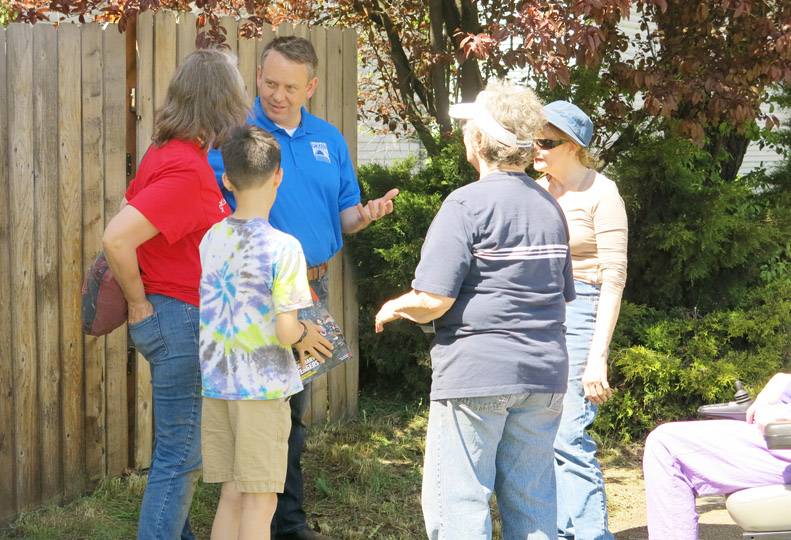 The Spokane Gives campaign has expanded in scope during its first three years.

“We’re starting to get more businesses involved,” Condon says. “We definitely have opportunities to grow in the area of business to participate. It’s building, and that’s fun to see.”

Spokane Gives occurs during the month of April and consists of a series of community-service projects and events designed to promote volunteerism. It coincides with National Service Month, Condon says, and also helps to prepare the city for its events season—the Bloomsday race and the Spokane Lilac Festival in May, Hoopfest in June, and others.

The effort started as a weeklong series of events, but last year, organizers expanded to occur throughout the month. In February, Condon received the national Local Leadership Award from the Washington, D.C.-based Voices For National Service, primarily for his work on Spokane Gives.

According to data from the Spokane County United Way, about 17,200 volunteers participated in 380 projects during the Spokane Gives effort last April, resulting in about 91,500 donated hours. The volunteers included people from 67 community organizations, 34 businesses, and five universities and colleges, United Way data show.

Lisa Curtis, director of communications for the Spokane County United Way, says the organization estimates the total value of the volunteered hours at just under $2.2 million. That’s calculated assuming the average value of an hour volunteered is $23.56, Curtis says. In other words, nonprofits would expect to pay that hourly amount for all of the services received through Spokane Gives projects, she says. Using the same, industry-accepted formula, the calculated value of volunteered time this year will be $25 per hour, she says.

While a number of projects are handled during Spokane Gives, a large, neighborhood-specific cleanup project occurs each year. Initially, Clean Up The Core events concentrated on parts of downtown Spokane. Last year, the effort focused on the east Sprague Avenue neighborhood, east of the core. This year, the Clean Up The Corridor project will involve a stretch of north Monroe Street, north of that arterial’s intersection with Northwest Boulevard.

Around the same time the city launched Spokane Gives, it partnered with the United Way organization here to develop a website, VolunteerSpokane.org, in an effort to connect nonprofits with volunteers year-round.

Condon says, “When people would ask me about volunteering, I didn’t have a place to point them except to an individual charity, but sometimes, that didn’t match with what was important to them.”

Through the website, Curtis says, volunteers can create a profile and indicate what types of causes they’re interested in supporting and what type of volunteering they’d like to do. They also can specify neighborhoods or parts of town in which they want to work. Nonprofits list skills and services they’re seeking from volunteers, either for a specific project or on an ongoing basis.

“It’s for all of those extras, where members of the community can pick it up so a nonprofit doesn’t have to spend the money or time and can focus on their mission,” Curtis says.

Currently, she says, more than 300 nonprofits are using VolunteerSpokane.org, and about 5,000 individuals have created profiles.

A minigrant program also has been established through which nonprofits can apply for up to $500 for a specific project. Past grants range from $97 for a garden beautification project at St. Margaret’s Shelter to $500 for World Relief Spokane to make refugee welcome baskets.

Traci McGlathery, community relations manager for STCU, says the Liberty Lake-based credit union has donated $5,000 to the minigrant program since its inception.

McGlathery says STCU has been involved in the cleanup projects each year. So far, participation by the organization’s employees and their families has been better than anticipated.

“The first year, we thought we’d get 50 volunteers, and we had 200 volunteers,” McGlathery says. “This was one of the first events where we had invited team members and their families to volunteer, and it was wildly popular.”

She says the timing of the start of Spokane Gives coincided serendipitously with STCU’s launch of its internal Volunteer Counts program, through which the credit union commits up to $25,000 to its employees’ volunteer efforts. Each employee receives eight hours a year of paid time off to volunteer, as well as a $50 grant for a nonprofit in which that employee is involved and has spent at least 20 hours volunteering. The balance of the funds remaining in the Volunteers Count program goes toward grants to nonprofits, for which employees can apply.

Condon says he first developed the idea for Spokane Gives after attending a U.S. Conference of Mayors, where he learned of a program started by Louisville, Ky., Mayor Greg Fischer called the Mayor’s Give A Day. He and representatives from Empire Health Foundation, United Way, and Whitworth University visited Louisville to witness the event and returned home to plan a similar, weeklong event for Spokane.

The city and its partners decided to expand Spokane Gives from a week to a month because of the strong volunteer response.

Condon says the city has made a goal to put 1 percent of its budget toward social services, and it’s close to doing so.

He adds that there has been some discussion about whether a city government should have a significant role in nonprofit work.

“Really, it’s a philosophical debate about whether the city should be doing this,” Condon says. “I believe we should, and the City Council has agreed with that the last couple of years. It’s a great leverage point for our taxpayers’ dollars.”