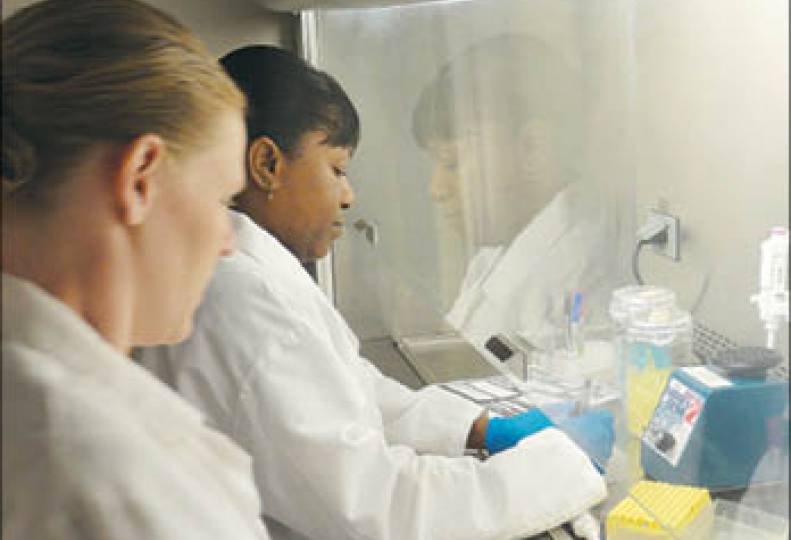 Research being conducted at Washington State University in Pullman could have important implications for the planned medical school here when a branch of the university's Paul G. Allen School of Global Animal Health starts operating in Spokane, experts say.

The School of Global Animal Health, which is a department of the WSU College of Veterinary Medicine, based in Pullman, focuses on controlling diseases specifically transmitted between animals and humans. Guy Palmer, director for the School of Global Animal Health, says there's overlap in research conducted at the school and the issue of public health.

Although both Palmer and Ken Roberts, the head of medical sciences at WSU, acknowledge the likelihood of a research hub moving here from Pullman, neither can say when the School of Global Animal Health will actually carve out a place at the WSU Spokane campus.

Palmer says he expects the WSU Spokane campus will continue to grow during the next five years, albeit slowly over the next year or two, but that the campus here should expand dramatically after that. He says the School of Global Animal Health will see noticeable growth as well.

The school currently has 30 faculty members. Palmer says current plans are to expand the school's faculty to 75 during the next 10 years. That number doesn't include any faculty that would be hired on to staff the expected global animal health initiative at the Spokane campus.

The Spokane health sciences campus "will be the prime determinant of how we see that growth occur," Palmer says.

Roberts says WSU Spokane medical program's work with the School of Global Animal Health is still in its infancy.

"We're collaborating with the School of Global Animal Health to work in infectious disease for the medical program in Spokane," Roberts says.

He adds one step WSU has taken at the Spokane campus is seeking to recruit an educator who specializes in infectious diseases. That position is one of three medical positions the WSU Spokane medical program is looking to fill here.

Palmer says that with the growth of the WSU Spokane campus, there are some opportunities to develop expertise in the public health area here to augment a strong global health initiative already in place on the West Side.

Palmer says as Spokane carves out its own medical niche, he hopes to see more work in public health in the Inland Northwest between the WSU medical program and the animal health program.

"I think there will be a nice natural nexus there," Palmer says.

Antibiotic resistance research is a forward-thinking topic for Roberts, who says people in general aren't concerned with the possibility of bacterial infections. He says physicians on the other hand are generally more aware of the issue of antibiotic resistance and see it as a growing concern.

"These things have a way of sneaking up on you," Roberts says.

The Pullman campus is already conducting research in this area, Palmer says, adding that antibiotic resistance, or antimicrobial resistance, has potentially serious implications for patients who land in the hospital and use commonly administered antibiotics and antivirals.

The World Health Organization says 64 countries have reported a form of tuberculosis that is resistant to several drug treatments and a "high percentage" of infections patients get in hospitals are caused by drug-resistant bacteria.

Roberts says the WSU medical program doesn't have a large clinical emphasis in infectious diseases currently, but says he hopes to form a tie with the School of Global Animal Health as that academic area develops in Spokane.

The large-scale implications of a global health research branch located in Spokane are still unclear, he says. The potential findings of that research will likely have an effect on future medical program education.

"As we develop a relationship with them, I'm sure they'll influence our curriculum over time," Roberts says. "There's no proposal for changing the curriculum, but I could see that happening very easily."

Palmer says the School of Global Animal Health was founded five years ago. Of the 40 or so students enrolled in the school, about half are international students.

"We've had that mixture from the beginning, and we kind of consider that an ideal mixture," Palmer says, adding that it's difficult to look at public health on a global level without getting that international perspective. He says the school provides training for its international partners, and in return, its domestic students get a global take on public health.

Palmer says the school monitors disease transmission not only in the Inland Northwest and Washington state, but its connection with other labs and the Centers for Disease Control enable it to look at transmission on a national and global scale.

"We spend a lot of time with those transmitted through food and water," Palmer says. The school has conducted research on ecoli and salmonella, which can be transmitted to humans not only through food, but also through contact with animals.

In addition to food and water-borne diseases, the school focuses on others transmitted to humans from fleas and contact with infected animal tissue. Research is being conducted at the school on diseases such as the plague and Nipah virus, which typically causes brain inflammation and respiratory diseases.

Palmer says the goal for the school is to find a way to prevent those types of diseases within the animal population before they are transmitted.

"Even a disease that may look like it's emerging in Indonesia or Uganda, we know these infections can spread anywhere in the globe," Palmer says.

Palmer says the school has ties to other WSU areas of study in addition to medical and veterinary programs, such as economics and anthropology and the role they play in public health.

"There are a lot of things that drive improved health," he says. "We want to make sure we look at those through all perspectives."