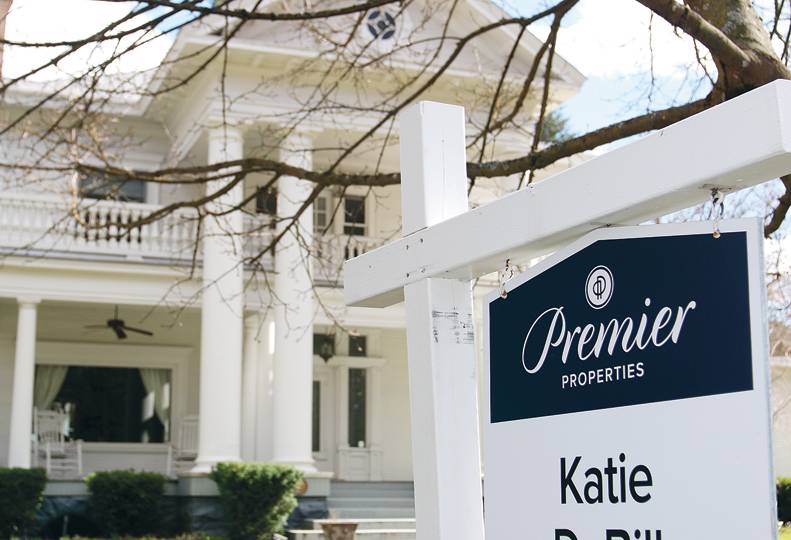 Despite being a strong sellers’ market, Spokane-area sales of single-family homes experienced a double-digit decrease percentagewise in March, according to the market snapshot released by the Spokane Association of Realtors.

Home sales decreased by 24.4%, at 459 for March 2019, compared to 607 in March of 2018, while the median price increased by 12.2% for the month year-over-year to $245,800, a counterintuitive trend that Spokane Association of Realtors Executive Vice President Rob Higgins says is largely driven by a decreasing inventory.

With inventory at the lowest number he’s ever seen, at a 1.9-month supply, Higgins says the few houses on the market are receiving multiple offers, which is driving prices up, while the low level of supply means there are less houses to sell, both contributing factors to the decline in sales.

The Federal Housing Finance Agency ranked Spokane-Spokane Valley as No. 4 in the top 20 metropolitan areas with the highest rates of house price appreciations, with a 13.08% increase for 2018. Coeur d’Alene was ranked No. 5 with a 12.85% increase.

John Leland, designated broker and owner of Spokane-based Re/Max Inland Empire, says the market is hottest for homes priced below $250,000, which typically receive between five and eight offers.

Multiple offers drive up costs as competitive buyers try to outbid one another.

Leland says he had what is known as a chronic nuisance property for which he received 34 offers before closing.

Contributing to the skyrocketing home prices is the continued increase in the cost to construct a new home.

The University of Washington Runstad Center for Real Estate Studies found Spokane County had an affordability index for first-time buyers of 83 in quarter two of 2018, the most recent quarter for which data is available. An index of 100 indicates a balance between the family’s ability to pay and the cost. Higher index numbers mean housing is more affordable.

The last time Spokane County dropped below 90 was in 2014.

Higgins contends increasing the supply of condominiums could be a potential fix for the lack of low-income housing. He argues that reform of land-use regulations and policies that currently discourage condominium construction would help builders who are shying away from building those units as an affordable housing option.

“We’re in a real tight market,” he says. “On a statewide basis, they’re trying to unlock the door to affordability with the condominium reform.”

Spokane has been discovered, he says. “It’s booming (in Seattle), and now it’s spreading this way.”

Tom McArthur, public affairs director for the association, says, “Historically, most people who moved to Spokane did so because they had a reason to move here … now they’re being pushed because they can’t afford housing in Seattle or Portland.”

King County had the lowest score on the housing affordability index for first-time buyers for Q2, at 39.8.

Spokane-area properties saw an 8% increase views per property year-over-year and were on the market a median of 48 days, Realtor.com found.

Higgins contends that the market is going through a paradigm shift, with the average number of years people stay in houses increasing from seven years to 10 years, decreasing the inventory.

This is aided by the increase in the number of careers allowing for telecommuting, so people aren’t required to move for a new job, he says.

Leland says, “The only sellers benefitting are the ones moving out of the area.”

Because of the tight market, sellers are shying away from putting their houses on the market for fear of not being able to find another home in the area, Leland says, applying further pressure on inventory.

This has led Leland’s company to increase the use of what’s known as a sale of property contingency form. This form makes the closing of the new home sale contingent on the sale of the buyer’s existing home, meaning one can’t purchase a new home without selling their old home first.

“If you have a house that’s under $300,000, as long as it’s appropriately priced, then you’ll probably sell in less than a week,” he says. “We have the local demand, the out-of-town demand. It’s the perfect storm of demand and I don’t foresee it tapering off right now.”

Higgins also states that people aren’t retiring as early or are choosing not to downsize upon retirement.

“We’re living longer; we’re healthier,” he says. “All those houses that were coming on before aren’t coming as rapidly as they used to.”

Higgins also attributes the decline in sales to the harsh winter storms that hit in February, theorizing that buyers held off on purchasing homes—which would have closed in March—until the weather warmed up.

However, he notes that theory won’t be confirmed until April numbers are calculated.

Leland agrees with that theory. He says he believes sales will increase as weather warms up and more houses go on the market, and he contends that the Spokane market operates on a set rhythm, with market peaks traditionally occurring in July.

Based on this, he believes that inventory will reach its peak in May this year.

Higgins says he agrees that prices will continue to increase through the year and estimates sales will decline between 3% and 5% by the end of the year compared to 2018, largely driven by the lack of affordable housing.

Kootenai County is seeing a similar trend, with homes sold decreasing 4% through March 2019 compared to the year-earlier period, while the median home price has increased 9%.

Overall, Higgins says the Spokane market has been on a seven-year increase—longer than usual—and he forecasts that sales will level off and then drop.

“We’re in a real tight spot,” he says. “Spokane is going to do nothing but grow … everything looks positive except inventory, which is going to be our 2019 headwind.”