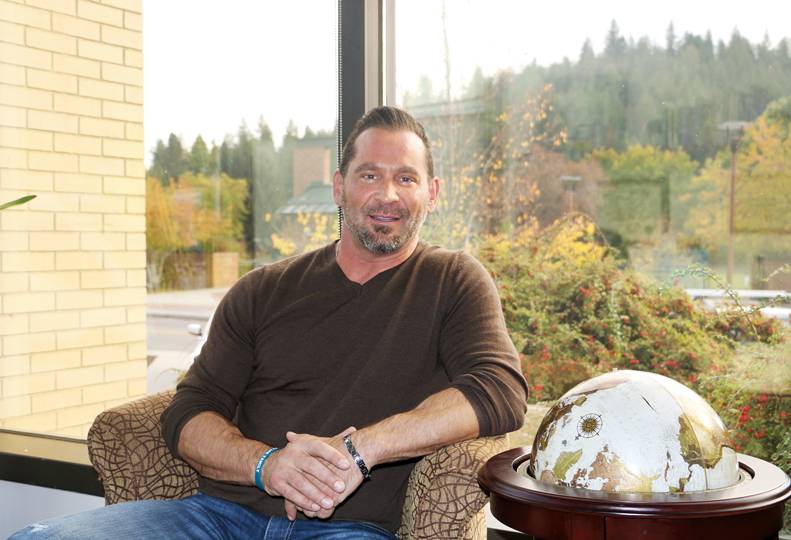 -Kevin Blocker
Sean Ruggiero operates Advanced Market Sales in Coeur d’Alene. He will continue in that role now that the company has been acquired.

Nearly seven years ago, Sean Ruggiero, a Coeur d’Alene-based financial investment adviser, started an annuity and retirement company in large part because of the financial uncertainties he experienced in his childhood.

“I grew up with a single mom in Everett, Washington,” Ruggiero says. “In that time, it was, pay the bills, bounce some checks, and try to keep up on the credit card bill.”

Despite the fact there are more financial resources available to the average American than ever before, Ruggiero says most people still lack financial savvy.

“Growing up, we learn math, geography, history, but when do we learn things like: What’s your credit score? What kind of money do you need to set aside for retirement, and what is retirement anyway?” Ruggiero says. “I learned from a very visceral level that I had to help see my mom through.”

Today, he’s happy about the fact he has since moved his mother to Coeur d’Alene and bought her a house.

The experience helped lay the framework for the founding of sibling businesses at the end of 2003.

Recently, the two companies caught the eye of Dallas-based Integrity Marketing Group LLC, an independent health and life insurance provider. Following discussions with Meaike and Ruggiero, the two agreed to sell their book of business to Integrity in October. All involved parties decline to disclose financial terms of the transaction.

Ruggiero, who turns 45 in November, and Meaike will retain their respective leadership positions while also securing managing partner positions with Integrity.

In a press release announcing the acquisition, Bryan Adams, Integrity’s CEO and co-founder, says the Family First entities were an attractive buy due to their comprehensive approach to retirement planning.

“By partnering with Integrity, our 275,000 agents can scale this approach and provide even more Americans with secure plans for their financial futures,” Adams says in the release.

In the acquisition, Integrity now will handle Family First’s accounting, human resources, and information technology. Advanced Market Sales will have access to Integrity’s lead generation and marketing platforms while also being included in Integrity’s employee-ownership plan.

Ruggiero says the companies don’t sell products directly to consumers, but instead provide support to more than 20,000 agents licensed by their respective states across the U.S.

“When an annuity is sold, then money is set aside, not from the client’s premium, but from the insurance or annuity company’s reserves, and they pay us, and then we pay our agents,” he says.

Agents are paid on a commission basis, Ruggiero says.

Including Ruggiero, Advanced Market Sales has a total of eight employees and is located at 401 E. Front, in Coeur d’Alene. The company occupies a total of 4,000 square feet of office space on three stories of the building, he says.

From Ruggiero’s perspective, Integrity will allow him to continue with his passion of helping to provide underserved families and individuals.

Just the combination of people living longer and the often double-digit annual inflation percentage rate in medical care costs each year has made retirement planning more challenging than ever, he says.

Following graduation from Everett High School 1994, Ruggiero earned a full scholarship to Central Washington University where he played quarterback for the Wildcats. He graduated from CWU with a degree in business in 1998.

Ruggiero says he got interested in startup businesses after college, when he moved to Oakland, California.

“I knew nothing about that, but a group of friends got together, and we started making a few things happen,” he says.

He was a part of team that sold a business to a French-owned firm and another to a subsidiary of Harley-Davidson Inc. Later, he moved back to Seattle and then worked for a Coeur d’Alene company on a one-year contract, he says.

During that first year in Idaho, Ruggiero and his wife, Charissa, experienced the birth of their first child. They now have four children ranging in age from 8 to 16.

“It became hard to leave because of the quality of living,” he says. “It was just nicer here. We used to live in Queen Anne (a Seattle neighborhood); I could throw a rock to the Space Needle. I remember asking my wife one day, ‘Have you seen a kid anywhere around here lately?’’’

After moving to Coeur d’Alene, “We did all things insurance because we didn’t know any better,” he says. “It didn’t take too long for us to figure out that we were making so much more money on life insurance annuities.”

For the first time in his life, he’s found subject matter that has created an undesirable thirst for learning more in order to help more people, he claims.

“I only went to college to play football and I only went to high school for girls. I had zero inspiration to learn,” he says. “But today, my value is learning stuff. I’ve got a resource now to be able to go help people.”