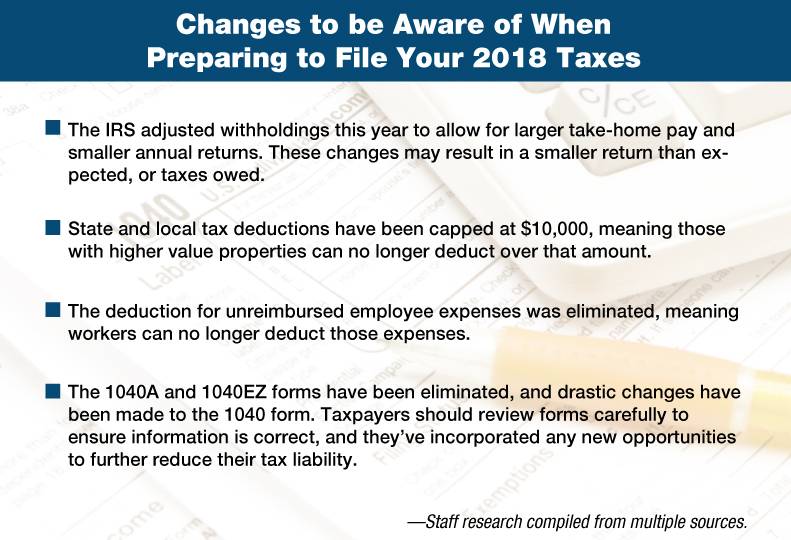 This tax season, the first since the Tax Cuts and Jobs Act went into effect, is raising the learning curve for both taxpayers and tax preparers, Spokane accountants say.

Even so, the effects on most taxpayers’ pocketbooks likely aren’t as negative as first perceived.

“With the recent government shutdown, everyone’s a bit behind this filing season and scrambling to catch up,” says Adam Sweet, accountant with the Spokane office of Eide Bailly LLP. “At the same time, we also have all these new laws in place, and a lot of clients have questions about filing and what to expect.”

One of the biggest issues for early filers this year has involved receiving a smaller tax refund than expected, in some cases, due to the Internal Revenue Service’s changes to withholding tables.

“The biggest thing people mix up is the concept of a refund,” says Sweet. “When the law was changed, there was pressure on the IRS to adjust withholdings to allow people more take-home pay during the year, rather than a big refund later. But a lot of people weren’t accounting for that and ended up surprised.”

Anson Avery, accountant and owner of Anson Avery CPA PLLC, says most of the blame for taxpayer confusion regarding expected refunds falls on the IRS.

“The IRS prematurely reduced the withholding tables and didn’t require people to fill out a new W-4 form. Instead, they decided to just reduce withholdings unilaterally,” he says.

Avery adds, “The problem is that many people are accustomed to using their withholding as a kind of forced savings. They know they’ll spend their paycheck, but if a percentage is withheld each time, they can expect that money as a refund come tax time. Now it’s tax season, their refund is lower, and they want to understand why.”

While some taxpayers are upset about getting a smaller refund or unexpectedly owing money, Sweet points out that most did pay lower taxes overall as a result of the new tax bill.

He encourages clients to compare their total tax liability for 2018 to their total for 2017. The fact their return is smaller doesn’t equate to actually having paid more, he says.

“I’d say the majority of people, about 60 or 70 percent, will find they actually owe less tax this year than last,” he says.

The latest IRS data show the average American tax refund is actually slightly larger than it was at this same point last year.

Those figures are a reversal from data reported in the first three weeks of tax season, which had showed declines of as much as 17 percent compared with last year.

Data, however, also show the number of people receiving refunds is down from 40.5 million to 38.5 million, a decline of almost 5 percent.

“It’s hard to compare this year with last, because the filing season started late due to the shutdown, and last year, we didn’t have any tax reforms to accommodate,” says Sweet. “It’s hard to draw conclusions as not enough returns have been filed yet, but there’s reason to think that there could be an even greater increase in the average refund.”

Though withholding changes were a big source of confusion, Sweet says other changes, including those regarding property tax deductions and some job-related employee expenses, have thrown taxpayers for a loop this season.

“As part of the new law, state and local deductions were capped at $10,000,” says Sweet. “So, if you own a valuable home or other property and your taxes ended up being more than that $10,000, you can’t deduct the extra, and folks in states with higher property taxes may find they have more taxable income than previous years.”

The deduction for unreimbursed employee expenses was also eliminated, he says, adding, “I’ve heard from several clients who owe more taxes because they’d traditionally been able to use that deduction, but can’t anymore.”

Avery concurs. He says that the elimination of the unreimbursed employee expenses has hit mobile employees—salespeople, visiting nurses, and transportation workers, among others—particularly hard, as they’re unable to deduct expenses for uniforms, trade tools, and travel.

“For some, it’s thousands of dollars of difference, which is unfortunate,” he says. “It’s never a good thing when a law unfairly targets one group more than others.”

Avery points out another change people may not notice until they begin filing their returns, is that the 1040 form has been altered significantly.

“The 1040 is the basic form most people need to fill out when filing their taxes,” he says. “The IRS was supposed to create a shorter, easier form, but instead they’ve eliminated the 1040A and the 1040EZ and added some complex changes to the 1040.”

The newly redesigned 1040 form includes six different “schedules” that can be attached to the initial 1040 to provide additional necessary information, he says.

With those schedules, filers can supplement their new 1040 with information that could help them claim certain tax deductions and tax credits and potentially increase their refunds, Avery says.

“Folks doing their own returns should make sure they have good software, because some of it is pretty hard to follow,” he says of the new Form 1040 schedules.

Nick Dietzen, an accountant with the Spokane office of Minneapolis-based CliftonLarsonAllen LLP, agrees that this tax season has been unusually busy, as both taxpayers and accountants bring themselves up to speed on tax reform and other changes.

“Accountants are adjusting to last-minute regulations and tweaks sent out at the end of January,” he says. “Software vendors also have been playing catchup on the changes, and of course, we’ve seen a lot of interest from taxpayers who are concerned about how the changes will impact them.”

Dietzen says he’s heard some of the same concerns from clients this season as those mentioned by Sweet and Avery.

“The biggest one is the changes in withholdings, but we’ve also gotten plenty of questions about the elimination of the unreimbursed employee business expenses deduction,” he says. “Fortunately, I think for most people, the fact that the standard deduction was increased has mitigated that somewhat.”

While the new tax law has accomplished some good things Dietzen says, it has fallen short in other areas, mainly the desire for simplification.

“The new law was designed to lower tax rates, and it’s done that,” he says. “It was also supposed to simplify the tax code, but that aspect definitely wasn’t achieved.”

Like Avery, Dietzen says the IRS handled implementing the new withholdings tables badly and made big changes to the 1040 form that have added to the confusion.

Overall however, Dietzen says taxpayers in Washington state seem to be adjusting to the new tax changes well.

“For Washington residents, the overall tax burden has generally decreased,” he says. “Most won’t be seeing as large a refund, but that has more to do with the withholdings changes than actual tax reform.”

He adds that most married filers with children could see a boost in their tax refund, due to the increase in the size of the child tax credit and in the income threshold for claiming that credit.

Dietzen says that most business owners are also reacting positively to the changes, although some may see added costs due to compliance issues.

“Some businesses are also potentially eligible for qualified business income deductions, which is something we’ve gotten questions about this season as well,” he says.

All three advisers recommend that clients who haven’t yet filed their taxes start gathering their records now, as many tax firms are already quite busy.

Dietzen, Sweet, and Avery all say more taxpayers and accountants are choosing to get extensions on filings this year.

“With some late regulation updates and software vendor issues, it’s taking added time to prepare individual returns, so a lot of people are interested in extensions,” says Dietzen. “Even if you’re usually comfortable doing your own returns, there have been enough drastic changes in the law and the forms that this is a year when it wouldn’t hurt to ask for a professional’s help.”

Avery adds that most firms are willing to check taxpayer’s work for a reduced fee.

“If you’re at all uncertain, there’s value in getting an expert to look it over,” he says. “It costs a bit less than asking them to do the whole thing, and then if you’ve made a mistake you can correct it quickly.”