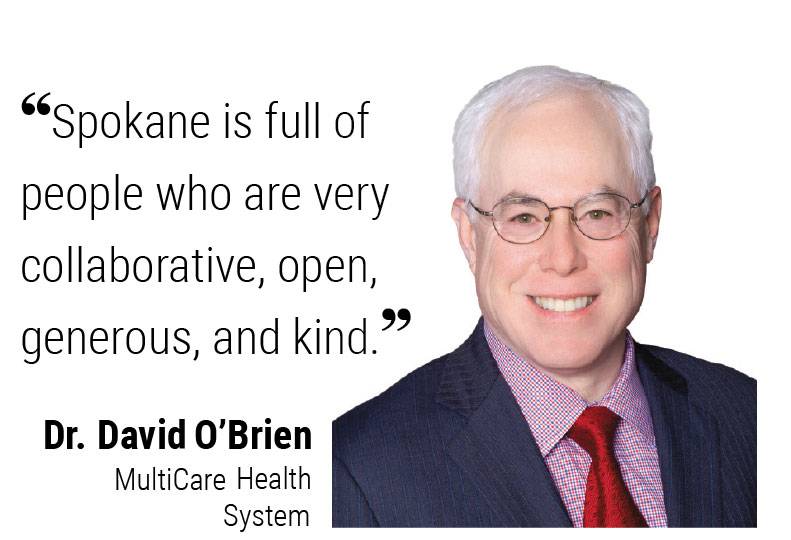 Dr. David O’Brien was largely responsible for overseeing MultiCare Health System’s entrance into the Spokane market in 2017, and has remained in a leadership position here since, guiding the health care network’s operations here.

Now, as O’Brien prepares to leave Spokane for a new position with MultiCare on the West Side, he describes the past five years in Spokane as a highlight of his career.

“My experience in Spokane has been uniformly positive,” O’Brien says. “Spokane is full of people who are very collaborative, open, generous, and kind.”

At the end of the month, O’Brien will become MultiCare Health System’s South Sound region chief executive after having served a similar position here since Tacoma-based MultiCare entered the market nearly five years ago.

“It’s a considerably larger region. There are five hospitals in a 650-plus-provider medical group throughout the Puget Sound region,” he says. “It’s a bit more complicated than the market here because of its size and its scale.”

It’s a role that has remained vacant for years, he says.

“There have been some regional leaders in the past, but it’s been a number of years since they’ve had somebody in that role,” he says.

Since MultiCare arrived in Spokane, the health care network has worked to build foundations for future growth here, O’Brien says.

“For example, we had to implement Epic, our new electronic medical record (system), and we did that in the first year, across two hospitals and 80-plus clinic sites,” O’Brien says. “We did that in 11 months, which is kind of record-breaking speed for a project of that magnitude.”

O’Brien says that staffing has been among his top concerns over the past five years.

“The workforce issue is severe,” O’Brien says. “It’s been tough in health care for years, but the pandemic has really pulled the curtain and shown us that we need more nursing schools, we need more respiratory therapy schools, more training for support staff.”

Spokane’s medical education community is a boon to the community, he says.

“Growing medical education is certainly a strength for this community, and something we should be building on into the future,” O’Brien says.

The Spokane health care community historically has a reputation for collaborating effectively, he says.

“Collaboration and finding ways to work together is deeply ingrained in the culture of the Inland Northwest,” he says. “This community has rallied together to solve some pretty complicated problems.”

During the worst days of the COVID-19 pandemic, hospitals leaned on each other, he says.

O’Brien had spent nearly a decade in California, working for Providence St. Joseph as vice president of medical affairs, then as its chief operating officer.

O’Brien’s health care roots are in family medicine. He practiced for nearly 15 years at a private practice in Eureka, California.

“I basically practiced cradle-to-grave medicine as a family doctor in a fairly small community,” O’Brien says. “Being a family doctor is one of the best things in the world. You build great relationships with your patients, and it’s very rewarding. But over the years, I started doing more leadership work. I found that very rewarding, as well.”

Shifting his focus to administrative roles, O’Brien moved into the field of health informatics in the early 2000s and spent a few years in the Seattle area.

In 2004, he returned to California to become vice president of medical affairs at St. Joseph Health’s St. Mary Medical Center, in the desert town of Apple Valley.

“I have a lot of different experiences,” he says. “I’ve been a chief medical officer of a hospital, I’ve been a chief operating officer, I’ve served as the chief executive officer, and also as a regional leader.”