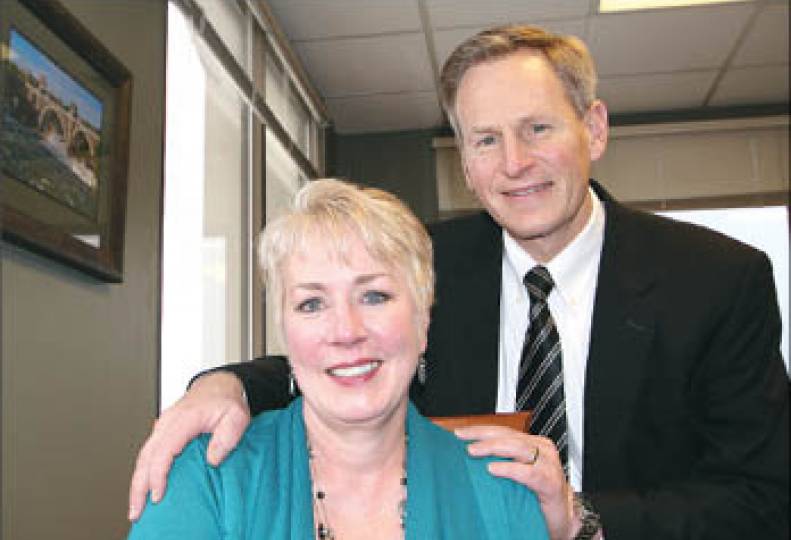 -—Staff photo by Treva Lind
Paul Viren and his wife, Beth, say their company, Viren & Associates Inc., mostly serves clients in the Inland Northwest, but it has some in other states who have moved from here.

Viren, who began advising clients here in 1994, focuses on financial investing and estate planning, as well as consulting and management services for employer-sponsored 401(k) retirement plans.

His wife, Beth Viren, joined the company eight years ago to oversee the firm's work as an insurance broker for employer-sponsored insurance benefit plans after a 25-year career in human resources with Providence Services. Now, she assists employer clients setting up employee benefits plans that include medical, dental, vision, life, and disability among benefit options, and through different insurance carriers.

"I work with employers with as few as two employees and as big as 600 employees," she says.

The company also offers life insurance services at its office, located in a 3,000-square-foot space at 400 S. Jefferson, just southwest of downtown.

"We've always been a diverse company, able to navigate through health reforms or the financial stock market challenges," he adds. "We are a multidiscipline practice."

In addition to the Virens, the company employs four people and is in the process of hiring a fifth person, Viren says.

"We had a good year as a company for 2012," he says, though he declines to disclose revenue growth. "We're adding staff. We track the number of clients we have, and it's also grown. We have several hundred."

Overall, about one-third of the company's clients are businesses, while the remaining two-thirds are individuals who seek financial and estate planning services. The couple says a majority of the company's work involves providing financial advice for clients' investments and estates, 401(k) plans, and life insurance needs, while about a quarter is dedicated to employer-sponsored health benefits support.

The company's 401(k) plan work is one of the fastest-growing parts of its business, Paul Viren adds. Its smallest 401(k) employer group has nine people and the largest is up to 450 employees, he says.

For its overall services, the company lists on its website some "chapters of life" that can alter people's financial goals: Career, marriage, children, college planning, retirement, and death of a loved one. For some people, other chapters might involve financial reassessment due to divorce or disability.

"We try to help individuals approaching their goals at whatever stage they're in," Beth Viren says.

The couple met at Whitworth University, where they both graduated in 1978 with psychology degrees.

"It seems psychology plays a big role when it comes to finance," Paul Viren says.

His passion, he says, is helping people get their financial estates in order, to prepare for the future as well as in the event of their death. He has served 26 years on the Spokane Estate Planning Council board, which promotes education and a multidisciplinary approach to estate planning.

He is a registered investment adviser who offers securities investments through LPL Financial, a national financial services company with corporate offices in San Diego, Boston, and Charlotte.

Most of Viren & Associates' clients are based in Spokane, but the company has some clients in other states, such as Florida and Texas, who have moved from here.

Last year, Paul Viren began serving a three-year stint on the National Association for Estate Planners & Councils board, which supports 225 regional estate council groups and 30,000 estate planning advisers in the U.S., he says.

"We support the councils and estate planners, and we provide website support, education, and a national awareness week as a way to reach out in asking people, 'Is your will done? Are your beneficiary designations up to date?'" he says.

Viren adds that many people don't realize even simple steps they should take to prepare their estates regardless of whether they have a high net worth.

Prior to starting Viren & Associates, he first was exposed to estate needs while serving a six-year stint as a senior director of development at Whitworth University, where he helped people set up charitable and planned estate giving to the institution.

"That's where the passion caught fire for doing broader estate planning with people," he says. "People make mistakes, or don't know. We forget that retirement account beneficiary designations can trump wills and other planning vehicles like trusts."

He says families often don't communicate well, or even face the details, about future allocation of assets or how they've designated beneficiaries on life insurance documents and retirement accounts. An estate plan ensures that real estate assets, bank accounts, securities, insurance benefits, and personal property will be transferred to beneficiaries.

"Have a family meeting or some type of written road map with the practical instructions, or at least say, if something happens to me, this is the person to talk to," he says.

He gives an example of someone they know who for some 60 years was a stepson and considered the older man to be his dad. After the younger man's mother died, he took care of and held power of attorney for the elderly stepdad.

"When the dad passed away, his retirement account still had the wife's name on it as beneficiary," Paul Viren says. The asset went to an elderly sister who, under law, was considered the legal heir.

The Virens say they've seen many examples of people forgetting to update beneficiaries, such as removing an ex-spouse's name or updating to reflect children's names.

Although he advises clients about estates, Viren & Associates refers people to attorneys to draw up legal wills. If a person dies without a will and a guardianship directive in that will, the probate court must distribute a deceased person's assets in a legal process that can take several months to several years.

He adds, "You don't have to have a big estate; you just have to be alive. If you're dead, it's too late."

For employer clients, Beth Viren says the company is preparing to help them understand the next wave of health care reforms starting in 2014, which include impacts from new state insurance exchanges set to begin that year.

The current legislative session is expected to address Obamacare provisions that require the state exchanges. The concept seeks to ensure that participating private insurance carriers provide state-regulated and standardized health-care plans to serve primarily individuals buying insurance on their own and small businesses with up to 100 employees.

"There are a lot of changes coming really fast and not enough answers coming fast enough," she says. "We'll reorient ourselves quickly as it comes out, and we'll keep clients advised. We will work with each employer on how to keep the best benefits for employees, but still keep it affordable."

Overall, Paul Viren says the staff stays informed about regulatory and tax changes. He says some clients were concerned about a possible substantial hike last year in the federal estate tax amount for estates worth more than $5 million, but the tax ended up being set at 40 percent, up from a 35 percent tax. Washington residents who inherit more than $2 million are subject to the state's inheritance tax.

"It was a lot to do about nothing," he says about the federal estate tax rate change. "Now, we know it's this one number for gift and estate taxes. It was better than most people had hoped for."

Beyond the numbers and facts, Paul Viren says he ends all his estate planning sessions in the same way. He asks that the client write a handwritten letter to a loved one or to family, with the intent that the letter be sealed and opened by the designated party after the client dies.

"Handwritten love letters are the most important legacy someone can leave," he says. "It won't be the money or the home. Take some time to write about love, relationships, how you cherish others, how they're important to you."

He adds, "It's the psychology of the business."