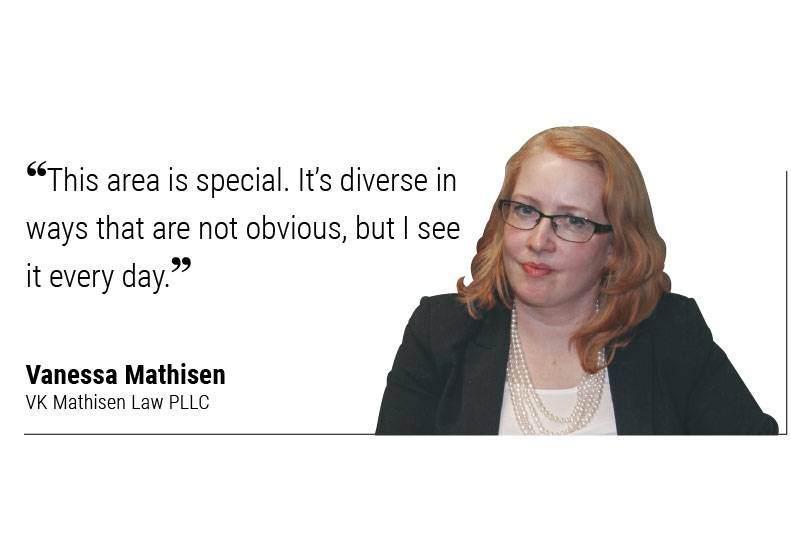 The immigration landscape in Spokane is larger than it seems, and there really aren’t many immigration lawyers here, says Vanessa K. Mathisen, owner of VK Mathisen Law PLLC.

A common misconception is there isn’t diversity in Spokane, she says. In her practice, however, she meets on a daily basis with people coming from all over the globe, including Burma, Afghanistan, Iraq, Belarus, Ukraine, and a host of African countries.

“I think this area is special. It’s diverse in ways that are not obvious, but I see it every day,” says Mathisen.

Since graduating from Gonzaga Law School in 2016, Mathisen has been immersed in immigration law and the undocumented community. Most of her referrals are through word of mouth, and, although she has a website and Facebook page, that is the extent of advertising she does to promote her services.

People come to the U.S. for various reasons, Mathisen explains.

“Some are trying to escape a bad or violent situation in their country. Others have family here, and others come for more opportunity because they are starving,” she says.

Since opening her practice in 2019, she has met with about 200 clients and currently has roughly 60 active cases. Located on the second floor of the One Rock Pointe building, at 1212 N. Washington, the firm has three employees and is trending 20% higher in revenue from the previous year.

The predominant group living in Spokane are refugees from The Lautenberg Program, a family reunification program that helps certain religious minorities from the former Soviet Union and other countries resettle in the U.S.

“Immigration law is very strict as to who it will allow to remain in the U.S. as an asylee,” says Mathisen, “Coming as a refugee—you’ve won the lottery. You’ve got the golden ticket.”

Mathisen moved the practice on Feb. 1 into its 580-square-foot office space at Rock Pointe, and already is considering moving to a larger space. She says she signed her lease with the understanding that she would be able to move within the building if her practice grows.

“The business part is different from the practice part, but (business) is where I think I have strong skills,” she says.

Mathisen currently is exploring ways to scale the business and simultaneously make it a place where people want to work. She has a phone system that will answer every call, and she’s considering implementing a virtual support staff.

She charges $100 per consultation and flat fees for services rather than conventional billable hours, as is typical in immigration law, although the fee structure is based on an estimate of how long she thinks a case will take to complete. For example, Mathisen says she charges about $3,500 to help obtain a Permanent Resident card, also known as a “green card." According to U.S. Citizenship and Immigration Services, it typically takes between two and three years to receive a green card.

Mathisen works out payment plans with many of her clients, and her practice also recently has been approved for the LawPay online payment program, which offers “buy now, pay later” financing through a service called ClientPay.

Mathisen says she took a law practice management class in law school, but even before she went to law school, she already had years of experience managing and working in legal offices, and also working in restaurants as a server.

“Working in restaurants, you learn to triage your priorities. You learn about labor costs and overhead expenses. You can’t run a business without knowing that,” she says.

Mathisen says being a lawyer and owning her own practice has always been her goal. She had her first daughter at 17 and it took her 13 years, from 1995 to 2008, to finish her transfer credits from community college to a four-year institution.

In 2010, she received her bachelor’s in labor studies from Chapman University. Her spine was fractured in a car accident, and the injury forced her to take her Law School Admission Test standing up. She had surgery in July of 2013 and the following month moved from the Seattle area to Spokane to attend law school at Gonzaga University.

In her second year of law school, Mathisen worked part time in the prosecutor’s office on domestic violence cases, but she found she didn’t like the work as much as she had expected to. When a position accompanying refugees to citizenship interviews opened at World Relief Spokane, a nonprofit that has been resettling refugees and immigrants for almost 30 years, Mathisen asked the supervising attorney for a part-time position that allowed her to learn how to work on naturalization cases.

When she graduated from Gonzaga, she was hired as the director of legal services with World Relief, where she stayed until opening her own practice.  During her time there, Mathisen says she hired two employees in addition to interns from Whitworth University and Gonzaga. She also increased cash revenue by 50% in her first year and overall revenue, which includes grants, by 30%, she says.

She adds, however, that World Relief Spokane is embroiled in a discrimination lawsuit for allegedly rescinding employment to an immigration attorney because he's gay, and she doens't approve of such hiring practices.

Mathisen says she loves her work because it allows her to meet people with different perspectives from all over the world, although clients often are initially wary of her efforts to help, because they’ve experienced a great deal of betrayal and abuse.

“You’re just dealing with a human who is struggling and wants to know they and their family are going to be OK,” says Mathisen.