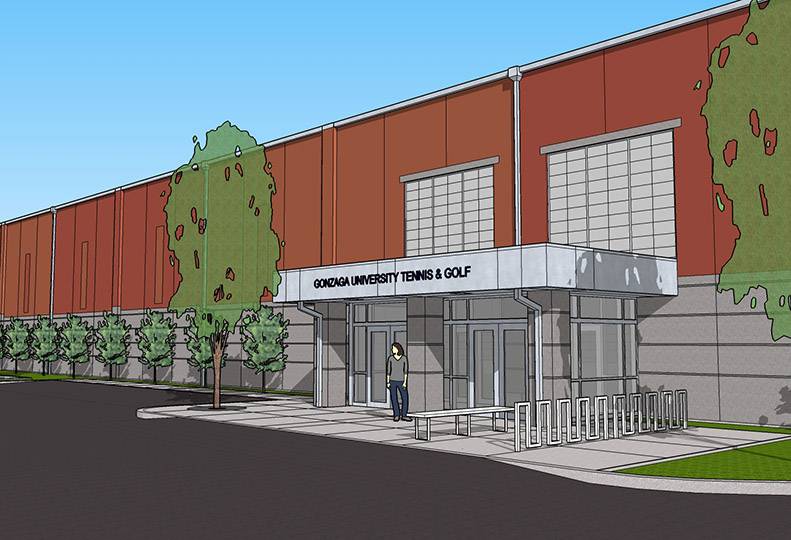 Walker Construction Inc., of Spokane, has been awarded a contract to construct Gonzaga University's new $6 million tennis and golf center on vacant property south of Mission Park, a few blocks east of campus.

The complex will be constructed on a 3-acre parcel the university owns at 1220 N. Superior. Ed Walker, a principal at Walker Construction, says the project is expected to get under way this month and to be completed by the end of October.

The two-level, 74,000-square-foot indoor facility will have six regulation varsity tennis courts for practice and tournament play and a golf practice facility on the main level, says Ken Sammons, Gonzaga's director of plant and construction services.

The golf program's space will include a small putting green, a sand trap, and at least two golf simulators. The main level also will include locker areas, showers, restrooms, a training room, and coaches' offices for men's and women's tennis and golf programs.

A smaller mezzanine level will allow room for spectator viewing with six two-row bleachers stationed above the ends of each tennis court. The upper level will have restrooms and mechanical rooms.

Sammons says about 24 student-athletes participate in the university's tennis program, and a similar number are in the golf program.

Gonzaga had two architects who are employed by the university as staff architects design the complex in consultation with outside architects here, including some from ALSC Architects PS, of Spokane, Sammons says.

The university has planned for the new complex since 2008, when the university demolished its outdoor tennis courts to make room for soccer field improvements on the southwest part of the campus, Gonzaga's website says. At that time, the university moved its tennis matches to the Spokane Racquet Club, located at 1903 S. Dearborn on the South Hill.