Some supporters unsure whether new codes will encourage such projects 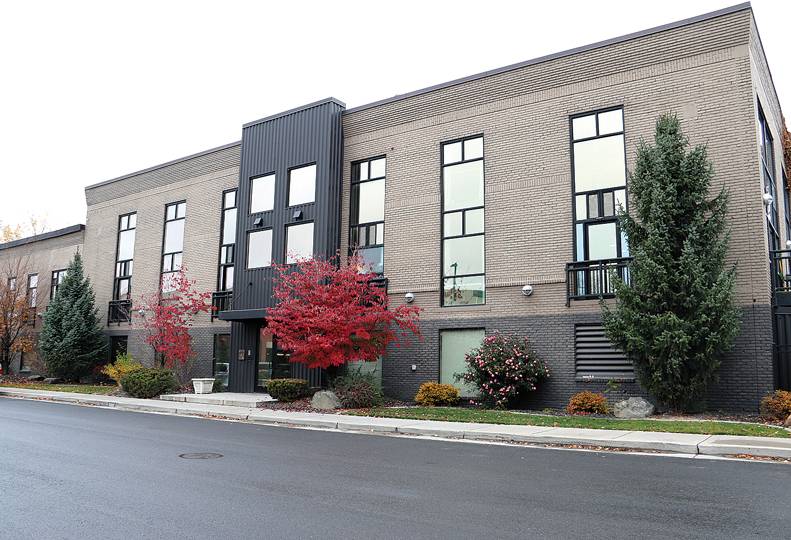 -Erica Bullock
The Iron Bridge Condos building, located along the Spokane River east of the University District, is one of the few condominium projects to be developed in Spokane in recent years.

New Washington state legislation has been signed into law with the goal to reduce barriers to condominium construction and development. However, some supporters of the measure say the changes aren’t enough to stimulate condominium development in Spokane County just yet.

Sen. Mike Padden, of Spokane Valley, and Liberty Lake-based real estate developer Jim Frank, CEO of Greenstone Corp., both say they have worked together for years to ease building restrictions for condominium development in the county as a way to increase access to affordable homeownership.

Padden says, “I’m a big proponent of homeownership and I think there’s a lot of folks, especially folks who are just getting into the market, who would like to purchase a home or a condominium.”

“Condos are a real opportunity for access to ownership for people who need homes,” Himebaugh says.

Padden says the original version of the bill, Engrossed Substitute Senate Bill 5024, called for the removal of inspection requirements for condominiums with less than six units. That version was revised a number of times before the bill passed unanimously in both the Senate and the House and was made effective in July.

The version of the bill that has been signed into law keeps the inspection requirements in place for condo developments, but it removes the need to use a forensic engineer, a type of specialized inspector. It also addresses a financing option for condo developers as well. Supporters say these changes to the Condominium Act will reduce costs for both developers and purchasers.

Greenstone’s Frank, however, is more skeptical. He argues that whether those two changes are enough to motivate builders to begin development in Spokane County still is unknown.

Joel White, executive officer of the Spokane Home Builders Association, says he recently has asked building officials with the cities of Spokane, Spokane Valley, and Spokane County about newly permitted condominium developments and, so far, hasn’t heard of any such permitting.

The first is a requirement for a statutory warranty. The warranty provides protection to condo owners for building defects up to 10 years. The warranty also can be transferred to the next condo owner.

Frank contends, however, most if not all 10-year-old buildings will have some defect. He says the same warranty requirement, which doesn’t apply to other types of residential structures, has created an environment for many condominium associations to sue developers for damages.

These conditions also have affected how insurance companies treat condo projects, Frank says. Rather than providing insurance for a project that will inevitably get sued, insurance companies raise premiums or decline to provide coverage altogether, he says. Without construction insurance, lenders may be reluctant to finance a condominium project as well.

Frank says he’s interested in building condos at an affordable price point. Buildings he envisions would be much smaller in size than a high-rise. They would be two-stories tall and have up to 10 units. For this type of small-scale development, moisture damage wouldn’t be able to reach as many units as in a high-rise and could be easier to detect and repair, Frank says.

Frank and Padden say they wanted the Legislature to approve an option for some counties to exempt condo projects that have fewer than six units while still allowing the counties that don’t want to exclude any projects to do so, but that option was stripped from the bill.

Frank says another way to help ease condo building restrictions would be for the Legislature to add a requirement to have condo associations notify builders of any defects within the 10-year warranty period before bringing a lawsuit to repair damages. That didn’t make it into the final version of the bill either.

He says current condo laws have created an environment for condo associations to sue developers to correct any problems even before the developer has been made aware of defects or damage and given an opportunity to make repairs.

The second state requirement affecting affordable condominium development, Frank says, is the condition that a third-party consultant, specifically a forensic engineer, must review the condo architect’s plans and provide inspections throughout the condo building process instead of the condo architect.

Himebaugh, of BIAW, explains that the forensic engineer requirements created a barrier to affordable homeownership in Spokane because, “if you’re building in Spokane, some of these inspectors that are required in condo developments only exist in Seattle, so you have to pay to fly them out multiple times to inspect your condo development.”

With the removal of that requirement part of ESSB 5024, inspections now can be completed by the architect of record for condo projects.

Padden says the old requirement increased the cost to develop condo projects in Spokane County enough to price out potential entry-level homeowners from the market.

“Every time the price goes up there are people who … can’t get the loan,” he says. “They just don’t have the income that would cover the down payment and the monthly mortgage payments.”

Frank explains that the third state requirement hindering condo development involves additional development standards for condominiums that go beyond what is required by state building codes for single-family and multifamily development.

Himebaugh says, condo developments have several different inspection requirements than apartments have, even though they can be virtually the same building.

“No one would say that an apartment complex is unsafe because they still have to meet all the safety codes and regulations,” Himebaugh says. “Condos just have a whole lot more liability, and it makes it unappealing for a builder to invest time in a condo development when they have to go through those additional hoops.”

Another part of ESSB 5024 addresses condo development financing. The measure allows for condo builders to use deposit funds paid by the purchaser for construction costs of the condo project. The deposit funds must be used on the building that the depositor’s condo unit is located in. The builder also must obtain a surety bond to cover the amount of the deposit, made payable to the condo owner.

“Big high-rises are just luxury condominiums. They’re not meeting the needs of the middle of the market. They’re not providing affordable housing,” he contends.

He adds that he’s not sure that the latest changes to Washington’s condo codes will make much of a difference.

“The requirement that the architect can do the inspections instead of the forensic engineer is a little bit of a help, but I don’t know for sure that it’s enough. The change is so small that I’m not sure anybody even knows of it,” Frank says.

Himebaugh says removing these remaining obstacles facing condo developers would make it possible for builders to construct more affordable housing units. She says construction costs need to stay low so that the end price of that unit is less expensive, and more people have access to ownership to begin building wealth.

Padden says he feels excited about the changes to the condo law, even though some issues remain.

“I hope more of the builders and developers will look at this and decide to go forward and offer more housing that’s more affordable for entry-level purchasers,” Padden says.