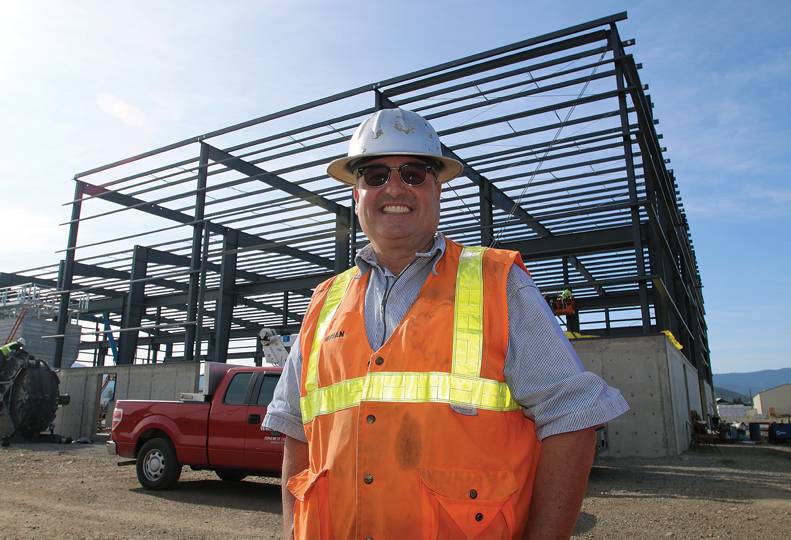 In its 100th year of operating in the concrete construction business, Newman Lake-based Wm. Winkler Co. may be the epitome of the family business.

Yes, Brian Winkler is the president of the company his grandfather started in 1919. And, yes, his father Jack and uncles Bob and Jim ran it before Brian. And, yes, Brian’s sons Luke and Sean spent this summer working there. But the family aspect of the business is more widespread than that.

“We have fathers, sons, and grandsons from other families working for us,” Brian Winkler says. “There are families with mothers and sons, fathers and daughters and host of husbands and wives who have worked, and currently are, working here.”

Jack retired from the company in 1981. Bob and Jim took over for him, and Bob later retired. Jim was ready to get out when Brian bought the company from him in 1999. Brian took over with 16 employees. Today there are 150 employees.

“We’ve been blessed by Spokane,” says the 52-year-old Winkler. “There’s just no better way to put it. We have good, skilled people working for us.”

Winkler declines to disclose the company’s annual revenue, but he says it has experienced a healthy rate of growth in the last five years.

“And they paid their bill every time. Central Pre-Mix never lost a dime to Winkler,” Murphy says with a laugh.

Murphy, who retired as president from Central Pre-Mix in 2006, credits Brian Murphy for taking Wm. Winkler to new heights.

“Today, they do all kinds of work,” Murphy says. “They were just curbing and sidewalks up until Brian took over.”

Most recently, the company’s largest and most visible project involved completing the exterior concrete work of the Amazon.com Inc. fulfillment center on the West Plains, which is expected to open this fall.

Located on 30 acres of land at 5516 N. Starr Road near the state line, Wm. Winkler occupies a 15,000-square-foot building. About 12,000 square feet is dedicated shop space with the remainder for offices, Winkler says.

And rising to the south of the main building is the framework for a $3 million, 26,000-square-foot building that will eventually accommodate a manufacturing facility for Inland Northwest Precast. The company was founded last year and also is based in Newman Lake. The building will be finished at the end of September.

Winkler and his wife of 30 years, Ann, have a personal financial interest in Inland Northwest Precast independent of Wm. Winkler Co., which doesn’t have a stake in the precast company.

“We have about 25 to 30 current projects in play right now and have at least that many in the queue for the rest of the year,” Winkler says, adding that that’s generally been the case for the last few years.

The company is currently in the process of building roundabouts on U.S. 2 near Hayford Road in Airway Heights, one on Five Mile Prairie on Strong Road, and another near the Interstate 90-Medical Lake interchange. The company is working with Spokane Valley-based N.A. Degerstrom Inc. on the Medical Lake roundabout.

Wm. Winkler is also working on a North Spokane Corridor project with Spokane-based Halme Construction Inc. and has several other active projects in Eastern Washington and North Idaho, he says.

Winkler says he’s never seen this much construction activity in Spokane County in his lifetime.

“I travel a lot, and when I go other places, it feels like Spokane has hit the map,” he says.

While national and international outlooks by economists appear mixed on the future of the economy, Winkler says he feels confident in the company’s standing.

“In 2008 (when economists marked the beginning of the Great Recession), we dug into our reserves,” Winkler says. “I’m proud that we didn’t lay anybody off. We ask for loyalty from employees; it’s only fair that we be loyal to them.”

Based on their current level of interest, Winkler says Luke and Sean are likely to go to work for the company in the future.

“I’ve been hanging around the family business since I was 10,” Winkler says. “I would’ve rather been here than at school. Once it gets in your blood, it never really leaves.”