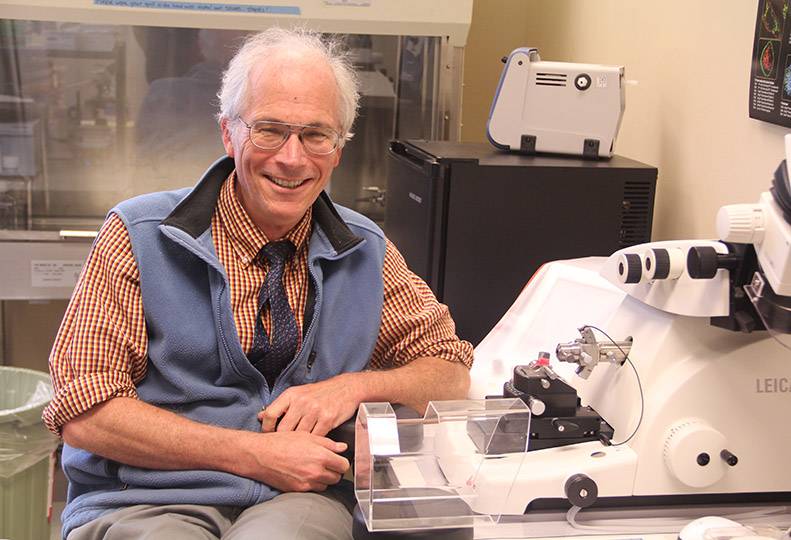 -—Staff photo by Jessica Valencia
Mike Gibson, head of clinical pharmacology for WSU, says he expects the pharmacy college will be able to occupy its new space on the Riverpoint Campus this fall.

As the newest academic building addition to the University District nears completion, Washington State University is gearing up for the College of Pharmacy to start its move to Spokane from Pullman next month.

Gary Pollack, dean of the pharmacy college, says approximately 325 faculty, staff, and students in the pharmacy school will move to the Spokane campus by Jan. 1, from Pullman, and will join 250 peers and colleagues who had been on the Riverpoint Campus previously.

Some portions of the college have operated here for years, including third-year doctor of pharmacy students, and its programs in nutrition and dietetics.

By the start of next year, Pollack estimates roughly 80 faculty and 495 students will be located here, with most of the college operating out of the new Pharmaceutical & Biomedical Sciences Building.

In addition to the college consolidating into one location, Pollack anticipates annual research expenditures will increase drastically here in the next seven years, aided in part by hiring faculty whose research topics mesh with that of the college.

"We're one year into what I have viewed as a seven-year plan to hire about 20 new faculty," Pollack says. "We might actually get that done in three years."

As of mid-June, the college had five letters of offer out to future faculty members, says Linda Garrelts MacLean, associate dean for professional education and outreach at the college.

All but 10 of the College of Pharmacy's 55 professors now are in Spokane, with the rest remaining in Pullman to run the pharmaceutical Ph.D. program or research labs not yet ready to move.

Of the 110,000 square feet of space in the Pharmaceutical & Biomedical Sciences Building, Pollack estimates the College of Pharmacy will occupy about two-thirds of that space, with the rest used by the university's medical students. The $78 million addition to the Riverpoint Campus is slated to be completed this fall, and Mike Gibson, head of the clinical pharmacology department, says the college expects to be able to occupy the space in October or November.

"Not all of our college is going to fit into that building," Pollack says. "We'll still have faculty and activities going on in three other facilities on campus, but the new building will be the central hub."

"Now that we have greater capacity with the new building, we're on the move with regard to expansion on the research side," Garrelts MacLean says.

Pollack expects research spending at the college to increase markedly during the next seven years. For the fiscal year that ended June 30, 2011, the latest period for which data is available, the College of Pharmacy spent $400,000 in grant money on research. Pollack says new faculty are in the process of transferring grant dollars, which makes this year more uncertain than most.

Pollack projects that the college will spend a minimum of $3 million for fiscal year 2014, which started at the beginning of this month, with a target goal of $15 million in annual spending by 2020. He says he expects the pharmacy college will continue to focus on three broad areas of research: drug discovery, drug development, and health care delivery models.

The college has conducted "modest" research in all three areas, he says, and will keep those research topics in mind as it continues to look for faculty candidates over the next three to five years.

"I've been maybe a little bit surprised, but really pleased, with the quality of the faculty candidates we had and subsequently the quality of faculty we've hired," Pollack says. "The reason I say that is we don't have a mature campus, there are lots of things we don't have here," specifically a clinical research center, which conducts clinical trials and typically is found at a teaching hospital.

Within drug discovery, Pollack says the college likely will focus on target identification, which determines the cells or portions of cells a researcher wants a drug to interact with. Drug development concentrates on taking a potential drug from a discovery phase and finding ways to use it in humans, he says. Both drug discovery and drug development have been areas that large pharmaceutical companies have invested a lot of time and energy into, but he says companies have since backed out, leaving much of that work to contract-based labs and biotechnology companies. One such area of drug development is pharmacogenomics, which is also known as individualized or precision medicine, and uses a patient's genetics to determine the best drug for treating them.

"We're trying to expand this idea of precision medicine much more broadly than it is right now," Pollack says, by combining it with other patient factors such as nutrition.

The third area the college will focus on is analyzing the health care delivery model, which asks the question of whether delivery of care to patients is effective, from both a health and an economic standpoint.

"Spokane represents a great place to be if you're interested in that particular question because we have ready access to an urban population, an urban underserved population, and a rural population," Pollack says.

About a third of the faculty is working in one of those areas, he says, but he anticipates that when hiring is complete, about two-thirds of the faculty will be involved in one of the three areas of research the college has identified.

Gibson, professor and chairman of the clinical pharmacology department, has devoted more than 30 years to genetics research that looks at human genetic disorders, the disease process, and new approaches to treatment.

Recent work by Gibson and three other researchers includes testing an experimental drug's effectiveness in treating an inherited disorder that has characteristics similar to autism and epilepsy. That research was funded by an approximately $740,000 grant from Bethesda, Md.-based National Institutes of Health, a medical research agency that's part of the U.S. Department of Health and Human Services.

"The strongest current strength in the college is probably in the area of pharmacogenomics, or how we respond to drugs," Gibson says. "We're all kind of moving toward this concept of individualized medicine."

Pollack says the goal is to have about 75 graduate students actively participating in research, an increase from the roughly 25 students currently involved in research.

Pollack anticipates the number of students within its doctor of pharmacy program will remain the same, with entering class sizes of between 100 and 120 students. However, he says he would like to see the Ph.D. in pharmaceutical sciences program triple to 75 students from 25 currently.

"Things are going better than I possibly hoped when I arrived here almost three years ago," Pollack says. "I couldn't be more pleased or more optimistic."

Although initial discussions about moving the college from Pullman to Spokane started before Pollack was hired in 2010, he says one benefit was the higher concentration of medical facilities here, providing more opportunities for rotation sites for students.

Garrelts MacLean says, "In order for a college to be really strong you have to have both a professional side and a research side." That hands-on interaction in a clinical setting is important for students, who are being taught a holistic approach to pharmacy that includes on some level caring for patients, she says.

"Part of the whole equation would be having pharmacists be responsible for making some decisions in the future, where the pharmacist is really in charge of the (drug) regimen," Garrelts MacLean says. "It's the big picture; it's not just pills."

She says with the changing health care landscape, "we have to identify solutions that are going to be creative to provide care for people. Pharmacists are in a great position to be part of the solution."