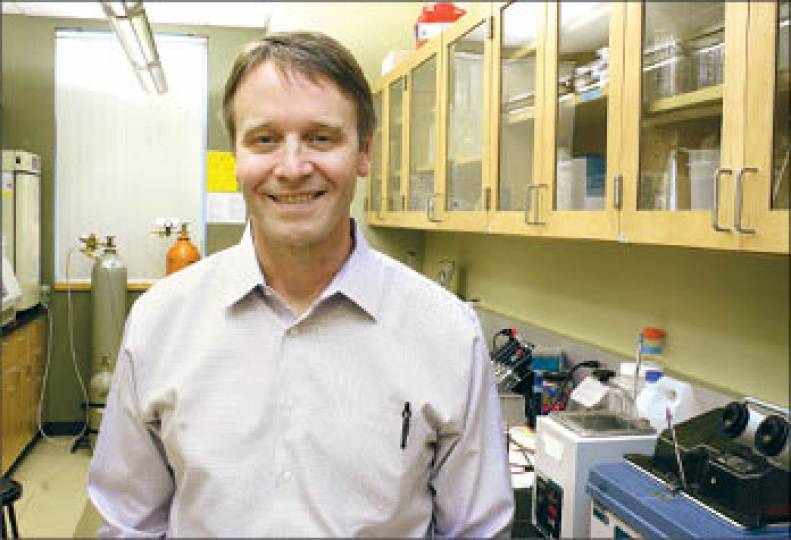 -—Staff photo by Mike McLean
Ken Roberts, director of the Spokane unit of WWAMI, is part of the team of educators here that is working to develop the curriculum for the second-year medical program.

Thanks to a two-year pilot program set to start in the fall, medical students in all four years of medical school soon will receive education and training based at the Riverpoint Campus, in Spokane. Even before that pilot program starts, public and private funding efforts are under way to make it permanent.

Under the pilot program, 20 students will begin their second year of medical school here in September, with 20 more second-year students to attend beginning in September 2014, says Doug Nadvornick, a spokesman for Washington State University Spokane.

WSU Spokane's facilities at the Riverpoint Campus, located in the University District east of downtown, make up the designated health sciences campus of the WSU system. The $78 million, 110,000-square-foot Biomedical and Health Sciences Building, which will be completed in late 2013, will be home to the WWAMI Spokane medical program.

Until then, medical students here will continue their education and training in other buildings on the Riverpoint Campus and clinical settings throughout the Spokane area.

WWAMI, which stands for Washington, Wyoming, Alaska, Montana, and Idaho, is a publicly funded partnership with the University of Washington School of Medicine, in which participating medical students from the five states receive much of their medical training in rural communities.

The pilot program will mark the first time that any medical students participating in the 41-year-old WWAMI program will be able to attend their second year of medical education outside of Seattle.

"We've got a $5 million request in front of the Legislature for continued funding and another $2 million to pay for equipment and researchers who will be part of that program," Nadvornick says.

The pilot program here will aim to demonstrate the potential to expand the second year of medical school throughout the WWAMI program, and it proposes to adapt the second-year curriculum to make it more useful to students, Nadvornick says.

The second year of the WWAMI program, as it's currently held at the UW School of Medicine, is heavily lecture based, Nadvornick says. For the pilot here, the medical school aims to make the second year more case based.

"Students will have less lecture, but will go into classrooms and try to solve more problems," Nadvornick says. "The UW says it thinks it can do that and wants to test it in Spokane."

After the pilot, it will be up to the Legislature to fund it on a permanent basis, he says.

While the WWAMI program has been cited as a national model for training physicians in rural areas, the current number of admissions into the program isn't keeping up with the need for rural physicians, says Ken Roberts, director of the Spokane unit of WWAMI.

Roberts is part of a team of educators working to develop the curriculum here for the pilot project.

He says WWAMI Spokane currently has a faculty of 12 educators, who are augmented by postdoctoral researchers and ancillary laboratory researchers.

The pilot project will add a "fairly robust number" of about 11 faculty members, he says.

At 120 students per year, the school would require total faculty of 52.

"For a medical school, that's considered tiny," Roberts says. "That's just where we would need to be to get launched, and we would grow from there over time."

Greater Spokane Incorporated, Spokane's combined chamber of commerce and economic development council, sees the medical school funding as a priority for the region.

So far, the community has committed $4 million to support the second-year program and recruit faculty and researchers here, says Rich Hadley, president and CEO of GSI. The funds include about $2 million granted by the Health Sciences & Services Authority of Spokane County and $850,000 from the Empire Health Foundation, he says.

Most recently, a private effort to raise $1.4 million is nearly complete, Hadley says.

"Private efforts in the Spokane business community have been a dominant and dynamic influence in getting a medical school for Spokane," he says. "Now, without a doubt, WSU and UW have money in the game and are engaged financially."

"There's overwhelming awareness in the Legislature, partly because of the great work the community did to push for budgeting for the new building," Hadley says.

Now, GSI is attempting to persuade the Legislature and the governor's office that the economic impact of a four-year medical school here will reach beyond the Spokane region to benefit the entire state.

GSI commissioned a study a few years ago that estimated the statewide economic impact of a four-year medical school in Spokane would exceed $2 billion and create 12,000 jobs by 2030, Hadley says. Of that, the economic impact here would be $1.6 billion—and 9,000 jobs, he says.

Those estimates assume a four-year medical school here would grow to admit 120 students annually and attract other growth in biomedical and health science programs, he says.

"Our goal is to increase it to have 120 students ultimately per year," Hadley says. "That will require an investment by the Legislature each biennium." he says.

As part of its lobbying efforts, GSA provided lawmakers with maps showing hometowns of their constituents in the WWAMI Spokane program and in the WSU College of Pharmacy, which also will move to the Riverpoint Campus, Hadley says.