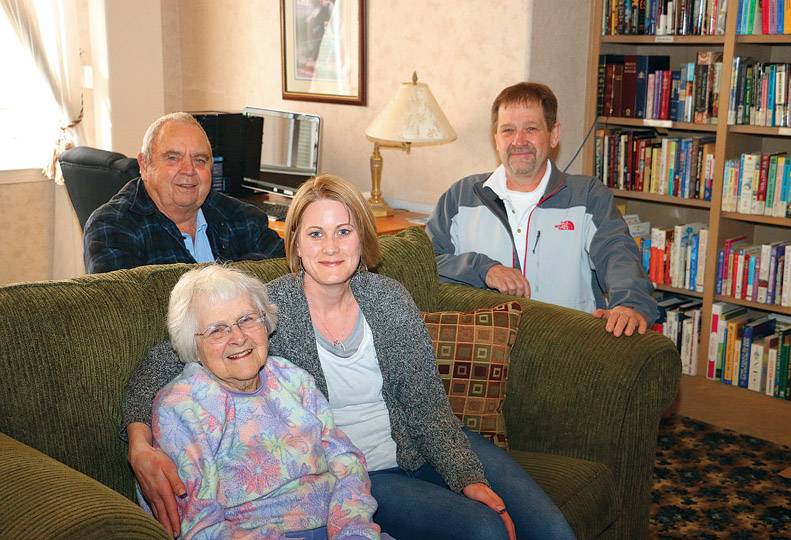 Jim Coghlan says he would put Courtland Place, an independent senior living facility in the Spokane Valley, up against any upscale retirement complex in the area. He’s so confident of how well it would match up that he compares the facility to a luxury car.

“It’s a Cadillac,” says Coghlan, who is an owner in Wilson-Coghlan LLC, of Spokane, which bought Courtland Place in 1997 and now owns and operates it. The 42-unit facility is located at 1309 N. Evergreen, a quarter-mile south of the Interstate 90-Evergreen Road interchange.

Lofty cathedral ceilings greet visitors as they enter the community center. Each ground-level living unit was custom designed and has its own private patio and grass courtyard.

General Manager Jim Larsen says 39 of the 42 units there currently are leased, for a 93 percent occupancy rate. He said the facility has consistently been close to capacity over the last five years. Including Larsen, Courtland Place employs nine, full-time staff members.

The smallest units Courtland Place has to offer have one bedroom, one bathroom, and a total of 723 square feet. However, each unit has lofty 10-foot high ceilings, making the residences feel more spacious than they are. The facility also has one-bedroom, two-bathroom units that include a den and have about 1,100 square feet of living space, Larsen says.

The expansive grounds are walker friendly, Coghlan and Larsen say.

Storage units, evening meals, and utilities (except for phone service) are included in the monthly rent. The facility also offers garages for residents who still own vehicles, and a garage costs an additional $100 per month.

Coghlan brought in Larsen, his personal friend, to run the facility about eight years ago.

“Jim offered to help out for a month or two, and I made it so he couldn’t get out,” Coghlan says with a laugh. Since that time, the two men have put together a roster of tenants who they believe share a sense of togetherness that can be tough to attain in a retirement setting.

“I want to see strong family support accompany our residents,” Larsen says. “When that isn’t present, retirement living can be very challenging for residents.” He says when he and Coghlan see residents with family support, the residents in turn are more likely to be supportive of each other.

A high number of Courtland Place residents also are active volunteers in the surrounding community, Larsen says. Valley Hospital is a big recipient of those volunteers, as it is just a 25-minute walk west of the retirement home.

“At the hospital, area schools, they’re all over,” Larsen says.

He says Courtland Place residents range in age from one couple in their late 60s to people in their mid-90s, with an average age of around 83. Anyone over the age of 55 is eligible to apply for residency there.

However, none currently at Courtland Place can call the facility home longer that Camilla English. At 88, English has lived there since shortly after the facility first opened.

“My husband and I moved here because we wanted to,” English says. He passed away after eight years there; however, English is still going strong. She runs Courtland Place’s library and computer room, organizing, ordering new, and shipping out old reading material.

She said she’s had hip replacements, but she’s back to walking twice a day. English says she’s committed to “staying healthy and to keep moving.”

In English’s opinion, Courtland Place residents are mobile and active.

“We have more people here who are active,” she says. An outside trainer holds exercise classes every Tuesday and Thursday morning.

“A lot of people still drive their cars. For me, this has been a pleasant and a safe place to live,” English says.

Only two of the facility’s doors are unlocked through the day, from 6 a.m. to 6 p.m.

“This is a wonderful place,” English says. “You truly get an opportunity to know everybody here. It’s nice to be able to walk down the hall into the dining room and not be a stranger.”