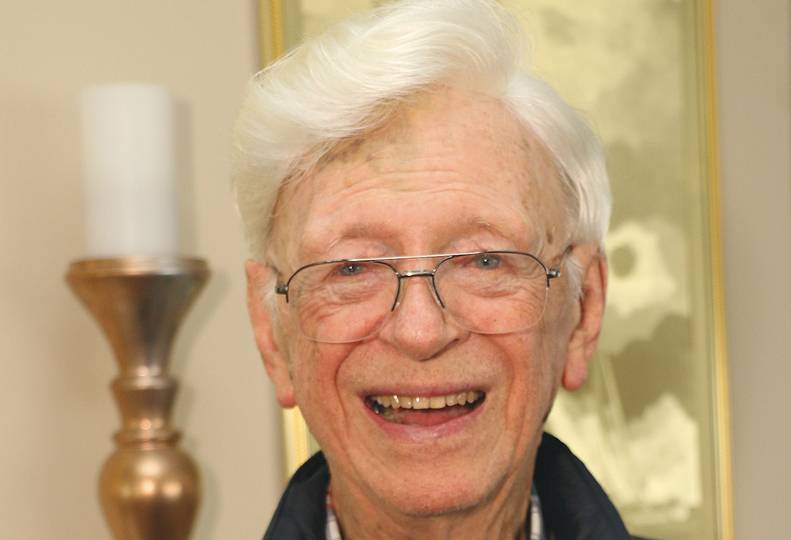 -Mike McLean
Phil Kuharski spent his career in Spokane’s banking industry, but he also developed a niche for himself as an economist and is one of the co-founders of the Real Estate Report.

Phil Kuharski, the former Fidelity Mutual Savings Bank executive long known as the leading economic authority on the Spokane real estate market, says he’s been working with numbers since he was 6 years old.

By the age of 10, he was keeping an index card file of people around him, evaluating them with a system that gave numerical values to attributes such as intelligence and integrity.

“At one time, I believed everything could be quantified,” he says. “I came to the conclusion early on that knowledge of the numbers would allow you to make critical decisions about the future, if you could put them together.”

That idea has stayed with him, from that young age, continuing throughout his banking and finance careers, and still today.

After a stint in the Air Force Reserve in the early 1950s, during which he was called up to Fairchild, Kuharski, who grew up a “poor kid in the south side of Minneapolis,” decided to stay in the Spokane area where he had met his wife-to-be, Patricia.

He went to Kinman Business University, in Spokane. “I was going to be a CPA. I got a lot more money going to work for the bank,” he says.

He started work at Fidelity Mutual Savings Bank in 1953 and quickly moved up the ranks. In 1962, Fidelity President Ed McWilliams created a new title for Kuharski.

“I was the first research director at a major U.S. bank,” he says. “I had to invent the job.”

Part of his job was to provide supporting data to justify new branches. “I branched beyond that to do a total economic analysis and how it affected branches at the bank,” he says.

The Federal Home Loan Bank, which provided a line of credit for Fidelity Mutual, was interested in the health of the Spokane-area real estate market, for which Kuharski began to gather data.

From that research evolved the report known today as the Real Estate Report, a comprehensive data clearinghouse published semiannually by the Spokane-Kootenai Real Estate Research Committee, which Kuharski helped found.

“Dale Strom and I were the architects of the report,” he says. “I insisted on certain benchmarks: public information and unbiased, high-quality proprietary information.”

The first reports were about 30 or 40 pages. Today, it’s a 300-page report that covers Spokane, Kootenai, and Bonner counties. It’s used by hundreds of people connected to the Inland Northwest real estate and related markets.

Strom, who was then a planner with the city of Spokane, now is administrative officer for the committee.

“We started in 1977 to try to give the organization permanence,” Strom says. “The two of us signed incorporation papers to convert it from a voluntary committee into a corporation in 1981.”

He describes Kuharski as brilliant with a clear vision of the future.

“Phil had a lot to do with bringing stability to the organization,” he says.

Kuharski followed national indicators closely and brought some of those concepts into the report, Strom says.

“Phil always did all the economic stuff,” he says.

Sometimes, Kuharski’s view of the world was a bit more conservative than another analysts on the committee.

“There would be some entertaining discussions … that were intellectually driven,” Strom says. “When Phil starts talking, everybody listens.”

Rob Higgins, executive vice president of the Spokane Association of Realtors, recalls Kuharski’s emphasis on building the report on a foundation of unbiased information.

“It was always data, data, data. He strove to keep it clean,” Higgins says. “It’s reliable information to go to when making decisions in the real estate community.”

Higgins, who served four terms on the Spokane City Council, says Kuharski was an important resource. “As a city council member back to the 1980s, if you wanted to get a good source on real estate and financial markets, you talked to Kuharski,” he says.

“In my work at the bank, I developed a whole lot of electronic funds transfer technology,” he says.

Kuharski says he was one of the original architects of shared ATM networks, point of sale devices, and the debit card.

Fidelity, like all mutual savings banks at the time, wasn’t authorized to offer and service credit cards.

“The boss wanted us to be in that world, and I figured out the only way we could do it was to create a debit card that goes up against the savings account,” he says.

His concept of a shared credit card network was picked up by Bank of America and that bank’s card eventually evolved into the Visa card.

He takes a card out of his wallet and points to the Visa logo on the lower right corner, which he calls a “bug” and claims, “Now every Visa card you see that has a bug on it, that was an idea that came out of Bank of America, but was suggested by Phil Kuharski. That’s a shared network. Sooner or later, Master Charge copied it.”

At Fidelity Mutual, McWilliams also recognized that the bank could profit from sharing some of the technology that Kuharski helped develop.

“I knew many people in finance, so I went to work with Prudential-Bache Securities,” he says. “Right away I did a whole lot better in the securities business than I would have done in the banking business.”

He adds, “I continued doing my economic research and real estate research even while I was working at Prudential-Bache.”

Kuharski worked 15 years at Prudential-Bach before retiring, although he never stopped working with numbers.

“I’m not totally retired,” he says.

At 88 years old, and now reliant on a walker to move around his duplex unit in the Touchmark community on the South Hill, he still has a business license and operates PK Consulting, through which he’ll work on 40 tax returns this year.

He has participated in many government advisory committees and has been a director on scores of boards throughout the community, including United Way of Spokane, the Sister Peter Claver foundation, and the Fairmont Memorial Association.

Although he says he misses terribly his wife Patricia, who died in 2016, he keeps himself occupied.

“I enjoy keeping my mind busy,” he says.

“I still have a number of customers who call me up and ask me my opinion. I’ve been doing a lot of handholding this week,” he adds referring to recent coronavirus-related stock market volatility.