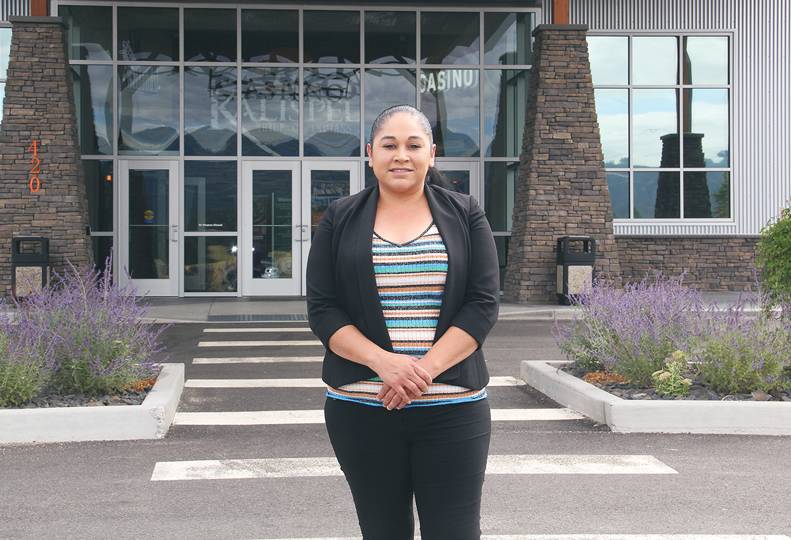 Alia Russell says she was led to her current position of casino operations manager at the Kalispel Casino, in Cusick, Washington, by her desire to be involved at the beginning of something new.

The 38-year-old member of the Kalispel Tribe says laying the blueprints for operation of the casino, about an hour’s drive north of Spokane, has only fueled her desire to find opportunities for innovation and growth.

Russell was born and raised in Spokane. She graduated from Shadle Park High School in 2000, and met her husband, Danny, two years later. At the time, she was a slot attendant, her first position at the Kalispel Tribe’s Northern Quest Resort & Casino in Airway Heights. A few years later, she went back to school and earned her associate degree in business management at Spokane Falls Community College.

Between 2011 and 2015, Russell and her husband had three children, Russell had partially completed a bachelor’s degree in business management at Whitworth, and had moved the family to Austin, Texas. While in Texas, Russell attended St. Edward’s University, and changed her major to entrepreneurship.

In 2015, Russell graduated with her bachelor’s degree, and started thinking about returning to her hometown.

“I’d taken advantage of all the opportunities the tribe has given us,” Russell says. “They help us pay for our education. They really encourage our tribal members to grow professionally, either through the organization, or through academics and education. I came back because I felt that I owed it to the tribe — they’ve invested so much in me, and I wanted to give back.”

She brought her family back to Spokane, where she became a casino host at Northern Quest, and was soon promoted to executive host, a role that hadn’t existed before.

But Russell says she was beginning to feel burned out around 2016 by the high-engagement executive host position. As she watched the casino expand with a new RV park, retail store, and movie theater and restaurant, she saw opportunities to get involved.

“I thought, there’s my chance for entrepreneurship,” she says. “It’s a brand-new business. I can really apply the things I’ve learned in hospitality as well as incorporate my education, and be a part of this.”

General manager Nick Pierre caught wind of Russell’s desire to be part of building something, and offered her the job of managing the casino in Cusick, which had not yet been built. In 2018, she left the host team, moved her family to nearby Newport, and started planning the Kalispel Casino.

The casino and adjoining restaurant, called Wetlands, officially opened on April 8, 2019. Since then, Russell has had a hand in every aspect of the Kalispel Casino and the restaurant, from overseeing the budget to working as a cashier. She currently oversees about 50 employees.

“The truest thing I could say about Alia is she is a humble leader who seeks collaboration in all things,” Miller says. “She contributes to all causes with her ideas and is an active learner on all teams.”

Miller says Russell excels at driving profitability while responding to the concerns of both guests and employees.

Russell says her vision for the future of the casino is one of sustainable growth.

“My goal is to take everything that has made Northern Quest so successful, implement it here at Kalispel Casino, and let the team know that they have the support that they need to be successful themselves,” Russell says. “Even if we stay a small property, that’s fine, as long as there’s consistency.”