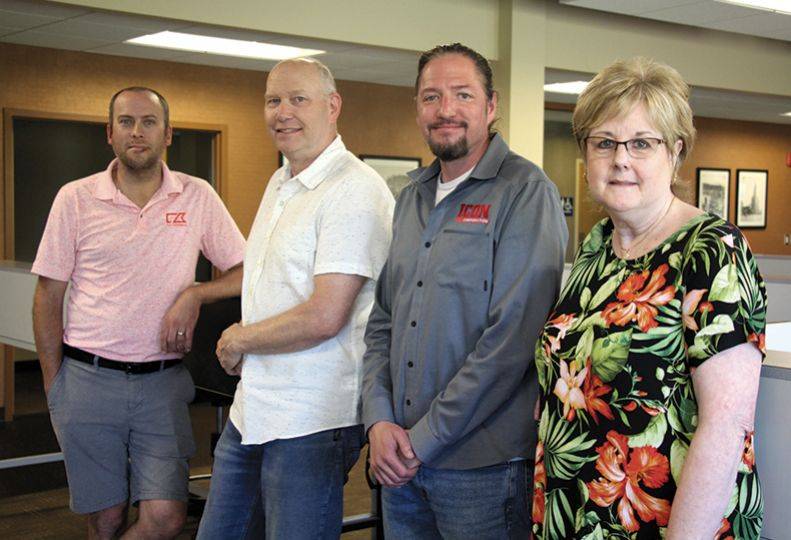 The Spokane Regional Plan Center has been providing access to commercial construction project documents to members for nearly 80 years, and the nonprofit membership organization’s leaders say its services are in higher demand than ever.

However, she cautions, “If we have an early winter, that could change things.”

Heldenbrand says about 375 projects currently out to bid were listed through the plan center as of the end of June.

“It’s all in one location, easily formatted, to make (members’) jobs easier and to provide them with accurate, timely data,” Heldenbrand says. “What our members need is the project information. They need to know what jobs are bidding. They need to know everything they can about it.”

Founded in 1945 as the Spokane Construction Council, the organization provides services and tools such as a regularly updated list of projects currently out for bid, search capabilities of building specification plans, project detail pages, and information for apparent low-bid results.

“If we go back to the beginning of my career 15 or 16 years ago, most architects or owners had hard documents, meaning physical plan sheets and printed specification manuals,” Ham says. “The plan center is a place we can visit physically—or now, online—to view project documents for projects that are coming out to bid.”

Ham says that since documents have transitioned to digital formats, the plan center has been able to keep its members informed better.

“A pivotal part of the plan center … is the speed and the ability to have the most current set of documents, with all the current addendums, and notifications when those are posted so that a contractor or subcontractors don’t bid errors on a project by not having all the proper information,” Ham says.

Heldenbrand says efficiency is important for the members the organization serves, about 98% of whom are bidding companies.

“Accuracy and timeliness are imperative … they’re under huge time constraints,” Heldenbrand says. “We send out nightly emails to our members to let them know every new project that came in the day before.”

Members also can track an individual project via email updates, so they’re immediately notified of any changes made to it, she says.

“They’re looking for the best exposure for their projects so that they can get the most competitive bids,” she says.

Anyone can file plans for a commercial project at no cost, she says.

The Spokane Regional Plan Center covers more than the Spokane-Coeur d’Alene metropolitan area. Heldenbrand says the organization covers projects “from the Rockies to the Cascades,” but includes some projects located as far away as northern California.

Heldenbrand, who has worked at the plan center for 27 years, says turnover at the organization is low.

Spokane Regional Plan Center has 793 members, Heldenbrand says. That number has remained fairly steady over the past few years, she says. Membership costs $255 per quarter, with a $25 initiation fee. There are no membership restrictions, Heldenbrand says.

Heldenbrand declines to disclose revenue, but says the plan center is self-supporting. The organization runs entirely on membership fees.

“Our primary members are general contractors, subcontractors, and suppliers,” she says. “We have insurance companies—they find it informative because they need to know what’s bidding relative to bonding. We have some architects and engineers who are members. It keeps them apprised of what’s going on in our industry. It’s a valuable tool for anyone who’s involved in the construction industry.”

Ham says in the days of hard copies, when he was new to Dupree Building Specialties, he spent most of his days at the plan center.

“I’d look at all the new projects, and I’d highlight any projects that it might be possible to have a product of mine on it,” Ham says. “Then I’d go and pull it out of the bin, put it at the desk, and I’d read the spec manual and take copies of anything we could bid on. I’d spend 90% of my day at the plan center, searching through documents to find things to bid.”

Jack Johnson, board chair of the Spokane Regional Plan Center and president of Spokane-based Icon Roofing Corp., says the plan center streamlines the search process for members, as well as simplifying documents so they’re easier to read.

“You don’t have to go through a thousand pages like you do with some competitors,” Johnson says. “They take the whole packet and turn it into useful information.”

Johnson says that if a potential customer asks to send documents directly to him, he requests that they file the documents with the plan center.

“I don’t want to go through … and miss something, or just be sifting through 1,500 pages of specs,” Johnson says. “And they usually do it, because what does it hurt? They’ll get more bids out of the deal. The more bids you get, the better the price for the customer.”

Heldenbrand says that in recent years, the organization has begun to get involved in filling the construction trades employment pipeline.

“One of the things that our members have been clamoring for the most is for our involvement in the workforce development side of our industry,” she says.

“In the time we’ve been involved with them, we’ve donated $11,000 to help them with the things they need within their construction and welding programs,” she says.

The Spokane Regional Plan Center also has partnered with the technical education institution on events such as construction career days. Members have visited the school, and Heldenbrand says some members have hired students from NEWTech.