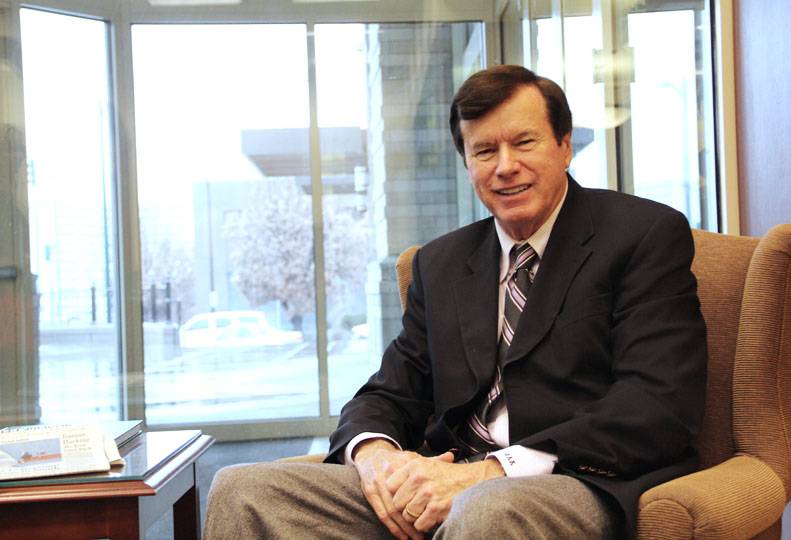 Spokane-based financial institution AmericanWest Bank has experienced an organic loan growth rate of about 10 percent a year for the last two years, which is double the industry standard, claims CEO Scott Kisting.

The bank also has extended a total of $1 billion in credit during each of the last two years, he says.

Organic loan growth refers to loans or credit extended to clients within the bank’s existing footprint, not taking into account growth from acquisitions.

He also attributes the growth to the bank’s expectations of its sales managers.

“A lot of it was just getting our people out in the marketplace,” Kisting says. “We have a very disciplined sales manager program. They’re all expected to have a fairly substantial level of active prospects.”

Kisting also says the bank has a decentralized system when it comes to credit, which can streamline the process.
“Not everything comes to Spokane for a decision,” he says. “Responsiveness is key.”

The bank has almost doubled its branches and employees in the last three years. It’s currently operating 95 branches in five states—Washington, Idaho, Oregon, California, and Utah—and it employs just short of 1,000 people, Kisting says. In early 2011, just after being acquired by a subsidiary of California-based SKBHC Holdings LLC, it was operating 58 branches in Eastern Washington, North Idaho, and Utah, and had about 500 employees.

The bank declines to disclose most of its 2013 year-end numbers, but Kisting says it had about $4 billion in total assets as of earlier this month.

For 2014, Kisting says the bank is aiming for organic loan growth of 8 percent to 10 percent.

“We’re holding ourselves accountable to that,” he says. “I think we’ve got the right momentum to continue to grow.”

However, Kisting says those numbers will be harder to meet this year, as the bank has expanded its operations through acquisitions.

“Ten percent this year is 20 percent harder than 10 percent last year, because we’re growing on a bigger base,” he says. “But I think we’ve got a reasonable shot at double-digit growth.”

In order to meet that growth goal, Kisting says AmericanWest will continue to employ its current sales strategies, focus on customer service, and continue looking for acquisitions.

The bank has made eight acquisitions in the last three years, including branches in southern Oregon and northern California in 2013. Those purchases in particular open up an opportunity to expand the American West’s agricultural lending in those areas, Kisting says, because those branches previously didn’t have strong agricultural presence.

“We’ve acquired some banks that have some rich agricultural areas,” he says.

Kisting says he hopes to continue making acquisitions in 2014, but at this time, the bank has no acquisitions to announce.

Areas of interest for the bank this year include expanding in its existing territories, Kisting says, including Eastern Washington, northern California, and northern Utah.

On the customer-service side, Kisting says the bank has an employee culture known as the “AmericanWest way.”

“We get a lot of referrals from existing customers,” he says. “It’s about being very disciplined about putting the customer at the center of the universe.”

For the 2013 year overall, Kisting says AmericanWest focused on making investments in its future, something he says is made possible by the bank’s private ownership.

“Being private, we don’t have to worry about quarter to quarter earnings,” he says. “We can invest in the future.”

“We invested a lot in training,” he says. “Part of the culture here is investing in people.”

Looking into 2014, Kisting says that, along with loan growth, the bank is looking to grow its entire business.

“Our budget would say we’ll be up substantially in 2014,” he says. “The cost of restructuring is behind us.”

Kisting also is chairman and CEO of SKBHC, which bought and recapitalized AmericanWest in 2010. The company, which was set up specifically to buy troubled banks, had raised about $750 million from investors, and has invested about $458 million so far in AmericanWest, Kisting says.

When Kisting and SKBHC first took over the AmericanWest, they drafted a five- to seven-year plan to grow the bank. AmericanWest is in the third year of the plan, Kisting says, and so far is on track to become a $7 billion to $8 billion institution, in terms of total assets.

Kisting says part of the plan’s success will rest on the bank’s disciplined credit practices.

“Without taking extraordinary risk in banking, two things can really destroy you,” he says. “Taking interest risk or taking credit risk. Today, you have to be careful you don’t stretch your credit discipline. And if our credit standards are going to be high, we need to look at twice the opportunities as some whose credit standards aren’t as high.”