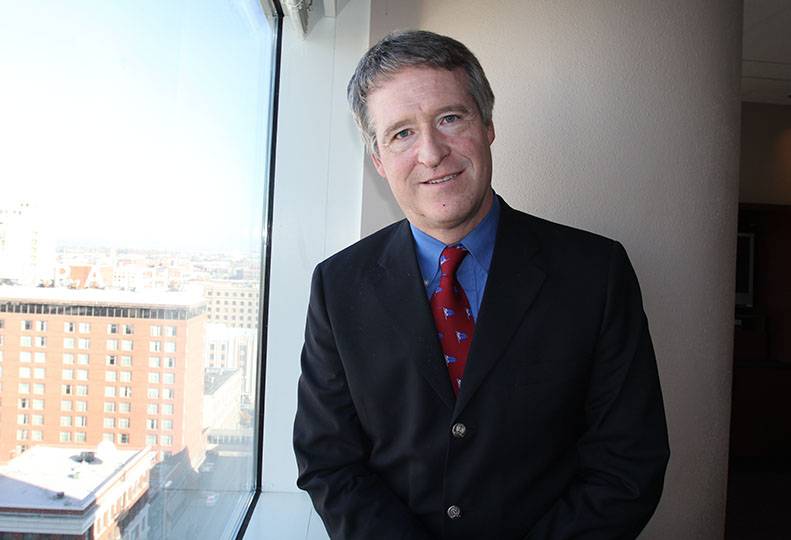 -—Staff photo by Treva Lind
Spokane attorney Keith Grzelak travels often to Washington, D.C., to serve in a volunteer position for the Institute of Electrical and Electronics Engineers-USA.

While Spokane attorney Keith Grzelak represents engineers and inventors here on intellectual property legal matters, he also plays a national role in support of these professionals for the Institute of Electrical and Electronics Engineers-USA.

As the group's vice president of government relations, Grzelak in that volunteer position travels at least 12 times a year to Washington, D.C., where IEEE-USA is based. The membership group supports career and public policy interests of 235,000 engineering, computing, and technology professionals.

Grzelak often attends meetings on Capitol Hill. He also provides input on IEEE's position on federal policy matters, such as on patent law changes, and regarding national debate affecting U.S. technology innovation. He also is a candidate among others to become the group's president in 2015.

"Engineers and scientists usually don't like to deal with politics," Grzelak says, adding that IEEE strives to provide that voice for them. "I'm an attorney, but I'm also an engineer and an inventor."

His nod to the latter professions stems from his work for more than five years, until 1990, as a safety and crash worthiness engineer at General Motors Co. and then Ford Motor Co., doing engineering design and tests on vehicle- and occupant-crash impacts.

Today, he works exclusively as an attorney and director at the Spokane-based Wells St. John PS law firm.

"You've seen the crash dummies with sensors on TV commercials; I worked with those," he says. "General Motors and Ford put me through law school. I practice now as an attorney, but most of my clients understand I'm also an engineer."

He says he is active with IEEE nationally because it provides a venue for advocating on behalf of science and technology professionals regarding actions and funding by Congress, and sometimes regarding cases that may go before the U.S. Supreme Court.

Grzelak adds, "I'm a part of a volunteer organization, with a staff of roughly 17 in Washington, D.C. They give me a vehicle to go on Capitol Hill, such as if we see patent reform, immigration policy, and educational funding issues. Even though it's a hobby, I'm in pretty deep."

Grzelak says some issues affecting professionals in the group here and nationally include ongoing plans to change patent law, immigration policies that affect foreign high-tech workers in the U.S., and funding for science, technology, engineering, and math (STEM) education.

In Spokane, the IEEE chapter has more than 200 members and this year celebrates its 100-year anniversary. Grzelak has been an IEEE member since around 1992 and joined the Spokane chapter shortly after he moved here in 1995 to practice law.

In 1983, he earned a mechanical engineering degree from Michigan Technological University, where he also received a master's degree in engineering mechanics with biomechanics thesis. He received a law degree in 1990 from Detroit College of Law, now Michigan State Law School.

In the early 1990s, after earning his law degree, he finished a master's degree in electrical engineering with a specialty in bioinstrumentation from Wayne State University.

As an attorney in Spokane, Grzelak says he has represented startup companies here that provide new technologies, as well as established, mid-sized technology companies.

Grzelak notes that some technology-driven employers have departed Spokane in recent years, such as Itronix Corp., a manufacturer of rugged computers that was bought by General Dynamics, of Falls Church, Va. Such moves often lead to a loss of engineers and high-tech workers, he says.

However, some professionals originally brought here by those companies have remained and are doing consulting work or tinkering with inventions and startup companies, Grzelak says. Such enterprises can help grow the economy here, he adds.

"It's important for Spokane that we have a technology community," he says. "I hope someone I represent locally will hit it big. It's just a challenge to build a technology company, grow it, and protect its intellectual property."

He contends that action and dialogue at the federal level are crucial to address concerns affecting Spokane-area engineers and inventors, as well as those professionals across the nation.

"As part of IEEE, we can meet with congressional staff counsel or congressional representatives," he says. "What we bring to the table is the largest resource of technology and science professionals in the world."

As one example, Grzelak says IEEE-USA supports public policy for better recruitment and salary compensation of U.S. and foreign-born high-tech workers so that the nation can remain competitive. In tech industries, workforce and marketplace competition is global, he adds.

He says some politicians want to increase the number of foreign guest workers who are doctors, scientists, and engineers to come to the U.S. under temporary work visas.

Instead, IEEE supports offering permanent, employment-based visas for them with pathways to citizenship.

"There's a push to allow companies to bring in more guest workers from other countries for technology jobs, but with that, you can't change your job, you can't bring your spouse here, and you can't start companies," Grzelak says. "You are held hostage to your employer."

He adds, "We have some of the best universities in the world for science and technology. If you bring the best and brightest here from around the world, why not make them citizens? Some of them can help create new companies and industries."

The patent reform already passed and that became effective in March caused inventors to adjust from a first-to-invent system to a first-to-file system, meaning people who file a patent first will have rights to the idea, regardless of who first conceived it.

Previously, startup companies and individual inventors with limited capital often tested marketability of ideas for a period of time before filing for a patent.

Grzelak adds, "Now, there are eight more bills in Congress mainly on patent litigation and further changing patent law. We (IEEE members) are being approached for our views."

He says as another example of work at the national level, IEEE-USA this month filed a U.S. Supreme Court brief seeking review of the patentability of software because of legal questions about whether it is a patentable subject matter.

"The problem is the law is unclear," he says. "If they're not considered patentable, professionals might not work on solving problems. They make huge investments of time and money, so why do research and development for three years, and a big company can take the idea?"

He says IEEE plays a number of other roles, including publishing scholarly articles and establishing technology standards for different industries, such as the current standard for a wireless router.

The group also holds educational seminars and is active on university campuses.

Grzelak adds, "Any IEEE member in Spokane can get involved. IEEE is a great venue to address concerns that engineers and inventors face."