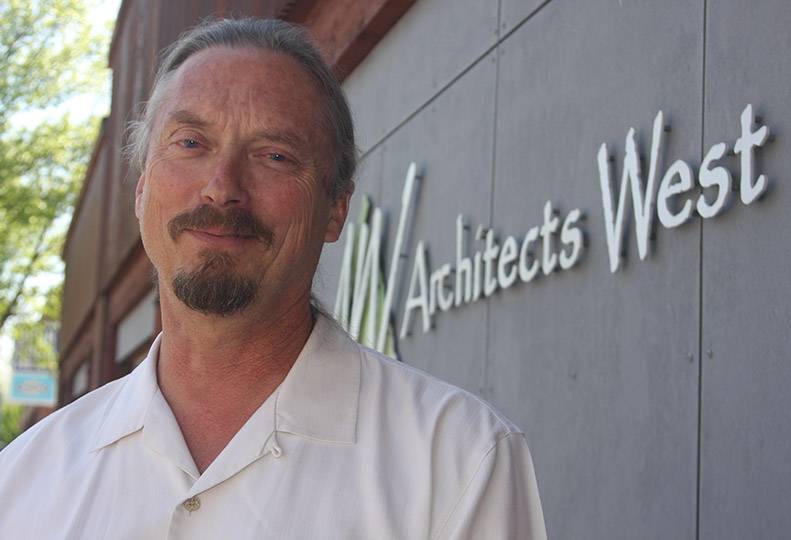 Meanwhile, the firm, which is celebrating its 40th year in operation and has seen revenue increase so far this year, is in the process of becoming employee owned, a process that started in the late 2000, Jester says.

Architects West operates out of a 4,500-square-foot single-story office building at 210 E. Lakeside in downtown Coeur d'Alene that was built in the 1930s as an automotive dealership. The firm has operated in Coeur d'Alene since its founding in 1973, Jester says.

Jester says Architects West is currently up 10 percent in revenue compared with last year at this time, and expects to be up 15 percent by the end of the year compared with 2012.

Architects West handles projects throughout the Northwest and Montana, with a majority of its work taking place in Washington and Idaho, he says.

Of the design work it has garnered, 70 percent is education related, and the other 30 percent is a mix of commercial, residential, multifamily, and health care projects, among others, he says. Jester attributes the increased activity the firm is seeing in technical school and skill center projects to a rise in the number of people seeking out technical education opportunities to increase their quality of life and the types of job they can get.

"Like any other professional service firm, we go with the ebb and flow of the economy," Jester says, adding clients' wants also have shifted.

Last year, the firm designed the Southeast Area Technical Skills Center, a 35,000-square-foot facility in Walla Walla that currently is under construction and expected to cost $8.3 million to build. Also last year, the firm designed a $1.8 million remodel of a 51,500-square-foot former retail space at 115 S. University in Spokane Valley to accommodate the NewTech Skill Center, called Spokane Valley Tech.

Other education projects the firm has worked on include Post Falls High School, a 195,000-square-foot building that cost almost $16 million to construct in 2000. It also completed design work on a $5.6 million expansion and modernization of Nine Mile Falls Elementary School in 2009. Farther out within the Inland Northwest, Architects West designed a $35 million expansion and renovation at Wapato High School in Wapato, Wash., in 2011. Work included adding a gym, commercial kitchen, and classroom space, along with remodeling 50,000 square feet of existing space.

Jester says he's seeing demand pick up for low-maintenance, energy-efficient designs, or high-performance construction as Jester refers to it.

"That's what a lot of our clients ask for, and we hope to do good architecture in the process," he says.

Jester says the firm typically works on between 35 and 40 design projects a year, including those handled by its smaller branch, Landmark Landscape Architects.

That division of Architects West has been in existence since 1983. A team of dedicated landscape architects work on planning and landscape design for the firm. Jester says Landmark also works on its own landscape design projects not associated with the larger firm.

"Land planning, site development, and landscape architecture are key components to all project types, and having that in-house allows us to collaborate closely, and offer a full service to our clients," Jester says.

On the Architects West side, the firm has 24 full-time and two part-time employees. Of that, Jester says nine are licensed architects, with the rest on staff working as technical support or administrative and front office support.

The size of Architects West's workforce has remained relatively the same for the last decade, he says, adding future hiring is dependent on demand for services and the economy.

"We're open to growth, but we're not actively pursuing it," Jester says.

Architects West is in the process of transitioning from a partnership to an employee stock ownership plan, Jester says. The plan will enable it to be an employee-owned firm. The process, which started in 2008, will be completed in a few years, he says.

"We wanted this to be a benefit for those that worked here, not just those that owned the firm," Jester says. "They could see a future here, and they could build a career here."

Jester says Architects West's location outside of Spokane hasn't posed much of a hindrance for the firm in garnering design contracts.

"Spokane supports its business community," Jester says, adding that the firm has completed some design work within the city, but has managed to stay busy with contracts elsewhere in Eastern Washington, and in Idaho and other states.

"If you get specialized, that's all you do," Jester says. "Diversity is important to us, and we'll continue to foster these things."

Jester says although the firm takes pride in design work it has done on various projects in Coeur d'Alene, such as the 37,000-square-foot Coeur d'Alene Public Library, at 702 E. Front, and the 123,000-square-foot Salvation Army Ray & Joan Kroc Corps Community Center, at 1765 W. Golf Course Road.

"We have a heart for this city and this community," Jester says, adding that it's in negotiations for work on additional Coeur d'Alene projects that he's not yet able to discuss.