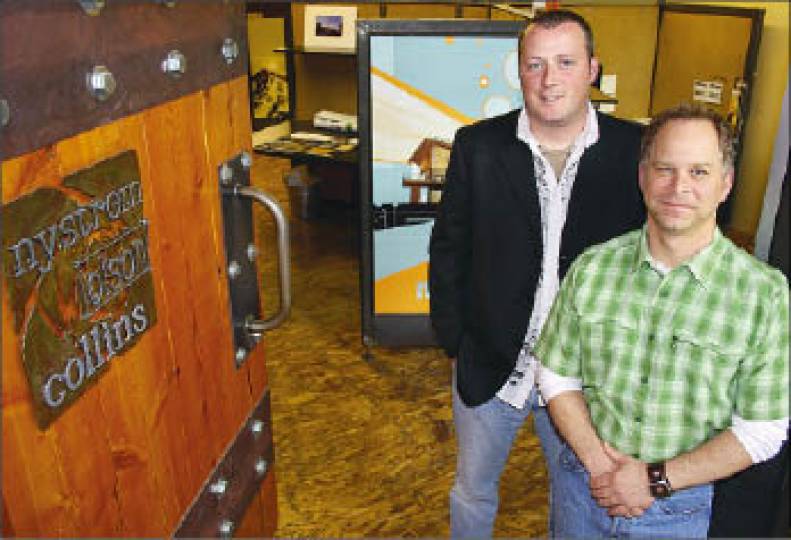 -—Staff photo by Jeanne Gustafson
Chris Olson, left, and Sam Nystrom say they've worked to make their firm lean and to adapt, while retaining staff members through the down economy.

Nystrom Olson Collins Inc., a young architectural firm here, says it's looking to boost its presence in the market by getting into development projects, is taking steps to become leaner amid the poor economy, and plans soon to change its name after the departure of one of its principals.

The firm, which was launched by Sam Nystrom and Chris Olson in 2005, will return to its original name, Nystrom Olson Inc., within the next couple of months because partner Matthew Collins, who joined the firm late in 2005, has left to start his own firm, Olson says.

The company, which works on a mix of commercial, medical, and custom residential projects, now has eight employees, including the two current principals, another architect, and five support staff members, he says.

To expand its presence, the firm is preparing to branch out into what Olson calls selective development projects. In a pilot project, Olson took on the financial responsibility for the first such development, a two-duplex project recently completed in the Peaceful Valley neighborhood, on his own, he says. In that project, Olson served as developer, and Nystrom Olson did the design work. Olson served as the general contractor, and he will continue to own the property.

Development work is a departure for Olson, who cut his teeth as a draftsman at Avista Corp. and currently is taking exams to get his credentials as an architect. He will take the lead for Nystrom & Olson on development projects, through an affiliated company the two partners plan to form soon. Olson says he thinks it will add depth to what he brings to the firm.

"It makes me better at what I do here," he says, adding that he now has a greater understanding of the opportunities and costs developers face in bringing a designed project to fruition.

Also, the firm recently won an Agora award for business excellence in the medium-size business category of the annual awards program sponsored by Greater Spokane Inc.

"That was very exciting for us," Nystrom says. "After five years it's nice to have that public recognition from peers and the community."

The young firm has done projects that Nystrom and Olson believe have helped define its style.

In their designs, they favor steel, glass, and wood, including reclaimed wood, Nystrom says, adding that they juxtapose industrial materials with clean, sleek, state-of-the-art technology and materials.

"We're trying to bring a modern sensibility to the built environment," he says.

The firm takes on a variety of types of projects, including commercial, office, and retail structures. Among its recent designs have been the newly opened Flying Goat restaurant developed by Spokane-based Stejer Development Inc. and the owners of the Downriver Grill here; the former Rodeway Hotel remodel and the planned Burgan's Block project, both being developed by GVD Inc.; and such medical projects as the redesign of Providence Sacred Heart Medical Center & Children's Hospital's pharmacy and the St. Luke's Rehabilitation Institute's Community project, a rehabilitation center that will simulate a community environment, which currently is under construction.

"We hope that our designs are a reflection of a building's program and function first," but the firm's ideology is that a functional design also can be a nice piece of architecture, Nystrom says.

Despite a down economy, which has resulted in a dip of about 20 percent in revenues compared with a couple of years ago, the firm has retained its staff members and is growing, Nystrom says. In the process, though, the firm has had to try to become leaner, he says.

"We've tightened our belt, but our goal is to keep our team together, to be prepared, and to be ready for the economy to loosen up," he says.

To become leaner, the firm has become more hands-on, doing its own interior space planning for projects rather than subcontracting that work, he says.

"We're still busy, but it's a different kind of work now," Olson says. He says the firm now focuses more on remodeling and redeveloping structures, which he says poses interesting challenges in trying to design projects that will meet the needs of the client.

Despite the challenges stemming from the economy, Nystrom and Olson both say they are optimistic about the firm's outlook.

"The cork is about to blow off," Olson says.

The firm, says Nystrom, has a lot of clients who actually are moving forward on commercial projects right now, and it is doing multiple projects for a number of its clients.

"We're very excited about where we sit with our projects right now," he says.

The partners built their business from the ground up. Both had worked for other employers. Olson, originally from Thompson Falls, Mont., and Nystrom, a Medical Lake native, met when both were working at Denny Christenson & Associates. Nystrom graduated from Washington State University and also studied at Polytechnic of Central London, while Olson has learned the trade on the job. But they were excited to start their own firm "from zero," Olson says.

"We wanted to bring something fresh and new to the design community," Nystrom says.

They launched the company in the basement of Olson's Spokane home, later leasing space at the Flour Mill, on the north bank of the Spokane River near downtown.

About a year ago, the firm leased its current office at 912 W. Sprague, and remodeled the interior.

"We needed more space, and liked the idea of being in the arts district," Nystrom says of that area of downtown. He says the firm hosts local artists to participate in Spokane's First Friday art walks, and in the summer opens wide the large glass garage door at the front of its office on Sprague to get in the spirit of the event.