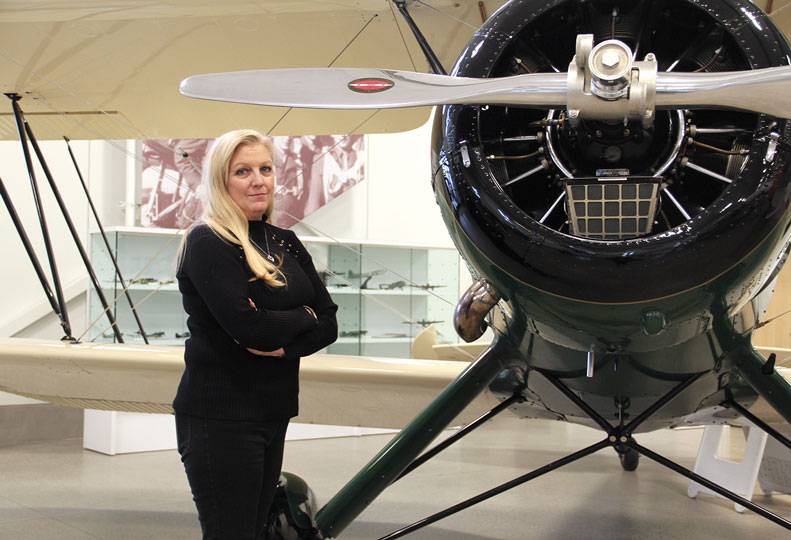 After being grounded for most of a year, the Historic Flight Foundation is ready to ascend into Spokane’s events scene again.

Sheila Geraghty, executive director of the Historic Flight Foundation, says that the facility is reopening to the public under the second phase of Washington Gov. Jay Inslee’s Roadmap to Recovery plan. Winter hours are 10 a.m. to 4 p.m., Thursday through Sunday.

The Historic Flight Foundation is a nonprofit vintage aircraft museum located in a hangar at Felts Field, at 5829 E. Rutter, that doubles as an events venue.

Fourteen vintage aircraft gleam under the hangar lights of the museum. Many of the aircraft were used in combat, including some that flew in World War II. The headgear many pilots would have worn while flying is displayed on one side of the hangar, along with scale models of combat aircraft.

The Historic Flight Foundation’s hangar is able to hold larger events under the second phase, Geraghty says. The first event to take place under the newer, and looser, restrictions will be a wedding in late February. Two other weddings are scheduled to occur within the next few months, she says.

Typically, the Historic Flight Foundation hangar can host up to 600 people. Under current restrictions, capacity is limited to 150 people.

“I had 10 weddings scheduled for last summer, and they all moved to this year,” Geraghty says. “I feel bad for these brides. I think a lot of the brides have already gotten married in a private ceremony, and then they’re just going to have the reception here, or a reenactment of their ceremony.”

Geraghty says the 21,000-square-foot museum hangar attracts airplane enthusiasts of all ages. However, COVID-19-related state restrictions on event venues and museums meant that for most of 2020, the museum was closed to the public, and several events were cancelled or postponed.

Geraghty says that under the first phase of the Roadmap to Recovery, the venue could have hosted a wedding only because its large hangar doors can be opened for increased ventilation. Under Phase 2, however, some safety measures of Phase 1 remain: Guests can’t dance, sing, or mingle with people from outside of their household.

Geraghty says the foundation has a handful of other events planned for the coming months.

“We are starting up our lecture series again, which was hugely popular last year,” she says. “We have guest speakers who come in and do the same presentation Friday night and again Saturday morning. That would (typically) bring in hundreds of people here to listen to the history of flying.”

The lecture series kicks off March 19 with a lecture on Cessna aircraft.

Geraghty says the facility is also a science, technology, engineering, and mathematics education center, and classroom and conference rooms can be rented separately from the main hangar space.

“Science, technology, engineering, and math are all part of flying and how planes work,” Geraghty says. “We all know that kids are struggling at home. When I met with high school leaders last week, they said the kids need something different. They need to see a plane fly. They need to see something fun.”

For more than a decade, the Historic Flight Foundation’s original location was at Paine Field, in Everett, Washington. Geraghty says that while the Felts Field hangar was under construction in 2019, the primary use for Paine Field changed.

“That airport went 100% commercial, so we weren’t able to take the planes out and fly them or have festivals, and that’s what we’re all about,” Geraghty says. “There was no reason for us to stay there, because all of these planes fly, and if we can’t open up the hangar doors and take them out and fly them, there’s no sense in being there.”

Spokane International Airport, which owns Felts Field, built the hangar in mid-2019. The facility opened on Dec. 17, 2019, the 116th anniversary of the Wright Brothers’ first flight in a powered aircraft.

Then the museum at Paine Field closed, and the process of moving the entire collection to Spokane began. When Geraghty became executive director in March 2020, the hangar at Felts Field housed five planes.

Geraghty says it took some maneuvering to get the additional planes into the hangar, and not all of them were able to fit.

“The DC-3 has had to be outside since June, which is too bad -- it suffered some severe damage during the windstorm in January,” she says.

All of the planes are airworthy, Geraghty says, and seven can take passengers. The Historic Flight Foundation offers flights for $250 to $600, depending on the aircraft. Timing of the flights is contingent on weather.

“If we know the weather is going to be good, we call all the people that have purchased flights in our planes,” Geraghty says.

The organization’s Gift of Flight program was popular over the winter holiday season, Geraghty says.

“Thank goodness for Christmas,” Geraghty says. “We sold about 20 of (the Gift of Flight tickets), which sustained us financially through December and January.”

The Historic Flight Foundation contracts with four pilots, one of whom lives in Arizona year-round, while the others are Spokane-area residents.

Geraghty is the only Historic Flight Foundation employee, although about 80 volunteers “do almost everything” to help her run the museum.

“They’re the ones who clean, who dust the planes,” she says. “They man the front desk when we’re open.”

Geraghty says that before she was hired, all operations at the Historic Flight Foundation were run by volunteers.

Most volunteers are either retired former aerospace employees or military veterans. Geraghty says she hopes to recruit younger volunteers, though that could be a challenge.

“We’re located at an airport that has two different flight schools, and Spokane Community College also has a wonderful aviation department at a hangar here,” Geraghty says.

However, recruiting students to help with the museum has been challenging. “If they have free time, they’re probably not going to be volunteering, because they’re going to school from 7:30 to 4:30 five days a week,” she says.

Like many other events facilities, the Historic Flight Foundation struggled through 2020. The facility closed to the public on March 15, and except for a few weeks in autumn, it stayed shuttered.

However, Geraghty says the museum made the most of its outdoor space through events such as three tarmac tours held last summer.

“We opened the hangar doors all the way and we got permission from the airport so that people could drive their cars out on the tarmac … in front of all the planes.” she says. “They could stay as long as they wanted. Our roll-up door was open, and we had our retail carts out there selling T-shirts and souvenirs.”

The foundation held a few other events, some online -- such as its October fundraising gala -- and some in the open air. The public was invited to watch from the facility’s parking lots on July 4 when five combat aircraft flew over Eastern Washington and landed at Felts Field to refuel before continuing to North Idaho.

“Both parking lots were packed, and kids were standing on the fence to get a good view,” Geraghty says. “It was so great to see all of these people coming to see these vintage planes landing here at Felts Field.”