New substation intended to increase efficiency in distribution to city 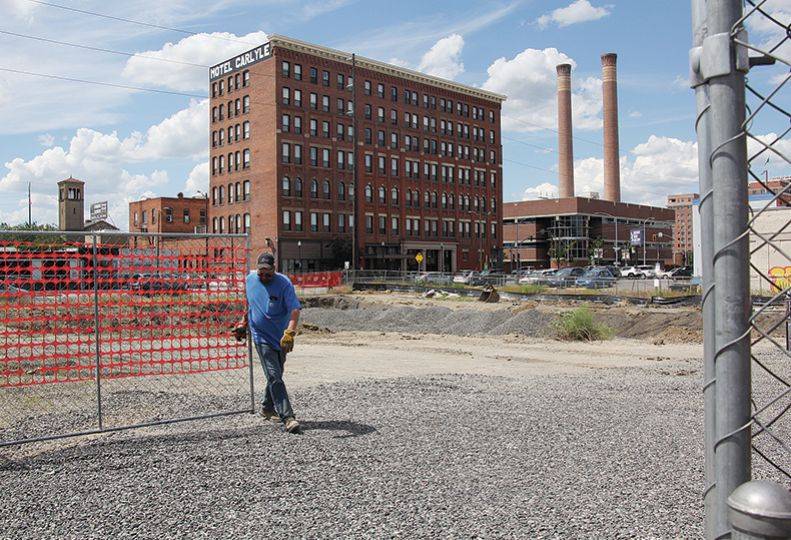 With an ever-increasing customer demand for electricity, Spokane-based Avista Corp. is updating and modernizing the electrical grid that powers the city, says Heather Rosentrater, of Avista.

Rostentrater is senior vice president of energy delivery and shared services and has been leading the grid modernization efforts made by Avista for the last 15 years, she says.

“We have a significant responsibility to provide energy to our customers. We know that’s an essential service and our customers want it to be reliable, clean, and sustainable,” Rosentrater says. “They need it to be affordable as well.”

Rosentrater says Avista is making investments to update the electrical grid for its customers both through energy generation and through infrastructure improvements.

“There’s a lot of work going on to identify new infrastructure,” she says. “Those are usually identified based on growth in an area or asset conditions.”

Avista’s infrastructure modernization projects usually aren’t easily visible, however a new $4.5 million open-air substation is planned downtown at a nearly 1-acre site Avista owns bordered by Third Avenue to the south, Post Street to the west, and Wall Street to the east. The site previously was home to a Domino’s Pizza outlet, a convenience store, and surface parking.

Rosentrater says the project’s timing was based on asset conditions.

“The downtown area in general has a long life. It was one of the first areas built up in Spokane, so the standards that the previous substation was built under have changed over time,” she says. “We’re finding it important to rebuild that station in our current standards.”

The city’s current energy needs require a bigger footprint for the substation, she says.

“It will have updated communication, updated protection devices, and will operate even more quickly with automation of those circuits.”

The 39,100-square-foot substation will transmit and distribute electricity to homes and businesses in the downtown and lower South Hill areas.

The project will increase energy efficiency through automated voltage regulation and switches to isolate and restore energy from a power outage.

“What used to take hours will take minutes because of these upgrades to our system,” Rosentrater says.

A contractor hasn’t been selected yet, according to permit information on file with the city of Spokane.

Grading and site work has already begun, and the project is anticipated to be completed next summer, permit data shows.

An existing substation located at 158 S. Post, adjacent to the Steam Plant Square complex, will be decommissioned once the new substation is completed.

Rosentrater says Avista also recently has completed another infrastructure improvement project that started about 10 years ago, with the installation of smart meters in Washington state.

“As loads change seasonally, we can now switch loads around from one circuit to another that might be more heavily loaded in the summer to another that’s less loaded,” she says. “Having that additional visibility at the meter level … helps us to balance out the system, improving grid efficiency.”

In the South Landing area of the University District, the development arm of Avista has created an eco-district that includes the Scott Morris Center for Energy Innovation and the Catalyst Building. Two future buildings also are envisioned in the eco-district.

The Scott Morris Center’s central heating, cooling, and electrical systems support its own energy needs as well as those of the Catalyst building.

Avista is able to influence when those buildings use energy from thermal storage onsite by preheating or pre-cooling that storage, which allows the building’s peak energy usage to be offset from the grid’s peak energy use.

In the Scott Morris Center, Avista also has partnered with energy companies to create an energy lab that allows for grid simulation tests that help prepare the system for wildfire resiliency.

“We’re able to simulate those conditions in the lab before we apply those changes on our system,” she says.

She explains one of Avista’s areas of focus for grid modernization is wildfire resiliency through grid hardening.

Hardening involves changing transmission poles from wood to steel and changing out the wood cross arms to fiberglass and includes automating more of the system, she explains.

Rosentrater says grid modernization will evolve continually as it’s an ongoing effort, and the cost of replacing older infrastructure is a challenge as prices increase, which puts pressure on customers’ rates and bills.

Improvements to the electrical grid are paid for with federal and state grants including from the American Recovery and Reinvestment Act and from the Washington state Department of Commerce in addition to rate increases.

“We’re watching the federal infrastructure funding that’s being rolled out, and it seems to be some opportunity to potentially apply for support through that, that could help offset those impacts to customers,” she says. “We’ve received a Smart Grid Grant in Spokane, a smart city grant as part of a consortium in the region in Pullman, and we were a part of a workforce training grant in the region.”

A greater number of people are using a larger amount of energy in their daily lives, which has put a strain on electrical grid infrastructure that was installed about 50 years ago, she says.

Balancing that growing demand for energy with sustainability and affordability is a constant challenge for the utility company to meet.

“Some customers rely on electricity at their homes for transportation and as they get electric vehicles,” she says. “They have a different expectation for reliability, energy, and even their relationship with us as the utility provider.”

Customers can now generate power at their homes with solar panels, and that also changes the way customers can engage with Avista and the grid itself, she explains.

“We’ll continue to see technology advance, and what wasn’t cost-effective five years ago may become cost-effective,” Rosentrater says. “We’re testing and piloting different things to execute when those kinds of things become viable.”