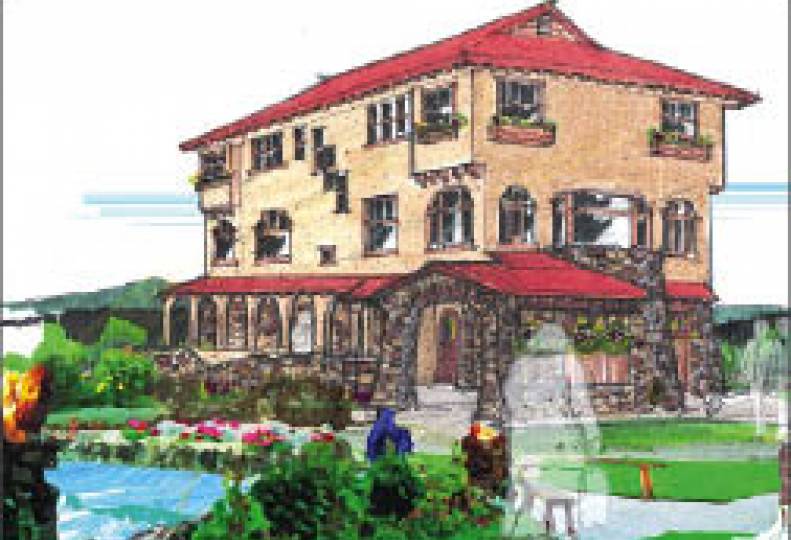 -—Rendering courtesy of Blue Room Architecture & Design PS
The Arbor Crest Winery Cliff House will be rebuilt as closely as possible to the original.

How do you re-create a historical mansion that's been gutted by fire when no blueprints exist and you can't enter the condemned structure? That was the problem facing Blue Room Architecture & Design PS when it was hired to design the restoration of Arbor Crest Winery's Cliff House.

Blue Room's principal architect, John McLean, says a structural engineer evaluated the remains of the mansion, which was severely damaged by a fire on Dec. 23, and determined it was no longer structurally sound.

Plans call for completely removing the second and third floors of the 3,400-square-foot Florentine-style mansion, while preserving the first floor stonework, porches, and porte-cochere, or carport. The project is scheduled to begin about July 1.

Arbor Crest owners Harold and Marcia Mielke determined that the Cliff House, an icon of the winery, should be restored as closely as possible to its original state. Also called the Riblet Mansion, the home was built by Royal Riblet in 1924, and was placed on the National Register of Historic Places in 1979. The structure, widely visible from Spokane Valley, is located on Fruit Hill Road on a cliff above Upriver Drive.

McLean began devising a blueprint for the new Cliff House by photographing the mansion from the outside and taking measurements of what remained with a laser measuring device. Blue Room also did historical research and conducted interviews as it worked on the new plans.

"Several people who had known the house spoke to its original configuration," McLean says. "Our goal at the end of the project is to see no difference in the physical structure."

Arbor Crest General Manager Jim van Loben Sels says the winery's insurance coverage from the fire will cover $600,000 in construction costs. With upgrades required by the Spokane Valley Fire Department, including the cost of building a fire access road to the Cliff House, he expects the total cost of the project to run up to $1 million. The access road will necessitate removal of some vineyard area.

Materials used in the original construction of the mansion are still readily available. All salvageable original woodwork and roof tiles will be cleaned, stored, and reinstalled as work progresses, McLean says.

McLean says Kop Construction Co., of Spokane, the general contractor for the project, has experience with historical preservation work. He says Spokane-area craftsmen will be involved in replicating features of the house.

Van Loben Sels says Blue Room was chosen to design the reconstruction because Arbor Crest has had a working relationship with McLean for a number of years.

"He was the mastermind behind our current tasting room and our River Park Square location," van Loben Sels says.

Arbor Crest hopes to reoccupy Cliff House by next January. Once restored, the mansion once again will be used for family gatherings, business entertaining, and occasional winery tours, van Loben Sels says. The family prefers to maintain it as a private residence, so it is rarely open to winery customers.

Blue Room began operations in Spokane in 2006. It has four Spokane employees, and also has an office in Seattle. Other recent projects undertaken by the firm include medical facilities in Seattle, Tacoma, and Ellensburg, and a condo that combines a law office and living space in a downtown Spokane building.