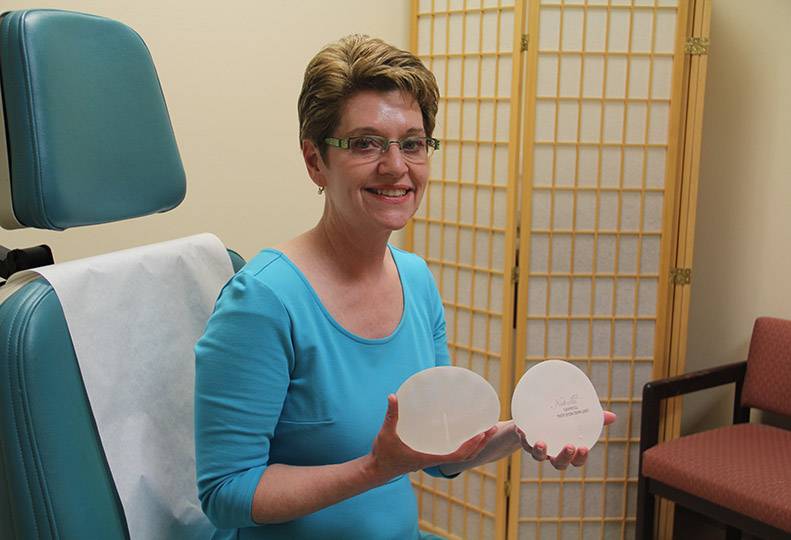 -—Staff photo by Jessica Valencia
Dr. Carol Hathaway says up to a third of the breast surgery patients she sees come to her practice for reconstruction after undergoing mastectomies. 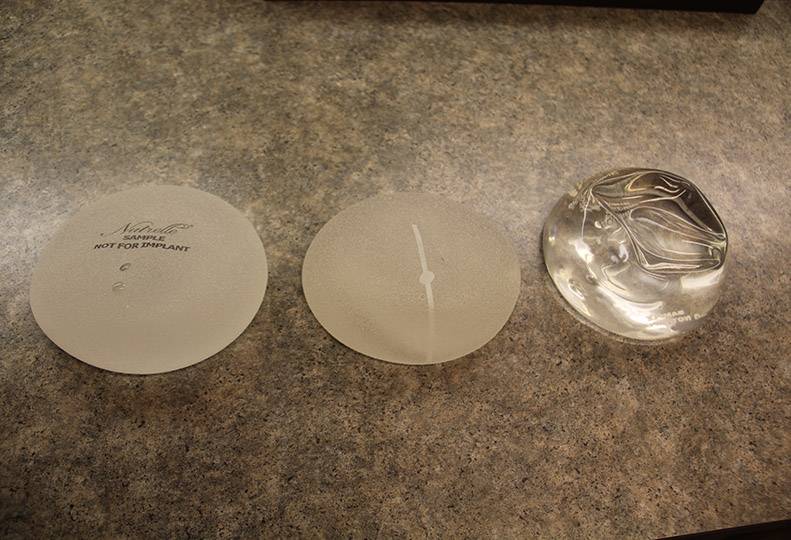 Dr. Carol Hathaway, a certified plastic surgeon based here, says medical advancements in biopsy and mastectomy techniques in recent years have enhanced reconstruction options for patients, aided in part by newer implants available in the U.S.

She estimates between a quarter and a third of the breast surgery patients she sees come to her for breast reconstruction after mastectomies, adding that some of the patients are hesitant about the procedure.

"They're not even sure if they want reconstruction because their mind is wrapped around surviving," Hathaway says. Once the surgery is complete, she adds, patients often say they're happy they opted for reconstruction.

Mastectomies are carried out by general surgeons typically.

"To be able to leave the majority of the skin leaves a much better outcome," Hathaway says.

For breast reconstruction procedures, it typically takes at least two surgeries, she says, although some patients undergo more.

She says biopsies have changed as well, with more being done as nonsurgical procedures, also known as percutaneous biopsies, as opposed to going under the knife.

"It's led doctors to realize they don't need to take as much skin as they used to, and the less skin they take, the better your construction options," she says.

The recent addition of shaped breast implants, such as those available through Sientra Inc., which have been on the market for about a year, provide more options for breast augmentation and reconstruction surgeries, Hathaway says.

"Until the Sientra (implant) came into the market, all implants were round," she says.

Hathaway declines to comment on how much she charges for a breast augmentation procedure. The American Society for Aesthetic Plastic Surgery says although the cost varies based on location and surgeon, the national average for breast augmentation using silicone gel implants in 2012 was $3,900 for a pair. The organization estimates it takes up to two weeks to recover from the procedure.

"Just because you reconstruct (a breast), doesn't mean it matches," Hathaway says, as to why a symmetry surgery might be needed.

She says using breast implants isn't the only option patients have after a mastectomy. Patients can opt for a flap reconstruction surgery, which uses skin and fatty tissue from the abdominal muscles for breast construction. Another option that's become more popular in recent years is a skin-sparing mastectomy, she says. In that type of procedure, the tissue of the nipple and areola are removed, and breast tissue is extracted through the opening.

Along with Hathaway's main office and operating room on the second floor, she also runs an aesthetic clinic on the first floor that is part of her practice and includes facials, chemical peels, and Botox injections, among other services.

The practice employs seven full-time workers including Hathaway, and six people part time, including those who staff the operating room.

Hathaway says she performs operations on Tuesdays and Thursdays and typically handles outpatient procedures on Wednesdays.

She estimates about 80 percent of her practice is dedicated to aesthetic-related procedures, such as breast augmentation. About 70 percent of her patients come in specifically for breast-related work.

The Sientra implants come in three shaped versions that are round, oval and oblong, with more volume at the base of the implant, as well as two traditional round versions. Hathaway says the shaped implants are textured, while the round implants are available in both smooth and textured versions.

She says the texture keeps the implant from sliding and shifting after surgery, which is more of a concern for implants that are shaped, since they're asymmetrical.

"If they're somebody who's doing a lot of activity, I may choose to put a textured implant in so it doesn't move as much," Hathaway says.

Shaped implants provide more options for patients, Hathaway says, adding an appropriate implant size for a tall woman might not be the right size for someone shorter.

"Implants should be individualized for the person," she says.

The shaped implants provide more shape to the breast, for example creating more top fill on the upper portion of the breast, which a normal round implant can't provide, she says.

According to the American Society for Aesthetic Plastic Surgery, breast augmentation was the top cosmetic surgery for 2012, with more than 330,000 procedures, up 4 percent from 2011.

Hathaway says she mostly uses Allergan and Sientra brand implants in her augmentation and reconstruction patients. She says Allergan implants are a slightly firmer silicone gel implant than the Sientra implants. The Sientra implants, although softer, retain their form better, which is why the company is able to offer shaped implants, she says.

Along with the silicone gel implants, saline implants also are used, although those implants are softer and more water-like, Hathaway says.

The American Society of Aesthetic Plastic Surgery says that 72 percent of breast augmentation procedures last year involved silicone implants, up from 19 percent in 2006.

Sientra is the first company to enter the market in about 20 years, Hathaway says.

In the 1990s, concerns about the safety of silicone breast implants were raised with the U.S. Food and Drug Administration, pertaining to potential autoimmune problems. Thousands of individual lawsuits and class-action lawsuits were filed against manufacturers including Dow Corning Corp. and Bristol-Myers Squibb Co., both of which got out of the silicone implant business in the U.S.

She says litigation caused other manufacturers to leave the U.S. breast implant industry, fearing further lawsuits. In 1999, the Institute of Medicine, a Washington D.C.-based medical research nonprofit, released a report concluding its research found no evidence that implants cause autoimmune problems.