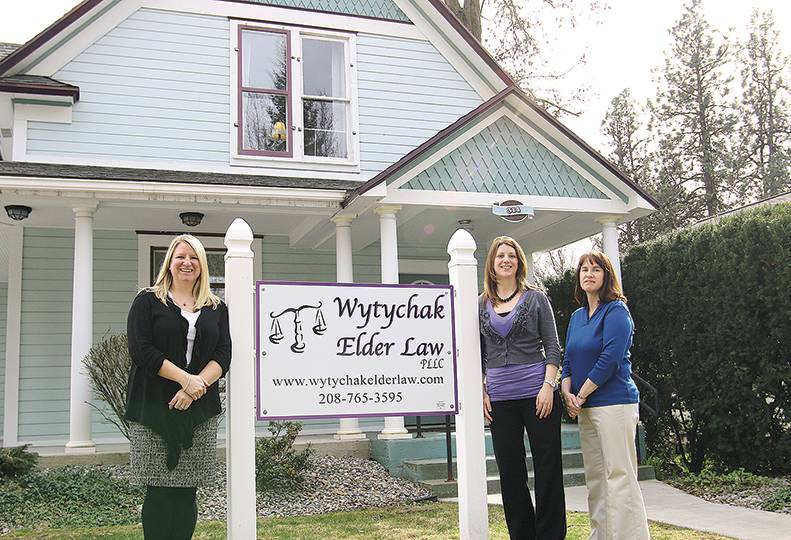 Issues faced by seniors and those preparing for retirement are more complicated than they were 30 years ago, says Michael Wytychak, who founded Wytychak Elder Law PLLC in Coeur d’Alene in 1984. Seniors need to prepare for the rising cost of living and housing, insurance matters, and being within reach of necessary services, he says.

“Some people are living in the middle of nowhere, and their health is such to where that doesn’t work anymore,” says Wytychak, pronounced WHY-tee-check. “It’s a social and psychological adjustment.”

Located in a converted two-story home at 314 E. Garden Avenue, Wytychak Elder Law specializes in handling matters of estate planning, such as wills, trusts, and powers of attorney.

Attorney Katherine Coyle, an associate at the firm, says that much of her work involves helping to prepare clients for long-term care if the need should arise. In some cases, Alzheimer’s disease, dementia, or other disabilities can make long-term care a necessity. Long-term care ranges from in-home, assisted-living services to a living facility where on-site assistance is provided around the clock.

“Care can cost thousands of dollars a month, and a lot of people can’t afford to pay out of pocket,” Coyle says. “There are government programs available, and we help them (clients) figure out whether they’re qualified for those types of services.”

Alzheimer’s disease and other forms of dementia are on the rise among seniors. An estimated 10 percent of seniors in Washington and Idaho have Alzheimer’s, according to a report from the Alzheimer’s Association.

“Really, it’s just making sure people know what their options are and helping to steer them into what’s the best option for them,” Coyle says. “Estate planning is for everybody, not just seniors and the elderly.”

She says she works alongside financial planners as she helps a client prepare for retirement. She makes sure that power of attorney has been executed and beneficiary designations have been set up on investment and other accounts, such as annuities and life insurance policies, and ensures that probate of estate is in place to make a will legally binding.

“A lot of people assume that because they have a will that’s written out that nothing else needs to happen, but really wills in Idaho are only brought to life when a judge declares it so,” Coyle says. “Probate gets a bad reputation. In a lot of other states, it can get really complicated and expensive and time consuming, but in Idaho, it’s pretty simple.”

Wytychak, the firm’s lone principal, founded the practice shortly after graduating from the Gonzaga University law school. While he was developing Wytychak Elder Law, he served as an ombudsman for the elderly in Kootenai County from 1984 to 1987.

Wytychak regularly speaks at senior homes and events about legal issues facing both the elderly and their families and caregivers. He also founded CareNet, a philanthropic network of businesses in North Idaho that helps professionals develop resources for the elderly. He says he’s transitioning into retirement, devoting the lion’s share of his time to research and marketing.

The firm also handles contested guardianships and will challenges, Coyle says. In the event a case does go to trial, the firm often works as co-counsel with a litigation attorney.

Within the next five years, Coyle anticipates the firm will bring on a legal intern and potentially another associate to expand the business. She says she wouldn’t rule out adding a geriatric medical professional.

“When I started practicing 30 years ago, the situation of seniors was pretty simple,” Wytychak says. “Nowadays, it’s blended families. Assets are much larger. Investments aren’t as secure. We’re all going faster in the fast lane. It’s better in some ways; it’s maddening in others.”