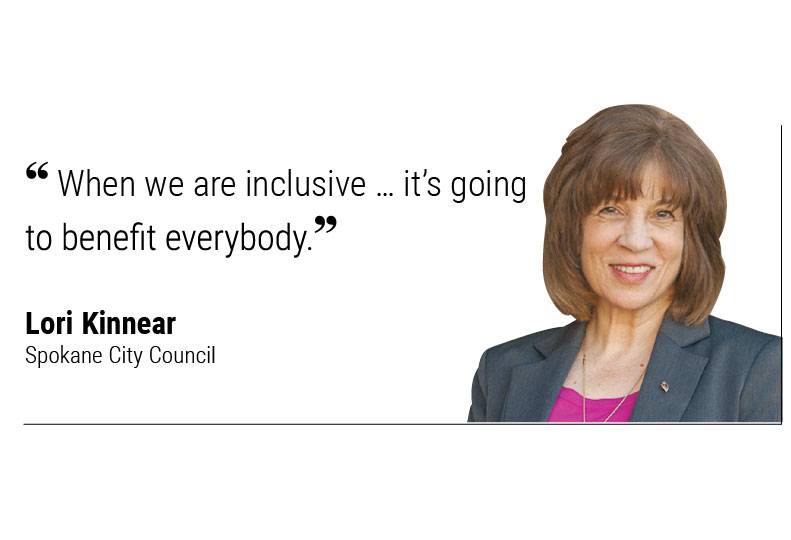 The city of Spokane will address citizen and employee civil rights concerns, as well as issues of equity and inclusion, through advocacy, education, and policy reform.

The Spokane City Council voted unanimously to establish the Office of Civil Rights, Equity, and Inclusion last month. Legislation describes the office as a provider of leadership and guidance in civil rights, equity, and inclusion, an advocate of increasing access to services, and a force against discrimination.

There’s been funding for an office for years, councilmember Lori Kinnear says, but the city was unable to find qualified employees to staff the office until recently.

Jerrall Haynes is now taking the lead at the civil rights office as its first director.

Kinnear says the city has maintained a role specifically focusing on culture and diversity for years. Under Mayor David Condon’s administration, the role of director of multicultural affairs was filled by Gloria Ochoa-Bruck, who was elected to Spokane Municipal Court last November.

However, NAACP Spokane past president Kurtis Robinson says that organization had been lobbying City Council to establish a formal office for civil rights since the chapter’s inception here more than 100 years ago.

“We’re behind the curve as far as moving things closer to that manifest reality of being a just, fair, loving, and transparent society, where the voice and the interactions of everybody matters, not just those who have influence and power,” Robinson says. “Having this office established here is critical in moving that ball down the court.”

Kinnear says that in 2016, shortly after she was elected to the council, a member of Spokane’s branch of the NAACP approached her to ask why, unlike other cities of similar size, Spokane didn’t have a civil rights office.

“I did some investigating and realized that other cities of our size do indeed have an office of civil rights, and there’s no reason why we shouldn’t. I put it in the budget that year,” Kinnear says.

Now, Haynes is tasked with establishing the office and guiding its role in the community.

Haynes was born in South Carolina and came to Spokane via his job with the U.S. Air Force. He was president of the Spokane Public Schools board from November 2015 until he declined to seek re-election last November.

The city ordinance that created the office states that it will work to eliminate discrimination in matters of housing, employment, and accommodations for all. The office is to handle complaints of discrimination that don’t fall under the jurisdiction of other government entities, as well as overseeing investigations into and resolving such complaints.

The office also will recommend policies to all city entities regarding civil rights, equity, and inclusion. Additionally, the office is expected to promote awareness through public education and outreach.

“One (role of the office) is going to be interfacing with our human resource department to strategize about recruiting so that we actually recruit people who are more diverse,” Kinnear says.

It’s especially important for emergency services and law enforcement to be representative of the community at large, she says.

“If you look at the profiles, our police department and our fire department are pretty male and pretty white,” she adds.

Gender and race, however, will be part of a multifaceted approach, Kinnear says.

“When you think of the office of civil rights, immediately, people think it’s about race,” Kinnear says. “Indeed, that’s only one aspect. Anything that you can think of that’s a marginalized group would fall under this umbrella.”

Kinnear says Haynes will focus on outreach and on building the office’s procedures, organization, and goals.

“He’ll be taking examples from places like Tacoma, or Boise, or Salt Lake City, and say, how’s it working here?” Kinnear says. “What’s going to work for Spokane won’t necessarily work for other communities.”

Haynes is one of two employees in the office, which is located on the second floor of City Hall. Kinnear says the staff will grow as the office becomes more established.

Robinson says he’s optimistic that the office will provide transparency as well as effective anti-discrimination work.

“We hope … that the mechanisms for dealing with these kinds of issues are not falling on the backs of volunteers from the impacted communities that are being affected by this,” Robinson says.

Kinnear says she’s aware that some in the Spokane community believe the office is unnecessary.

She adds, “When we are inclusive and make sure that everybody is contributing to our community in an equal and equitable manner, it’s going to benefit everybody.”

Kinnear says she hopes that the office helps to restore some of the trust and confidence that she feels Spokanites have lost in their city government.