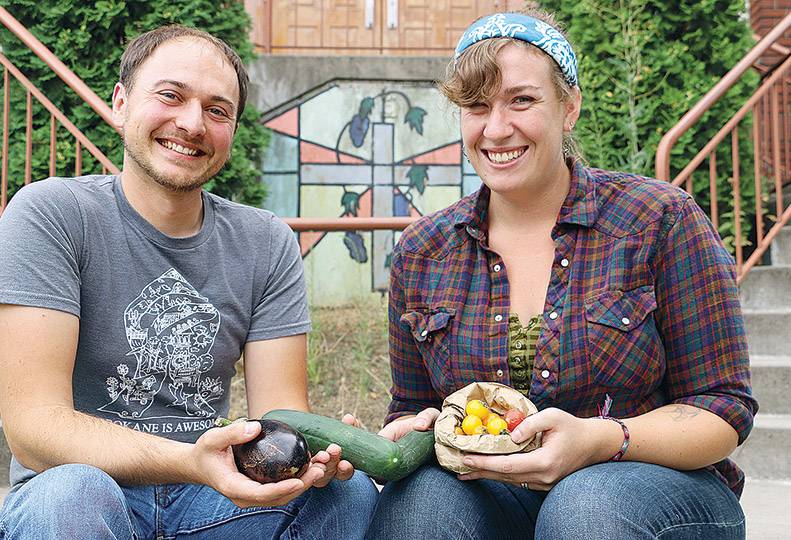 Robinette and Williamson founded LINC Foods as a cooperative corporation in late June through their business consulting firm, Camas Partners LLC, which they own with partner Jessica Anundson, also of Spokane.

The food co-op connects the farmers in the farming co-op, and other farmers here, to businesses within the Spokane area that purchase agricultural products, Williamson says.

Area farmers who have joined LINC Farmers will pay an annual $100 for membership, which will last until November 2015, Williamson says.

“We just gave people who joined before this November a few extra months,” he says.

While the two co-ops are separate, and may eventually grow large enough to generate sales outside of each other, for now LINC Foods sources as much food as possible through the farm co-op, he says.

The co-op currently operates out of a 400-square-foot office in the Liberty Park United Methodist Church at 1526 E. 11th in the South Perry District.

Williamson and Robinette are the only employees of the co-ops at this time, he says.

“As we add more employees, they’ll go through a probationary period, and then eventually be invited to join as an employee-owner,” Williamson says.

LINC Foods started out with just vegetable crops, Williamson says, but expects to have some fruit soon. It’s also begun connecting with local sources for meat, dairy, eggs, grains, and legumes, he says.

Williamson says that so far, the two have almost 20 farms signed up for LINC Foods for this season, which will be a pilot test for the program.

“That number will probably be what we have for this season,” he says.

Robinette says the co-op operates by enabling farmers to drop produce and agricultural products off at certain locations twice a week. She and Williamson then pick it up, spend one day doing minimal processing, such as chopping or slicing and bagging, and then make deliveries the following day.

“A lot of commercial places get stuff already sliced or chopped,” she says. “So we do some of that.”

Client businesses that want to receive the fresh produce do all of their ordering online through the LINC Foods website.

“Farmers upload available products (to the website) twice a week, and clients can also place orders twice a week,” she says.

Williamson says that the co-op’s website also enables the client ordering food to see which farm it came from.

“They can see the story about where the food came from,” he says. “Farmers (also) can see who bought their food.”

LINC Food’s first deliveries were on Aug. 11, Robinette says, to the Steam Plant Grill and Steelhead Bar & Grille restaurants, and to the Main Market Co-op, all in downtown Spokane.

Robinette says that the two are targeting universities, restaurants, and small grocery stores as potential clients for small farmers in the area.

“A lot of small farmers sell piecemeal, here and there,” Robinette says. “We wanted to open up the wholesale market.”

Some restaurants here that already strive to buy produce from local sources have expressed interest in LINC, Robinette says.

“For chefs to do local sourcing … it’s really time-intensive,” she says. “We want to keep that intimacy, but take out some of the time. We’ve had interest from restaurants here that we never thought would be interested. It makes the process easier for them.”

“Gonzaga has been a huge supporter; Eastern (Washington University) as well,” she says. “One of our huge goals is to sell to institutions. Gonzaga had a big meeting last October about how to get more local food.”

Because many of the farms around Spokane are small operations, it can be difficult for them to organize and sell their products to large clients, Robinette says.

“There’s just no way to tap into those small farmers unless you’re dealing with them one-on-one,” she says. “There was a need for someone to do that organizing and aggregating for them.”

Both Robinette and Williamson come from agricultural backgrounds. Robinette’s family runs the Lazy R Ranch in Cheney, and Williamson’s family is in the greenhouse business.

Williamson says that after attending undergraduate school at EWU and living in Los Angeles for a few years, he realized he also wanted to work in the field of sustainability.

“I realized I wanted to make a systems change … and business could be the end to the means,” he says. “I hadn’t thought about that before.”

Both Robinette and Williamson attended the Bainbridge Graduate Institute in Seattle, which specializes in sustainable business education. Robinette graduated with a master’s in business administration in 2013, and Williamson completed his earlier this year.

“We ended up meeting there,” Robinette says. “We were both from Spokane, and we both knew we wanted to do something in Spokane.”

The two formed Camas Partners with Anundson and started coming up with ideas for sustainable projects, Robinette says. The two ended up creating LINC Foods and LINC Farmers, which also became Williamson’s final project for school. It took about a year to finalize the project, and the two have been working on it full-time since last October.

“We didn’t know where it was going to go,” Robinette says. “We started working on food-related projects and kind of went down this rabbit hole. We came up with this huge list of crazy, audacious ideas and then narrowed it down from there.”

As an illustration of the need for a network like LINC, Williamson says that last year, Ken Meter, a food economist from the Crossroads Center in Minneapolis, Minn., came to Spokane’s and presented a report on the area’s farm and food economy. Meter’s report stated that consumers here spend $1.5 billion a year on food from outside the region.

“So it became, we want to help the farmers grow, import less food, and keep our money local,” Williamson says.

Meter’s report also claims that, on average from 1989 to 2011, farms in the Spokane region sold $908 million in food commodities per year, but spent $961 million raising the crops. Robinette says that all the small farmers the two have been working with thus far don’t make enough to farm exclusively.

“All the farms we work with require some money from off-farm to keep running,” she says.

Robinette contends that having a system like LINC Foods could be vital in the future, as natural disasters like the drought in California are affecting food production.

“Building that infrastructure will be really important,” she says. “With those droughts in California, for example, people can’t rely completely on imported food. Also, from a price standpoint, prices on imported food will go up.”

Another local angle to the co-op, Robinette says, is that it’s done all its financing here.

“We’ve done some creative things with local finance,” she says.

The co-op received grants from the Empire Health Foundation and the Inland Northwest Community Foundation, she says, as well as a $10,000 loan from a newer group, Local Vision Investing LLC, which has an interest in investing in food. Williamson says that the loan isn’t fixed, but rather revenue-based.

“As we make more, we pay more,” he says. “It comes out as a percentage of our revenue.”

“They loaned to us to buy some equipment now, but they know we can’t pay it back until next year,” she says. “We didn’t do any traditional bank loans.”

The business model is nontraditional Williamson says, but the two partners wanted it that way.

“It’s scrappy,” he says. “The whole model is really scrappy.”

One goal for the co-op in the next year, Robinette says, is to help farmers extend their season by freezing and drying their products, so they can be sold later.

Williamson says, “The idea is to, at the peak of a season, buy as much as we can, sell what we can, and preserve the rest. It helps us have steady sales throughout the year and have things that schools can have access to, since they’re out of session during peak season.”

LINC will possibly be looking into moving to a larger space next year, Robinette says. Williamson says the two also are looking to rent a commercial kitchen, which he says is difficult to find in this area.

The ultimate goal of the co-op, Robinette says, is to keep agricultural products, and spending, local.

“I would love to see everything we can grow in Spokane, be grown in Spokane,” she says.