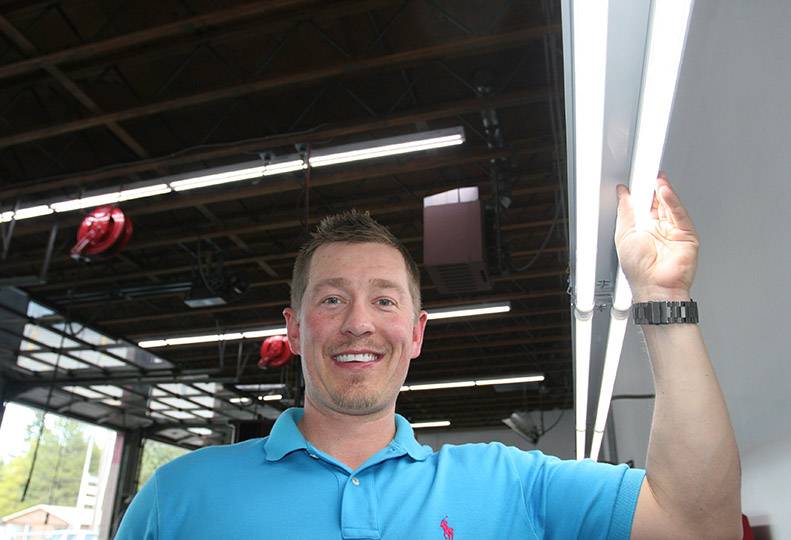 -—Staff photo by Mike McLean
Catalyst LEDs President Cory Turnbull says the young company's sales are expected to be in the seven-figure range during its third year of operation. 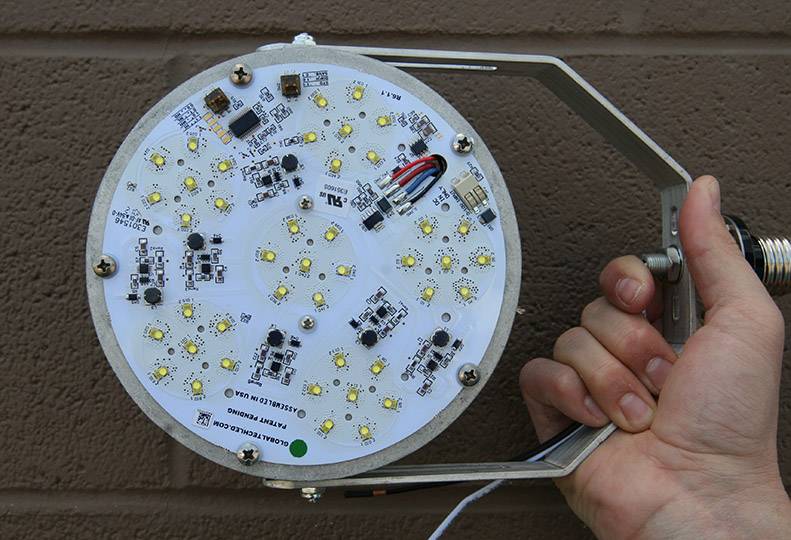 Cory Turnbull, president and owner of Catalyst LEDs LLC, says the outlook for the Coeur d'Alene company is growing only brighter.

Catalyst specializes in designing and distributing commercial and industrial lighting systems that use light-emitting diodes, rather than conventional lighting sources.

Energy used for lighting comprises about 40 percent of the electric bill for a typical business, Turnbull says.

"We can easily cut that in half," he asserts.

Turnbull, who has four years of experience with LED systems, founded Catalyst in 2011. Since then, the home-based operation at 737 Military Drive, northwest of downtown Coeur d'Alene, has grown to become a national player in the commercial LED products and systems market, he says.

In its second year of operation, the company more than tripled its sales over its debut year, and while he declines to disclose revenues, Turnbull anticipates the total dollar amount for third-year sales will be into the seven-figure range.

"Catalyst LEDs is getting a lot bigger," he says. "It was a struggle for a little bit, but now we're getting more recognition."

The company has no other direct employees, but has independent contractors here and around the country who handle marketing, sales, and LED system installations, Turnbull says.

Catalyst also works closely with independent contractors in Seattle, California, and New York on specific projects to do lighting audits and estimate utility and tax incentives for end users.

"Catalyst LEDs has groups or teams around the country that sell for us," he adds. "They use our catalog and we assist with technical support and marketing."

Catalyst orders directly from manufacturers and doesn't carry much inventory.

"We work with manufactures from around the world," he says. "We can offer multiple options to find the right products and price points for the customer."

Turnbull says Catalyst can have orders for customized systems filled and ready to install within four to six weeks.

While Catalyst has designed systems for industrial, retail, hospitality, and public sectors in the Inland Northwest, the majority of its sales are to energy-management companies, electrical supply houses, and electricians outside of the region, Turnbull says.

The company has drawn interest from huge potential customers, including General Motors Corp., he says. GM is testing a sample order of LED products designed to replace fluorescent light tubes in its manufacturing plants, and Turnbull says he expects the automaker to submit a second sample order this week.

"They're looking at retrofitting 72 plants around the world," Turnbull says. "It's a large opportunity."

Catalyst also is vying to supply LED components for lighting system upgrades at the Kaiser Aluminum Corp. plant here, a municipal water plant in California, school districts in New York, a hockey arena in Massachusetts, and city street lighting in Pennsylvania, he says.

The market isn't slowing down, he says, "It's skyrocketing."

While the company is seeing strong sales growth, Turnbull has no immediate plans to move Catalyst into dedicated commercial space.

"Maybe we'll do that down the road, but it's not something I'm working on today," he says.

One of Catalyst's showcase small-business projects is a new LED lighting system the company designed and installed at Lloyd's Tire & Automotive, at 3025 N. Government Way, in Coeur d'Alene.

The system supplies 40 percent more light using 70 percent less electricity than the fluorescent lighting system it replaced, Turnbull claims. In most of the shop, Catalyst replaced the old fixtures with LED fixtures that contain tubes that look like slender, 4-foot-long fluorescent bulbs. Each tube contains a row of 80 diodes that emits light that renders colors inside the shop much closer to colors seen under natural daylight than under conventional fluorescent light.

Avista Corp., the Spokane-based energy company, paid 40 percent of the total cost of the system, including labor, Turnbull says.

Lloyd's also financed the project with a low-interest loan offered through the state of Idaho's Office of Energy Resources.

Turnbull says the shop is saving $400 a month in energy costs for lighting, even though it now leaves some of the new LEDs switched on 24 hours a day for security reasons. Because LEDs emit less heat than conventional lighting systems, Lloyd's also realizes additional savings in its air-conditioning costs compared with the previous system, Turnbull says.

He estimates that the project, which includes all new fixtures, will pay for itself within three years.

"We rarely have a job with a return on investment of more than five years," he says. "As long as the ROI is within the warranty period, you're sitting pretty good."

The typical warranty period for LED components is five years, although a few warranties are up to 10 years, he says.

In addition to utility rebates, a current federal tax incentive allows for an income tax deduction of up to 60 cents a square foot for building owners with qualified lighting improvements installed through the end of the year, Turnbull says.