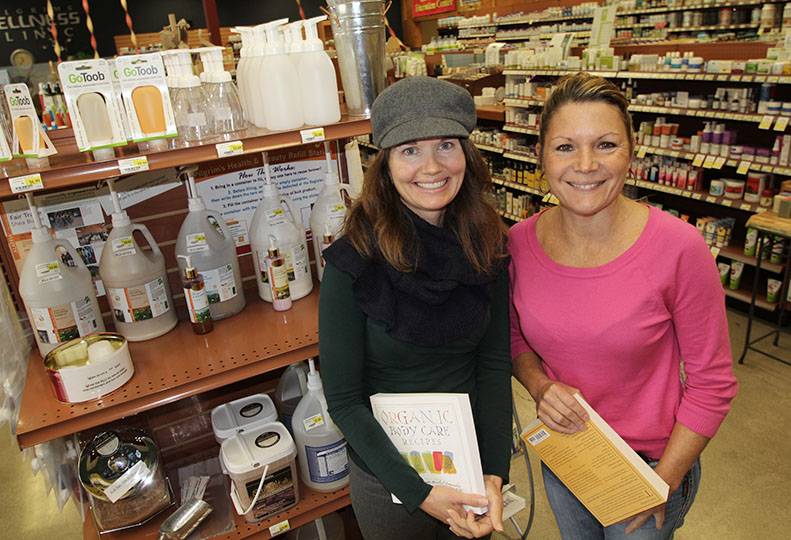 Rather, the two women share tips for how people can make homemade skin care and personal care mixtures, using just a few natural ingredients such as beeswax and essential oils that are heated up and blended. One recent session covered making a facial cleanser, toner, lotion, and night creams.

McMahon and Plum teach the evening classes held once every other month, using a mobile kitchen rolled into a lecture room at the back of the store.

Pilgrim's charges $10 a class per person, and the instructors say each class typically draws about 20 women.

McMahon and Plum contend the recipes provide health benefits for women who are more likely to buy skin care products in retail stores. As Pilgrim's health and beauty department manager, McMahon says she often hears positive feedback from women who say some mixtures she recommends ease skin conditions, such as eczema, which includes symptoms such as inflammation and itchiness.

However, she says some women seek ways to make homemade natural remedies for personal care and skin conditioning that use as few active ingredients as possible. She and Plum refer to recipes from a few books they recommend in the class, including one titled, "Organic Body Care Recipes."

"We feel you can have the cleanest product possible if you make it yourself," McMahon says. "We definitely get good feedback from the women who like the more simple skin products with one or two ingredients, as opposed to most typical off-the-shelf products with a myriad of ingredients."

Plum, a Pilgrim's employee who works in its supplement department, says that she and McMahon also talk during classes about potential health benefits from the natural ingredients. One example is lavender oil that can soothe burns while having a calming effect if used for aromatherapy.

"We want to explain why you're using it in the products you're making," Plum says.

McMahon adds, "I don't think we've ever had a guy in a class. It's women typically who are more interested in cooking or homemade products. We try to demonstrate between six and 10 recipes."

McMahon says the "cooking" oftentimes includes heating up water, an oil, melting beeswax, and perhaps adding cocoa butter to make a lotion. She says ingredients may go into a blender to add enough air to bring the mixture to a fluffy, spreadable consistency.

"You do have to melt and blend the ingredients," McMahon adds. "We use blenders. We use a stove. They definitely aren't difficult to make."

As another example, a recipe for a face treatment calls for a mixture of quick-cooking oats, almonds pulsed in a blender, honey, and milk or yogurt.

She and Plum also taught a class on natural mixtures for making toothpaste, sunscreens, a mouthwash, and an all-purpose cleanser. For a class scheduled on Oct. 24, they are set to demonstrate making a natural massage oil and bubble bath.

At the end of classes, participants take home samples of what McMahon and Plum make that they place usually in 2-ounce containers.

"They can test it, and if they like it, they can come back in and buy ingredients and make their own," McMahon says. "We say, 'Here's how you make lip balm, and from here you can add X, Y, and Z to tailor it to what you need.'"

The instructors also contend that more women today are concerned whether some ingredients found in commercial personal care products are absorbed into their body through the skin.

"I think women have more awareness that breasts hold a lot of toxins that can come from what you put on your skin and from the environment," McMahon says, referring to storage in breasts' fatty tissue and ducts. "We hear from women who want to clean up what they put on their skin as much as they can, using natural products."

Plum adds, "People use patches to stop smoking, and women use hormone patches as birth control, so it makes sense whatever you put on your skin is absorbed into your skin."

Plum also says hormonal changes during a women's life can affect their skin, particularly women as they reach menopause. She adds, "I hear from a ton of women looking for ways to deal with dry skin or with hot flashes and vaginal dryness, but they want to use products that aren't chemical-based."

"I'd say higher-end mall counter products are more expensive or as expensive," McMahon says. "Someone who is used to Jergens, they're going to have a little sticker shock. If you're buying higher-end products, you're going to be pleasantly surprised."

A 1-ounce bottle of essential oils can last for up to a year, Plum says. Essential oils include lavender oil, eucalyptus oil, calendula oil, and coconut oil. McMahon says the essential oils vary in price, "because some (plants) are harder to get the oil out of."

The oils also can be used in different ways, McMahon adds. "Some you use straight for aromatherapy. Some are great to use for cleaning. Some offer health benefits to the skin. Some have SPF (sun protection factor) benefit."

The product that McMahon says she most often recommends to women for skin problems is calendula oil, extracted from the calendula flower, known by the common name marigold.

"I like to point them to the calendula oil, which is in an olive oil base," she says. "We use it in a lot of our products because it has so many health benefits. It's anti-inflammatory, transdermal so it goes deeper into the skin, and there are documentations of it healing sun damage."

McMahon says the classes started near the end of 2012. At least one class has had a focus on making some medicinal mixtures, such as a cough medicine, with natural ingredients.

"We cover aromatherapy in pretty much every class," McMahon adds. "They (essential oils) have benefits topically to the skins, but the majority of their benefits come from inhaling, like lilac and chamomile causes calming. You get better sleep. Other ones help with energy."

She says she also recommends many Pilgrim's Market health and beauty products that are made with basic natural ingredients by business owners in the Spokane area, or within the Northwest. She adds that she uses some of those products for her own personal care as well.

Overall, McMahon says she believes women can take better care of their health by being as concerned about what goes on their bodies, such as natural lotions or sunscreen, as they are about eating more nutritional foods.

"If you're buying the ingredients, you know what's in something, as opposed to using petroleum-based products sold in a store," she says. "You don't need all the preservatives that give them a long shelf life. It's the whole taking control of what's going into your body and what's going on your body. Whether you're eating junk food or putting junk food on your body, it's not a good idea."

McMahon adds, "For women in our classes, the products are fun to make and easy. I think people enjoy the classes. We get feedback they just like the information about the ingredients. We're helping people get past the fact you have to buy premade stuff that they're just throwing fillers in."