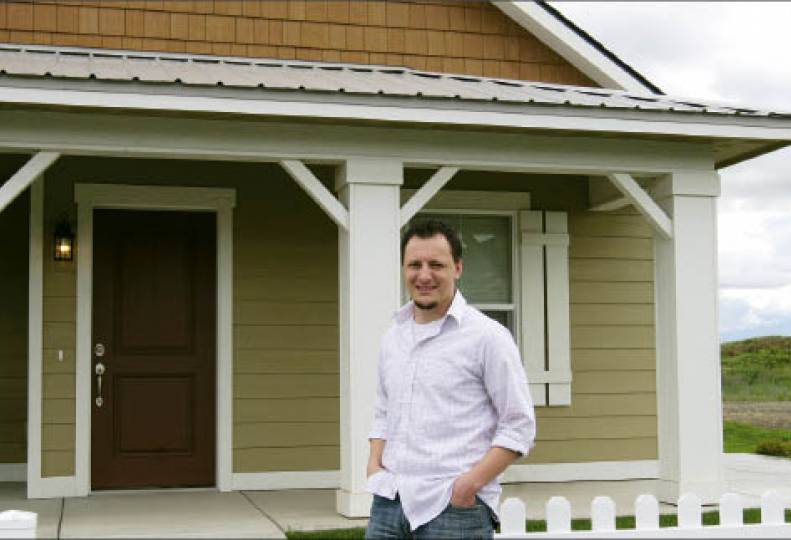 Amid the recent housing market slump, homebuilders and architects say that more of the homes being built here have smaller floor plans, to accommodate buyers who can't afford some of the bigger homes that once were more prevalent. That, they say, has meant paying greater attention to such things as space efficiency and dealing with the challenges of providing enough storage space for buyers and situating a homes on smaller lots, among other design considerations.

"We have spent a lot of time developing smaller and more efficient plans in the last year," says Jeremiah Steckman, manager of the architectural department at Greenstone Construction, of Liberty Lake. "It has been a huge trend of ours."

The main challenge with smaller floor plans, says Linda Davis, director of building relationships at Hayden-based Copper Basin Construction, is fitting in all of the necessary components and still using the space as effectively as possible to maximize the functionality of the home.

Says Gene Farris, owner and lead designer at Independent Home Design Inc., of Spokane, "Everything has to do with cost and finance. Housing being built now is much more realistic."

Steckman says his first step in designing a home is identifying how people will live in the space of the home.

"In reality, you can live in a different space if it is really efficient," he says. "You get the components you need, but not necessarily the oversized spaces."

"The key in using efficient design in our floor plans is sharing areas and eliminating hallways so we are not creating additional areas of travel across spaces," Steckman says.

In many newer homes the bedrooms are all located in one central area, instead of being off of one or two main hallways, he says.

Louie Bustamante, design manager at Copper Basin, says one of the main developments with newer home design has been the open-living concept.

"People want to live in an open environment where they eat, entertain, and recreate in the same area of the house," Bustamante says. "The essence of all that results in efficiency."

"It's definitely a challenge when you are trying to get the square footage down to manage the cost and still get a price that we feel the market is at," says Steckman.

One option offered by Greenstone is unfinished space in the basement, which gives a home buyer the opportunity to expand in the future, he says.

Providing an unfinished space in a home also cuts down on a buyer's initial costs, while still providing the desired space for storage.

Says Independent Home Design's Farris, "It's cheaper to finish the basement than build all the rooms on the main floor."

He says most homeowners are looking for storage areas big enough for large items, which can be provided by creating a storage space above the garage. The space above a garage also can be used for a family room, he says.

As an independent firm, Farris tries to take a more personal approach with his clients, by incorporating their needs into the design of the home. Yet, he says he often has clients who envision more space than will fit into a budget that dictates a home with 1,700 to 1,800 square feet of area.

Farris says his experience in home design allows him to give his clients a clear picture of what they can expect in the layout of a smaller home.

"I know basic bedroom, kitchen, and great-room sizes, and can tell them whether it will work," he says.

Creating a single great room consisting of the kitchen, dining, and living area is one way many designers are cutting down home sizes.

Another way, says Steckman, is by taking some of the space out of the master suite.

"We have taken some of the square footage out of the master suite and have laid it out more efficiently to provide a space where the furniture will still work," he says.

Designers still, though, are providing walk-in closets in master bedrooms, so buyers get the storage space they need, says Scott Krajack, sales manager for Eastern Washington at Viking Construction, of Hayden, Idaho.

"Closets are still a big deal, so you try and get a walk-in in the master. That is always a good way to sell a house," Krajack says.

Lot sizes in urban residential communities are another influencing factor when it comes to designing and constructing new homes, designers say.

"You can't put a huge house on a small lot," says Farris.

To accommodate the needs and lifestyles of buyers of newly constructed homes, some builders are offering blended communities, meaning there is a wide variety of home sizes and thus types of homeowners in each neighborhood.

Copper Basin's Davis says that company's blended communities offer a host of options for home buyers, whether they're married, single, retired, or have a family.

"You can get more house on less lot, or less house on more lot," she says.

Davis says that offering a variety of floor plans to buyers also helps them stay within their budget.

The average square footage of what is now being classified as a smaller-sized home ranges from 900 square feet to 2,000 square feet, builders here say.

Prices for homes in that size range can vary greatly, depending on location and amenities, but generally start around $130,000 and run up to about $200,000.

Homebuilders and designers contacted for this story say 75 percent to 80 percent of the homes they are constructing these days fall into the category of a small home, with under 2,000 square feet of space.

"The homes we are building today are certainly smaller. These homes were popular about 10 years ago before the big building boom of '04, '05, and '06," says Krajack.

During that period, Viking stopped offering some of the smaller home designs it had before, but lately, it has seen a substantial increase in demand for such plans, he says.

"A lot of the smaller plans we already had; this isn't something totally new, this is something that is back again," Krajack says.