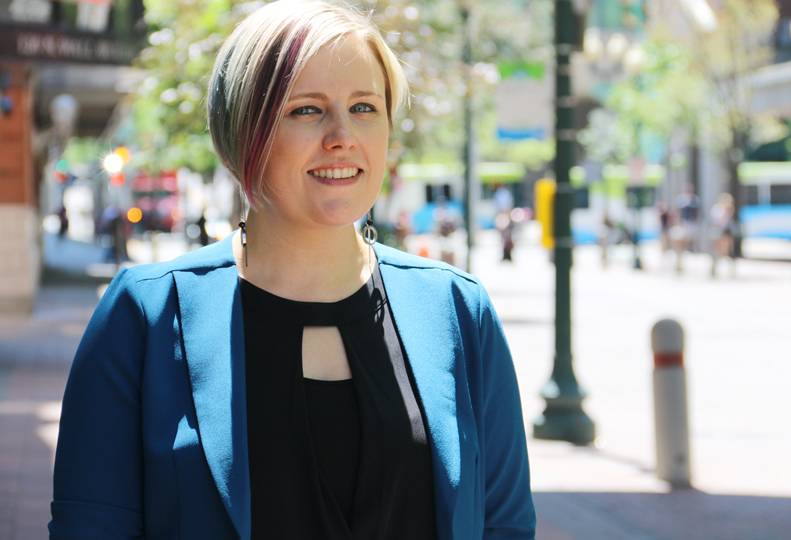 -—Natasha Nellis
Rebecca Long founded Future Ada to support women who are involved in STEM fields after facing discrimination and harassment in the workplace herself.

Two Spokane-area women are working to teach young women about the value of empowering themselves and other women to be their best selves and break through industry barriers.

At the high school level, Jaime Stacy works with students to help them find their identity and build the confidence to believe they can achieve whatever goals they set, she says.

Strong Women Achieving Greatness is a community-based empowerment workshop for young women and adults, Stacy says, that was born from her passion to help others. Stacy says she is working on establishing SWAG as a nonprofit.

Stacy says SWAG is built on three core principles: identity, relationships, and achievement. For identity, Stacy says she challenges the students to look beyond race and to eschew language such as “I identify as … .”

“SWAG is not strong white women, strong black women, strong Asian women; it’s strong women,” she says. “It is the culture of Spokane that there are a lot of mixed races … in the identity part of it, I had to say to them, ‘When you get a diploma, and when you succeed — what part of you succeeded?’”

There is no curriculum for SWAG, Stacy says. It focuses on building relationships and trust between students. The idea is to help them learn not to tear each other down, she says, but to instead learn to lift each other up.

“If you’re going to be a woman in leadership, you should be lifting up other women to a place where you’re at, and if they need a hand up from there, you’re lifting them up,” she says. “That’s what leadership is about.”

The group meets every Tuesday at 10 a.m. to talk about what’s trending on social media and how is it affecting women, and what women are doing about it, she says.

“We talked about the justice appointment … and we talked about the abortion laws,” she says. “We took out the ‘I feel like this’ … we took that element out to say this is a law, so when it’s a law you’re talking about a record, and it’s not just affecting you in the present but in the future. So, it’s a civil right. We talked about those things and who is most affected by that law.”

Stacy says she discusses social issues impacting women and helps the young women understand the importance of not only voting but understanding what they’re voting for and the future implications of their decisions.

Stacy says the numbers fluctuate week to week, based on the workload the girls have, but estimates between 30 and 40 girls attend a week.

The idea for SWAG was born when Stacy was brought into Rogers High School to mediate conflicts between students, she says. She wanted to create something that wasn’t a one-and-done program, but something sustainable that would help build relationships between students and mentors.

Speakers have included women who own their own businesses, she says, including a martial arts studio owner who spoke to the girls about mindfulness and managing their anger.

“We had another woman come in and not only was she a Rogers graduate, but she had been molested by her stepfather … so, we deal with the heavy stuff,” she adds.

Just being able to heal and grow is part of the achievement, she says.

“Achievement is not just education based to me, it is mind, body, soul focused,” she adds.

Since starting SWAG, Stacy says her students have been achieving higher grades and have had fewer behavioral issues at school.

Lori Wyborney, principal at Rogers High School, says, “(It’s) nothing short of total reformation. She has really given girls of color a place to go and be able to discuss all the things they feel like they can’t discuss anywhere else and give them a voice in our school, which has been the most beautiful thing in the world.”

Wyborney adds that staff has participated in SWAG programs with the girls, which allows them to see a different side of their students.

Stacy adds, “SWAG is just a small seed that’s been planted in their lives, and someone else is going to come along and water it, and they’re going to just keep going further and further.”

Ideally, Stacy would like organizations interested in hosting SWAG to begin to identify candidates for SWAG leadership who could be sent to her for training in the program and would leave with a certificate identifying them as a program leader.

Stacy says that within the next year, she would like to set up chapters in different states to expand SWAG services around the country.

SWAG currently operates a small group at Rogers High School and has been running for a year and a half, Stacy says.

“This is what it means to be a strong woman achieving greatness, you’re not giving up,” says Stacy. “I understand that there’s a lot of young women who don’t have a mother, a sister, an aunt who is showing up for them. Disappointment happens in that space between expectation and experience … and a lot of young women are walking around with that big ol’ hole of disappointment because no one showed up.”

Nonbinaries refers to people who don’t identify with a male or female gender.

“I’ve been in tech for 10, 15 years, and there’s not very many of us still; the diversity factor is pretty low overall,” she says.

Long says she founded Future Ada after experiencing sexual harassment and discrimination within the technology field.

“There’s still sexual harassment. There’s discrimination. I was experiencing a lot of that in various degrees, especially as I was getting closer to when I founded Future Ada,” Long says. “I needed support, and I keep running into people who need support and encouragement to stay in the field, to not give up in the field, to feel that they’re welcome to come into these industries.”

Long came up with the idea for Future Ada at a conference in Portland in 2017. The organization was incorporated in March of 2018 and was certified as a 501(c)(3).

About 40% of women in technology leave the industry after 10 years, Long says, because they want to work in careers where they feel welcome.

“Research is showing that it’s because they’re tired of dealing with harassment and the little papercuts that they have to deal with day in and day out, and they just get fed up with it,” she says. “So, we have all these high-qualified technical people, women and minorities, that are just leaving, they’re no longer going to be part of the solution for tomorrow’s problems.”

Long says she is working on a partnership with Girl Scouts of Eastern Washington and North Idaho.

The nonprofit works with Spark Central on one-day Django coding workshops to teach women and nonbinaries how to create websites. Future Ada hosts once-a-month privacy and security workshops for anyone interested and is currently in discussion with the YWCA to partner with its survivors of domestic violence program.

At EWU, the nonprofit piloted a mentorship program this year for women and nonbinary students in the computer programming degree that Long says she would like to expand to all the local universities next year. The program offered educational opportunities and helped students prepare for interviews and find job shadowing options.

“I want to ultimately have us work with the whole age spectrum,” Long says.

The group would foster that love for STEM fields at a young age, she says, and then continue to support women through college and beyond to help them stay in the field and break through industry barriers.

Long says it can be intimidating working in a field dominated by “nerdy white guys who fit the stereotypical Big Bang Theory style,” which can scare women away from entering the industry at all.

“We want to inspire them, and encourage them, and empower them to take on these industries,” she says.

Long says she hopes to expand the organization within the next few years by establishing chapters in different cities and countries to offer Future Ada’s services to women around the world.

“I’m a big advocate for diversity in all of our fields, but especially with the science, tech, engineering, and math,” Long says. “We’re solving all of our problems with various forms of technology, but if we only have a small subsection of our population at the table, their perception of what the problem is and how to solve it is limited.”

She adds, “It’s nothing against the white men who are dominating tech, it’s just their view is only what they can see and what they’ve experienced, and that’s limited. We all have limitations on what we can see.”

Long contends that it’s important for everyone, including men, to be involved in the conversation to help find a solution.