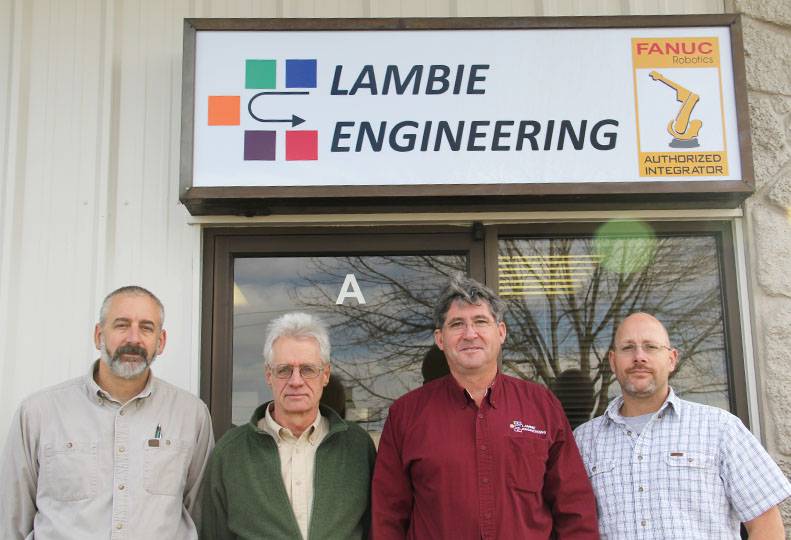 Lambie Engineering LLC, of Spokane Valley, is hoping to revolutionize the way companies fabricate parts through the concept of lean manufacturing.

One of the tenets of lean manufacturing, says Lambie Engineering President and owner Ken Lambie, involves using specially-engineered equipment to make only as many parts as are needed to meet short-term customer demand, thereby reducing waste and making product flow more effective.

"We make machines that make product at what the demand is," Lambie says. "In the lean community it's called 'right-sized' equipment."

Lambie Engineering, he says, makes machines that are smaller, produce fewer parts, or run at a slower pace so that companies can make only as many parts as they need, when they need them.

There are a few reasons, Lambie says, why a company might be manufacturing more parts than its demand necessitates. Some manufacturing machines are large and can only make parts in large batches. Lambie says companies also will make large batches of parts at one time to make up for the time and effort it takes to manufacture the part. There are also machines that produce parts at a faster rate than is necessary to meet demand. In these situations, the company ends up with a large surplus of parts that it isn't using, Lambie says.

As an example, in 2011, the company handled a project for the appliance division of General Electric Co., where it made the machines for manufacturing the front panel of two different dishwashers. Lambie Engineering made both a notch machine, which cuts metal like a cookie cutter, and a form machine, which bends the metal panels into the desired shape. The machines, which Lambie describes as right sized, were used to streamline the manufacturing process, he says.

Lambie Engineering also has worked on projects for a number of other recognizable companies, including Whirlpool Corp., Kenworth Truck Co., Boeing Co., and Spokane's Berg Cos. and Lloyd Industries Inc.

Lambie founded the company in 2010, he says. Prior to that, he was an engineer at Kimball Office, a unit of Kimball International Inc., in Post Falls.

Currently, Lambie and Tom Courrier are the only full-time employees at Lambie Engineering.

The company also employs two part-time workers, Josh Swenson and Tim Adams, who also pursue their own projects outside of Lambie Engineering.

Lambie is a mechanical engineer, Courrier is an electrical controls engineer, Swenson is a journeyman tool and die maker and computer numerical control machinist, and Adams is a millwright, welder, and fabrication specialist.

"Between the four of us, we have the capability to build sophisticated machines," Lambie says. "We all understand production flow and how important that is."

Lambie also says that the friendship between the four men contributes to the company's success.

"Friendship, trust, and respect create a cohesive team," he says.

The firm also uses robotics in some of its projects, and is certified by Fanuc American Corp. as a robotics integrator.

The company buys the device, usually a robotic arm, Lambie says, from Fanuc and then Lambie Engineering designs and makes the periphery equipment necessary to run the robotic device in a production cell.

Robotics, Lambie says, can be used to perform jobs that are repetitive, dirty, or dangerous for humans to do.

"In a lot of cases, there are really tedious jobs, very repetitive," Lambie says. "A robot can be used to automate those very repetitive tasks. That can be less expensive than the labor, depending on the situation. If the volumes are sufficient enough, we can replace labor with machine. It can also be dirty or dangerous, so from a safety standpoint, we may want to use automation."

Lambie says the company doesn't use robotics in its machines to replace human labor altogether, but rather to streamline the manufacturing process.

For the future, the company is focused on building its customer base, Lambie says. "Things are evolving," he says. "We're supporting more manufacturing companies." However, Lambie says, right-sized equipment can sometimes be a tough sell to companies that aren't familiar with the practice.

"We're looking to take our niche and move into other markets," he says.

To become certified, the company needs to have a documented quality system in place that meets the standards of the certification. Lambie says a consultant will be visiting the company on Nov. 15 to get the process started.